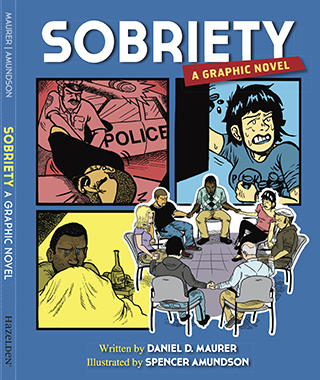 Talk to anyone who’s been through addiction and you understand two things: The person’s story is graphic, and it has the dramatic elements of a novel. In fact you’d think a graphic novel about recovery would have been done by now, it’s such a natural. But it hadn’t. Not until Daniel Maurer’s “Sobriety: A Graphic Novel” came out last November.

The book came about thanks to, of all people, Bertrand Russell.

“When I was in treatment I read Apostolo Doxiadis’ “Logicomix: An Epic Search for Truth,” which is about Russell’s quest for mathematical truth, and thought it was brilliant,” Maurer says over coffee at a Dunn Brothers in Minneapolis. “I thought, why couldn’t you do a graphic novel about sobriety?”

You could, and he did.

A congregation, wife, children, but …

Maurer does not come to writing from an MFA program. He comes from a seminary. He was an ordained Lutheran minister for 11 years, in fact, with his last stretch being in Williston, North Dakota. He had a congregation who cared for him, a wife who cared for him, two children who adored him. Yet he couldn’t stop breaking into people’s homes and rummaging for pills.

“I had gotten started on Demerol after going to the doctor for ulcerative colitis, and, man, from the moment I took it I knew this was what I wanted to do,” he says. “It seemed to solve all my problems. But then it led to all kinds of new problems.”

His addiction grew quickly. Before long he was doctor shopping and downing pills of all shapes and colors — Demerol, Tramadol, Klonopin, anything really, but mostly opiates — often washing them down with alcohol. At first he held off using until 5 p.m. Then he moved up the time to 2, then 11, then it was all day. Finally he got arrested for felony trespassing.

“I’d love to say that it was my higher power that led me to treatment, and that’s partly true, but it was also the Williams County sheriff’s office saying, ‘Mr. Maurer, you can either do treatment or go to jail for three years,’ ” he says. “It was a hard bottom.”

But he made it through to sobriety, with some relapsing, and tried returning to ministering in a half-time capacity. But his heart wasn’t in it anymore. He wanted to write. “I had always liked writing and reading and communicating, and it just felt like I should pursue this as a calling,” he says.

So he and his family moved to St. Paul and he enrolled in a master’s level course at the Loft. Before long he had completed a novel — “it’s on my hard drive but will probably never get published” — and had an idea for a new type of recovery book.

He pitched his graphic-novel idea to Sid Farrar, editorial director at Hazelden Publishing, and found a receptive audience.

“I was intrigued because I’ve never seen a graphic novel on addiction before, and I thought it could be a strong vehicle for us to reach some new audiences, in particular young people,” Farrar says in a phone interview. “I also liked Dan’s voice and message a great deal, and I thought the illustrations were good.” 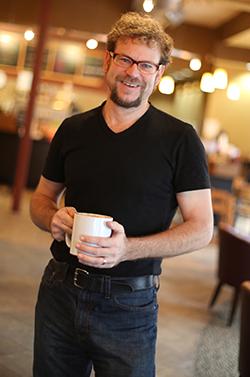 Farrar and Maurer agreed that they would tell the stories of five addicts, each facing a unique  challenge. They would turn out to be Larry, a construction worker who has been in AA for 30 years; Debby, a single mother in her third round of treatment; Matt, a teenage crystal meth addict; Hannah, a college freshman who steals painkillers from her friends’ homes; and Alex, a London native who arrives in Minnesota to get sober.

Maurer collaborated with his cousin Spencer Amundson, a student at MCAD, to illustrate the book, and the project came together in just six months.

‘Great for a younger audience’

It came out to glowing reviews from the recovery community. One fan is Jill Petsel, executive director of the Minnesota Recovery Connection. “I think it’s awesome. The book is such a great way to tell a recovery story, and is great for a younger audience,” she says.

Another is William Cope Moyers, who wrote one of the best-known addiction books in recent memory, “Broken: My Story of Addiction and Redemption.”

“In the arena of addiction and recovery, a graphic novel is a unique medium to engage young readers,” says Moyers, vice president of public affairs and community relations at Hazelden. “I couldn’t do it but Dan has pulled it off. It works.”

And in May something wonderful happened: The book won a Midwest Book Award. “I think it was the first time a Hazelden book had won a self-help award, so that was nice,” says Maurer. “But what’s most gratifying for me is when I hear from readers. They either thank me for explaining addiction to them, as now they understand what a loved one is going through. Or they’ll tell me, ‘I am Alex,’ or ‘I am Hannah.’ They see themselves in the book.”

He’s going to stay on the writing path. In fact he just had a new book just come out last month from Two Harbors Press called, “Faraway: A Suburban Boy’s Story as a Victim of Sex Trafficking.” And next he is working on a book about the spiritual side of resiliency.

After that he’s not sure. He’s learned not to dwell too much on long-term plans, but to follow his program of giving up control. And he still has his faith. If he needs to be reminded he just reads his arm, which has a tattoo in Greek that reads, “All things are filled up in Christ.”

Correction: A previous version of this story incorrectly stated what book award “Sobriety” won in May.

‘Why couldn’t you do a graphic novel about sobriety?’ You could, and he did