It’s not that Jennifer Tuder thinks her father’s death by suicide in 1997 was funny, but as a survivor of suicide, she does appreciate the uncomfortable form of gallows humor that exists around the topic. Most people, Tuder explained, want to avoid talking about suicide and its aftermath. One of the few ways the topic does enter the conversation is through the back door, in the form of wry jokes.

“When I say I lost my father, a person might ask me, ‘How did he die?’ ” Tuder said. “I want to be honest about his death, but many people still don’t know how to react to suicide. That can make it extremely difficult for me to tell the truth. I can still remember the first time I told a person that my father had died by suicide. She literally walked away.”

That reaction is why Tuder, associate professor of communication studies and theatre and film studies at St. Cloud State University, wrote and performs her one-woman show, “Suicide Punchline,” an archly humorous examination of the impact of suicide on the living. From Sept. 10-12, she’ll be staging a three-day run of her show at St. Paul’s Dreamland Arts. The performances are timed to coincide with national Suicide Prevention Week.

“It is really difficult to create a conversation about suicide loss,” Tuder said. “A big part of this show, and a whole character that I have created in it, represents an experience I’ve had many times, which is shutting down the conversation the minute I bring up the topic of suicide.”

Tuder doesn’t want the conversation to stop. In fact, she thinks our culture of silence is one of the reasons that suicide rates continue to rise in this country. Because we don’t talk about mental illness, she said, because suicide is an act shrouded in shame, many people don’t seek the help they so desperately need.

“The urgency around the issue has increased,” Tuder said. “I feel so strongly about raising awareness and educating people and helping them feel not so alone with this experience.”

Tuder was 21 and just entering graduate school when her father died. He was 53 years old.

When she was growing up, Tuder said she didn’t take her father’s overarching sadness all that seriously. He was in pain, clearly, but the family did not want to acknowledge that reality.

“For years, my father would say things like, ‘You would probably be better off without me,’” Tuder said. “He was suffering from depression and alcoholism, but when he talked like that I thought he was just complaining, looking for affirmation. I didn’t know that what I was listening to was actually suicidal ideation.”

A few years after her father’s death, Tuder began researching suicide and its survivors, piecing together a way to talk openly about the experience of living through the self-inflicted death of a loved one. A natural performer (“I’ve been on stage since I was 10 years old,” she said. “It’s my toolbox, the thing I go back to.”), Tuder felt driven to turn her work into a piece of theater that she could one day share with others.

“One of the great things about performance is that you get to be live in a room with other people,” she said. “Being in a theater with people around you all communicating and thinking about the same thing is a profoundly hopeful experience for me. It creates a community where there was none.”

Part of Tuder’s research involved building a collection of suicide jokes. “It turns out that joking is one of the major things we do to communicate about suicide,” she explained. “We don’t like to talk about it, so we laugh about it.” The fruits of that research turn up in “Suicide Punchline.”

While the idea of a suicide joke might feel unsettling for many, to Tuder that sort of humor makes perfect sense.

“My dad was someone who really enjoyed a good laugh, really had a strong sense of gallows humor, so the jokes are partly in there for him,” she said. “It’s also part of this weird experience I have as a suicide survivor: A joke that makes me laugh often causes this kind of uncomfortable laughter for others. I’ll get this uneasy chuckle from the audience every time I tell one these jokes.” And Tuder has to admit that she feels uneasy, too: Her laughter is always accompanied by a vague feeling of discomfort.

Suicide jokes range from the Rodney Dangerfield classic — “Last week I told my psychiatrist, ‘I keep thinking about suicide.’ He told me from now on I have to pay in advance.” To Tuder’s personal favorite, from playwright Noël Coward:

“On hearing that his accountant had shot himself in the head, Coward replied, ‘I’m amazed he was such a good shot.’” Tuder recounted, adding: “My dad was an accountant, so I’ve always thought that he would’ve appreciated that joke, but in the wake of his death, it’s harder to hear.”

Tuder, who has been on the St. Cloud faculty since 2002, developed “Suicide Punchline” five years ago, during a sabbatical. She’s since performed the show in several cities around the country, though this month’s performances will be her first in the Twin Cities.

She hopes that the “compact, 40-minute” show will strike a chord with other survivors of suicide loss.

“One of the things I’ve discovered through my personal experience as a survivor and as someone who is researching grief, was just how little there is out there for suicide survivors,” Tuder said. “What does exist is for people in the immediate aftermath of a suicide.” It’s almost like survivors are cut loose after the first few months, she said. 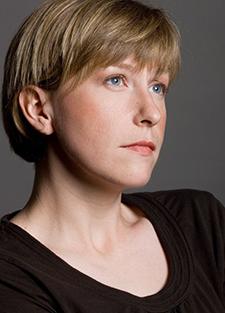 The show, which is timed to include time for post-performance discussion, is specifically designed to reach out to other survivors of suicide loss. Part of Tudor’s message is that while the pain of the loss never goes away completely, it eventually lessens, shifts and changes.

“I conceived this show as a kind of map,” Tuder said. “I collected as much information as I could about suicide loss and survival. Then I put together three separate characters that represent three major aspects of my grieving process.”

One of Tuder’s characters is called The Questioner. “She asks questions of an empty chair in the audience with a reserved sign on it,” Tuder said. “This character is me asking questions of my father. The very first line in the show is ‘Why?’ because that is one of the single most common questions suicide survivors ask. It turns out that there is no answer to that question. All of The Questioner’s lines are questions.”

Tuder’s second character is The Celebrant. “She’s a person at a cocktail party,” Tuder explained. “She steps back and forth between answering questions about Dad and spouting off research, jokes, other kinds of things. She’s always got a smile on her face and a martini in her hand. A martini was my dad’s favorite cocktail, so that felt appropriate.”

The third character is the most abstract of her characters, Tuder said: “I call her The Architect. She represents an inner spiritual journey and she speaks in poetry and does abstract movements.”

Less acute, but still in the background

In the years since her father’s death, Tuder has begun to realize that her grief “can feel very manageable. I can live it. Then it just rises up for a variety of reasons.”

An example is when Tuder went to her brother-in-law’s wedding: “I was watching the father-daughter dance — which made me think about my own wedding, which took place after my father’s death. I never got to have that dance with him. For a week or so after the wedding, I just kept feeling sad, thinking about it.”

Lately, she’s been learning to “sit” with her grief when it rises up, to live with it, and try to see what she can learn from her emotions. She wants to see if she can take her negative life experiences and make something better out of them.

Tuder said that she and her father had “a complicated relationship. We deeply loved each other; I can say that with certainty. But he was someone who had a lot of mental health problems and he wasn’t dealing with them at all. It made it hard to love him, to be around him. As I come to terms with that reality, I am learning to make peace with it.”

Creating “Suicide Punchline” was an opportunity for Tuder, who has been diagnosed with depression, to reflect on her own journey with mental illness.

“I’m also a survivor of my own suicide attempt,” she said. This attempt took place several years before Tuder’s father’s death, when she was a senior in high school. “It was very impulsive. I was really depressed. I felt like no one would care one way or the other if I died, and I tried to drown myself in the bathtub. I almost immediately regretted it. I’ve never attempted suicide again, as tough as things have gotten.”

Suicide felt like abandonment, Tuder said, and since her father’s death, she’s been searching for a sense of security, of closure, of forgiveness.

“The last line of the show is, ‘I’ll be here,’ ” Tuder said. “Saying that is an affirmation for me, something that I think all survivors of suicide loss need to hear. The thought that I had when I did attempt was, ‘No one will care if I die.’ I know that’s what my father thought before his suicide. But that wasn’t true: We all cared. Even as complicated as our relationship was, as hard at it was sometimes to be with my father, I can say with confidence that I am not better off without him. I wish he were still here.”

“Suicide Punchline” will be presented Sept. 10-12 at 7:30 p.m. at Dreamland Arts in St. Paul. Tickets are available online.

After her father’s suicide, playwright uses arch humor to start a conversation about survival