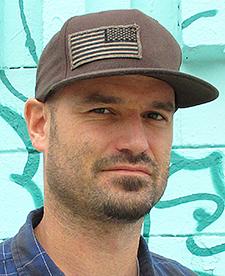 Back in 2006, when Paul Riedner enlisted in the U.S. Army as a deep-sea diver, he was an idealistic young man looking for adventure. Today, nearly 10 years later, he’s a slightly less young 37, but still idealistic and adventure-seeking, just in a different way. His four years of active duty in the United States and the Middle East changed his perspective on life and his goals for the future.

While Riedner, who holds a degree in economics from Carleton College and an MBA from the University of Minnesota’s Carlson School of Management, left the Army without significant physical injury, he did feel the acute stress of reintegration into the civilian world and the burden of living a life of meaning and character.

“Since being in the military, my conscience weighs on me,” Riedner said. “It allows me or doesn’t allow me to do certain things, and even though I have the education and skill set to go out and get a regular job and make some money, I just can’t do that right now. My conscience tells me I have to have meaning and purpose in everything I do.”

This August, Riedner found both when he accepted the position of executive director of Veteran Resilience Project, a nonprofit dedicated to helping Minnesota veterans get free access to Eye Movement Desensitization and Reprocessing (EMDR) therapy, a treatment that has been shown to be effective in helping veterans recover from the psychological trauma of war.

Access to EMDR therapy is key, Riedner believes, because suicide rates among Minnesota National Guard veterans are among the highest in the nation. He wants to save veterans’ lives.

For the last two months, Riedner has been working without a salary. His focus has been on grant writing, on finding sources of funding for his organization. He’s also been building connections in the veteran community, seeking ways to let veterans around the state know about the benefits of EMDR.

I spoke with Riedner earlier this week at Veteran Resilience Project’s headquarters, a shared office space in the Intermedia Arts building on Lyndale Avenue in Minneapolis.

MinnPost: What will the crowdfunding money be used for?

Paul Riedner: The money we collect will pay my salary so I can do the long-term fundraising for Veteran Resilience Project. We are in the process of writing grant proposals to places like Minnesota Veterans 4 Veterans, Minnesota DHS and a number of other funders.

The money will also help fund my travels around the state of Minnesota, where I will interview resilient veterans, meet veteran-service organizations and create audio programs that I will distribute online and to local and statewide radio networks. The idea is that I will interview and highlight stories of thriving veterans. I’ll ask them questions about what’s changed since they reintegrated into civilian life, what struggles they faced in the process and what their service means to them today.  I’ll also ask how they find strength and what support organizations they find the most useful.

MP: Have you identified any of the veterans you’ll be interviewing for this project?

PR: In order to find our subjects, we need to earn the trust of the people in the community. I think it will help that Veteran Resilience Project was created by veterans. I’m a veteran, too. I’m hoping that will give us a leg up to making those connections.

I’m still in the early stages of identifying potential interview subjects. There’s this veteran I’d really like to interview. He lives up North. His name is JJ. Every once in a while, he’ll gather up a bunch of veterans, women, men, guys from every era and from all backgrounds. He brings them out to the shooting range. They just get together. He doesn’t have his own organization. It’s not a VFW thing. I’ve been told he’s doing more for veterans in his area than a lot of official veterans’ organizations are. Through the strength of his personality, he’s transcending barriers. I want to tell his story, and I hope it will inspire others to get help.

MP: How will these profiles be distributed?

PR: We’re hoping to share these stories on radio stations around the state. We’re also going to do podcasts. I’m reaching out to radio stations and networks, and I will produce pieces that will fit for them, depending on what sort of programming needs they have. If they have 10 spare minutes, I can do that. If it’s five, I can do that, too.

The idea is that we’ll get veterans and their loved ones listening through these stories, and then we’ll let them know about Veteran Resilience Project and what we have to offer. Though the public mostly hears about veterans who are struggling, there are a lot of veterans out there doing amazing things. We want to hold them up and then show the community how post-traumatic stress can be turned into post-traumatic growth.

MP: And you believe that one way to do that is through therapies like EMDR, right?

PR: Yes. Our goal at Veteran Resilience Project is to offer this therapy free of charge to any Minnesota veteran who’s struggling with any re-integration issue. The list of conditions that EMDR helps include PTSD, combat stress, military sexual trauma, moral injury and any of the previous-era definitions of those things. We want to treat and heal the trauma.

MP: Can you tell me more about what the term “moral injury” means?

PR: Moral injury occurs when an individual is forced to make decisions that test their moral code. Going to war can be a moral injury in itself. We teach our kids that killing’s wrong, but then we ask a soldier to go and kill. This breaks down the individual’s sense of self. Moral injury doesn’t only happen in combat. It can come from a shift in perspective. For instance, some guys thought we were in Iraq for one reason and then, through their combat experiences, they came to a different explanation. When that happens in midst of your military brothers and sisters going through hell, that puts a big toll on your sense of the morality of what you are doing. It is an intense realization.

MP: So it’s an injury to a person’s moral code?

PR: Yeah. It’s a sense-of-self thing. Shame is huge in moral injury. An individual soldier may believe that there is something wrong with them because maybe they did or didn’t do something that they now look back at and feel shame about. Guilt is better than shame because guilt is, “I did something wrong,” whereas shame is, “I am wrong.”

EMDR deals with shame in a pretty unique way. It’s one of the therapies I think really does get to the core of the issue. Shame thrives when people are isolated and are not connecting with loved ones and others. It compounds anything a veteran is dealing with, whether it is a physical injury or PTSD. Treating shame can help clear the way for other healing.

MP: Can you tell me a little bit about EMDR and how it works?

PR: It is a therapy developed by psychologist Francine Shapiro. She was on a walk in a park and she was thinking about an upsetting memory. She noticed that the memory became less upsetting when she was walking, through the bilateral stimulation of right foot then left foot then right foot then left foot. That’s a simplified version of what happened, but it really was sort of an accident. Later, she researched the effects and started using EMDR on her patients. That was in the 1980s. The most traditional way doing EMDR is watching a finger from the left side of your field of vision to the right side of your field of vision while you think back on an experience or talk about an upsetting memory. Trauma locks up your brain. EMDR engages a different part of your body while you are observing the experience.

MP: How does this help a person move beyond trauma?

PR: It reprocesses the event, which has become frozen in time. In my understanding, the eye movement is similar to the eye movement we experience in sleep, during REM. During that period of the sleep cycle, the brain integrates information, puts it into the proper place and files it away. But trauma doesn’t get processed and filed away. EMDR creates a space where the brain can process the information, the feelings and the emotions in a healthy way. Then the person can find what’s useful in the experience and discard what’s not. During an EMDR session, the therapist and the client talk through what the body is experiencing when they are in this memory. Then they go through different sets of eye movements, and then the therapist asks the client again, “What did you experience?” And it will bring back insights and thoughts that they didn’t have before. Through this interaction with a therapist, a veteran learns make positive associations with that event and what it means in their life.

MP: So there’s been research backing up the idea that EMDR has been particularly helpful to veterans suffering from PTSD?

PR: There has been a lot of research on EMDR and veterans, but I am not well versed in the results. In 2014, Veteran Resilience Project conducted a pilot study with 27 veterans. We had an effectiveness rating of 73.5 percent.

MP: Does the VA use EMDR for veterans?

PR: There may be isolated instances of EMDR research and treatment among particular VA medical centers around the country, but it is not happening in Minneapolis.

MP: You told me that the Minnesota National Guard has the highest suicide rate in the country of any national guard.  Why is that?

PR: Nobody knows. This is a large group of Minnesotans who have been in service over the last 15 years. Since 2001, our National Guard has sent nearly 50,000 National Guardsmen to Iraq and Afghanistan. It has taken a toll.

MP: So you are saying the higher suicide rate among Minnesota National Guard members may be partially because so many Minnesotans have been deployed?

PR: They’ve really been put to task. They had one of the longest deployments on record when their tour got extended while they were in Iraq. So many Minnesotans have served in this war.

MP: You’re inching in on your crowdfunding goal. You’re not asking for that much money, just $15,000. That seems totally achievable.

PR: Money is only part of our goal. What we really need to do most of all is to reach the veterans who need us. We need to identify veterans to interview, and we need to let them know that help is available in the form of EMDR therapy. We need to get to the eyes and ears of people who know a veteran who is struggling. We need to connect with veterans so we can help them. We need to save lives.