When Brent Fuqua says Recovery Bike Shop is about more than bikes, it doesn’t sound like some Lance Armstrong bromide. He’ll say he’s not sure how he arrived at a place where he’s managing a 13,000-square-foot business that employs 15 and grosses more than $1 million a year. He’ll say it still feels the same to him as it did when he started it in a shed in 2008 to help him get through recovery. He’ll say he’s the luckiest guy in the world. Look him in the eye some time. You’ll see it for yourself.

“I consider myself more a steward of this place than the owner,” he says with a grin. “I just have a lot of reverence for what’s happened here.”

He should. It’s quite a story.

Fuqua, who today is 53, spent the early part his career as a journalist, reporting the news for the Bayfield County Journal in Cable, Wisconsin. He later started his own successful commercial photography business, and made a name for himself playing mandolin in bluegrass bands. He had a lot going for him. Then he got addicted to painkillers.

“In the summer of 2008 I knew I needed help,” he says from his desk in the back of his shop. “I completed a 28-day treatment program and then spent some time at Progress Valley Men’s Center at 30th and Garfield. That’s where it all started.”

A few bikes, and then more

As Fuqua discovered, behind the center was a 150-square-foot shed filled with abandoned bikes. Fuqua started working on them to keep busy, repairing a few for his friends. Suddenly 10 bikes turned into 20, 20 turned into 40. Before he knew it people in the neighborhood were walking their bikes to him for repair and the word of mouth grew like a Faberge shampoo commercial with spokes. That’s when he thought he might have a business on his hands.

It wasn’t some subtle sign from the universe that convinced him. It was an actual sign from his friends. It was called Recovery Bike Shop. “They brought that over for me and I thought, maybe I should start a business,” he said

And so he did. He moved to a garage in Uptown in 2009, then saw it outgrow that space, so he moved again to his current space on Central Avenue in northeast Minneapolis. All along he tried his best to keep up with demand. He’s still trying. The demand is intense. Last year the shop handled more than 7,000 bikes, about 1,000 of which get rebuilt and resold. It’s become a big operation.

Fuqua’s theroy is that there were forces at play other than just his mechanical acumen and his partner Seth Statmiller’s business acumen that drove this growth. He compares the business climate for him and bikes in Minneapolis in 2008 to that of Bill Gates and the personal computer industry in Seattle in 1968. Just a set of circumstances that could never happen again.

A ‘perfect storm of opportunity’

“It’s hard to fathom, really. Back in 2008, remember, Craigslist was just coming into vogue. That’s where we discovered we could sell a lot of bikes. And the economy was tanking at that time so a lot of people were looking to bike to work for practical reasons. On top of all that, Minneapolis was just starting to really take off off as one of the top biking cities in the country,” he says. “It was sort of this perfect storm of opportunity.”

Fuqua took it. He instilled core values at the outset that define its mission to this day. It uses as its slogan, Real Transportation For Real People. That’s a bit broad. But when asked to make it narrower, Fuqua doesn’t hesitate. 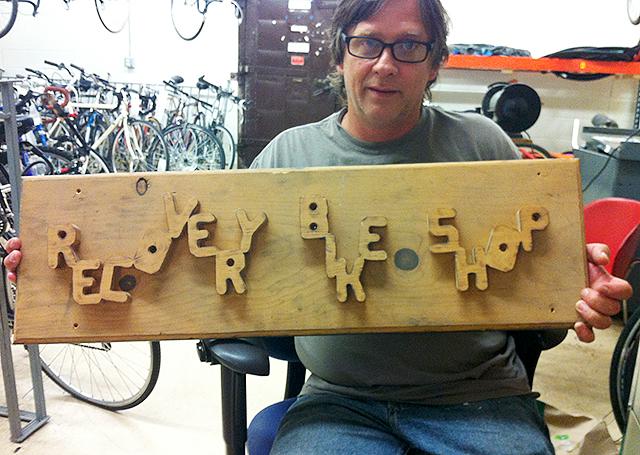 MinnPost photo by Adam Wahlberg
Brent Fuqua: “I consider myself more a steward of this place than the owner. I just have a lot of reverence for what’s happened here.”

“We help poor people get to work, that’s always what it’s been about,” he says. “Some people just can’t afford a car, or may not have a driver’s license anymore, due perhaps to their addiction struggles. We started this bike shop for them, and that’s still why we do it.”

Commitment to give back

The company puts to work many people in recovery, although Fuqua is quick to point out it’s not a requirement. But that pipeline is there, as is the commitment to give back, which is something he learned in recovery. The company donates thousands of dollars of service a year to people who can’t afford to fix their bike, and ships bikes around the world to communities in need. Coming up, it’s offering sober rides on Sept. 19 to the Minnesota Recovery Connection’s fifth annual Walk For Recovery.

It’s all unexpected, and it just keeps getting bigger, and that’s a good thing, but it’s not the most important thing.

“I consider myself as the keeper of the culture, the sweetness,” he says. “I’m the center. I don’t run the place; I really don’t. I go out to the scrapyard and organize bikes in the basement and talk to people about why they’re here. It’s sort of awesome for me. I’m just grateful for all of it. Once it stops being fun I suppose we’ll go do something else. But I don’t see that happening.”

The Recovery Bike Shop: a story you could never make up