Earlier this fall, Russell Herder, a Minneapolis-based public relations and marketing firm, won first place in PR Daily’s 2015 Digital PR and Social Media Awards for its work on KnowtheDangers.com, a website and social media campaign designed to educate young people about the dangers of synthetic drugs.

Carol Russell, Russell Herder’s CEO, was pleased that her team’s hard work was acknowledged by an influential group of its peers, but she didn’t feel like dwelling on the recognition. Awards are important, she said, but what’s more important is the focus of KnowtheDangers.com’s multipronged campaign. Russell said her team has worked hard to make sure that their message reaches its target audience: The stakes are high — higher than most of the projects they’ve worked on.

“We are dealing with a life-and-death situation,” she said. “Every issue is critical, of course, but with this project we are educating young people about the risks of synthetic drugs. This is an important issue — a matter of life and death.”

KnowtheDangers.com grew out of an initiative of Minnesota legislators. Concerned about the growth of synthetic drug use in the state, in October 2013 a subcommittee of lawmakers met with the Minnesota Department of Human Services (DHS) about the need to increase awareness about synthetic drugs, including synthetic cannabinoids, synthetic cathinones and vapor, all substances that aim to mimic the effects of illegal chemicals and may contain stimulant, depressant or hallucinogenic properties. The drugs, which are sold under names like K2, Spice, fake weed and bath salts, can cause hallucinations, rapid heart rate, seizures and even death. DHS agreed to create a website to educate the public; the initial funding came from federal dollars.

Over the years, Russell Herder has worked with the state on many projects; in 2014, DHS hired it to create the KnowtheDangers site. The first version of the campaign, which launched later that year, was designed to appeal to parents and teachers. Later, DHS leaders came back to the agency and asked it to add content to the site that would appeal directly to synthetic drug users.

“They said, ‘How can we better reach younger audiences? Because that’s really where the issue is focused,’ ” Russell recalled.

In response, Russell Herder created a social media education campaign designed to appeal directly to young people, by far the most common users of synthetic drugs.

To learn more about how to talk directly to teens and young adults about the dangers of synthetics, Russell Herder staff built focus groups, interviewed community stakeholders and partnered with youth-focused organizations like the McKnight Foundation-sponsored youth-advocacy organization Youthprise.

“We went to the field and did a lot of research, which was really interesting,” Russell said. “We did one-on-one interviews with law enforcement, emergency room physicians, and epidemiologists. We talked to young people who previously used synthetics, who were still using them, who had no clue what they were — the whole spectrum — just to understand that landscape firsthand.”

Brian Herder, Russell Herder co-owner and executive creative director, conducted many of the stakeholder interviews. These in-depth conversations with the people directly impacted by synthetic drug use helped the firm build a deeper understanding of the problem and imagine ways to communicate the dangers directly to synthetic drug users, he said.

“From our research, we went into the creative development process,” Herder said. “We brought the research team in to meet with our creative team to share their insights and determine what’s the next step.” They also invited young people from Youthprise to review the site.

To develop a look that would appeal to young people, Russell Herder creative team members turned to popular culture. 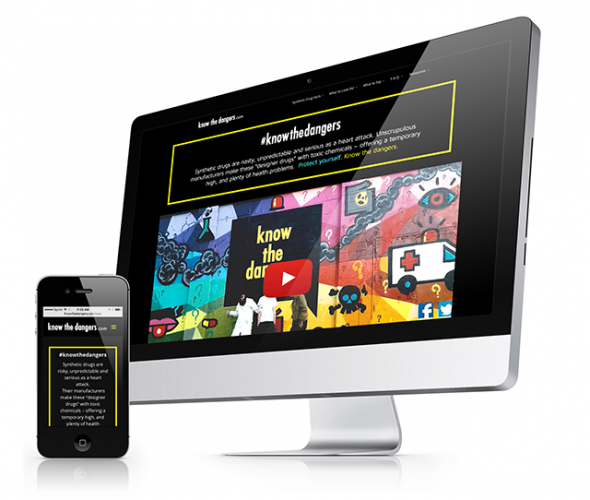 Photo courtesy of Russell Herder
KnowtheDangers.com grew out of an initiative of the Minnesota Legislature.

“One of the things we were looking at were the television shows that they’re watching,” said Seth Bohlken, Russell Herder art director. Part of the process was creating small, eye-catching icons that could easily be shared on social media platforms like Facebook, Twitter and Instagram.

“There’s not much we can show without advertising for these drug companies,” Bohlken explained, “so we wanted to make our own imagery. We wanted bright colors and something that would stand out off the page, but we didn’t want it to look fun. We wanted it to be something that a teenager could look at quick, get the message, show to their friends and share on social media, something that they would like to interact with as well.”

The result is a bright and almost playful — with an edge.

“We wanted it to be engaging and it had to work across the line,” Herder said. “We’re talking about a population that’s accustomed to blowing through information very quickly. We had to have an iconography, something that was very colorful, very punchy. It had to be the kind of ’80s color palette that is back now.”

Herder said that during staff conversations with young people, one message quickly became clear: When talking about synthetic drug use, tell the truth. Don’t preach about the dangers. Just give us the facts.

“This is an audience that is very, very savvy,” Herder said. The old, didactic messages of “Be smart. Don’t take drugs. Stay in school,” don’t work with them.

“When we show them concepts with statistics, they’re like, ‘I’m gonna look that up. That can’t be true,’” Herder said. “In fact, our challenge is to keep our knowledge up with theirs. You can’t dumb it down. You have to be direct.”

Bohlken explained that developers tried to create a site that places trust in its audience.  “This is a campaign that lays out the facts and lets the person decide,” he said.

This meant that an old-style “this is your brain on drugs” campaign wasn’t going to work.

“We did not want to glamorize these drugs,” Herder said. “There is a lot of drug messaging that inadvertently does exactly that. When the tobacco companies had to caution young people about smoking cigarettes they were really crafty about that back in the 1980s they were saying, ‘You are not old enough to make this decision right now. You should wait.’ They spent a ton of money on that messaging. If you want to sell something to a young person, the one thing to say to them is, ‘You’re not old enough for it.’ So we had to be very, very careful to make sure that there wasn’t an inadvertent effect in our messaging. But I think we walked that line pretty well, particularly because social media offers opportunities for the target audience to talk about their own experiences.”

While a social media campaign has the advantage of appealing directly to young people, it also has the advantage of being relatively low-cost, which was key, Russell explained, because, as a state-funded campaign, “Dollars were limited. This isn’t the reason that we were having young people do some of the creative, but it did kind of put a cap on what we could do. So we couldn’t do billboards across the state or something like that. That’s where social came in. That was very effective and allowed us to extend the reach.”

At times the campaign took on a DIY-feel, with elements like a brightly colored mural “billboard” painted by young artists with the help on an adult mentor that was splashed on the side of Minneapolis’ Intermedia Arts building.

The mural drew attention from the very audience it was intended for, said Rachel Patterson, social media director.

“We found that young people would walk by the wall and take a picture of it and share it with their social networks,” she said. The mural also included logos for Facebook, Twitter and Instagram, so photos inadvertently included information about where viewers “could connect for further information.” 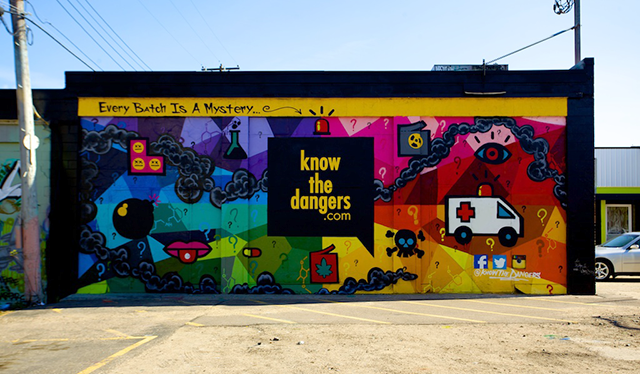 Consolidated Media
Social media director Rachel Patterson: “We found that young people would walk by the wall and take a picture of it and share it with their social networks.”

The budget did not allow for a major advertising push. “We used mobile ads as well as Pandora ads,” explained Matt Mudra, a member of Russell Herder’s digital team. “Pandora was a cost-effective way to reach this audience. We had a lot of fun taking the creative and researching ways to get in front of them with this message.”

“Partnerships have developed organically because of the social piece. We also used online advertising, which is so cost-effective and helped drive traffic to the website. Unlike doing a major TV campaign or billboards we just didn’t have the dollars for that so it had to be pretty guerrilla.”

Public messaging around the dangers of synthetic drugs is still limited, Russell said, and this meant that KnowtheDangers.com has found a surprisingly wide-reaching audience.

“The reach has been significant,” she said. The site has 2,000 followers and 36,000 unique visitors. During a three-week Pandora campaign, the site drew more than 9,000 visitors.

“Had it been a TV campaign, would it be more? Probably, but we are able to reach quite a few people and it’s really growing. There aren’t a lot of resources out there for this kind of information. As a result, we are getting a lot of traffic from CNN and places like that. When somebody is looking for expert resources, they are coming to the site.”

And so far, the client is also pleased with the results. “We’ve found that DHS is very open, so it wasn’t like we had to go in and make a major push to sell our ideas,” Russell said. “They were very much on board because it started from authentic research in the community. It was like, ‘If that is where you are getting the information, then that is what we should support,’ which makes our job that much easier. To have support like that is a really great thing. That way we can get this important message across to our target audience, which is just what we’re hoping to do.”