When Peter Hayden, Ph.D., went through addiction treatment more than 40 years ago, he was told that if he wanted his sobriety to stick, he needed to distance himself from his community.

“It was like ‘Mission Impossible,’ ” Hayden said with an ironic smile. “They told me I had to disavow my culture and my people in order to not get ‘caught,’ in order to stay sober long term.”

For Hayden, who is African-American, creating this kind of exclusive space for sobriety meant moving out of his neighborhood and distancing himself from family and friends.

“For seven years, I lived in a different community than the one I was raised in,” he said. “I dated different people than I had dated before. Not that I didn’t love these people that I became connected to, but where was my culture? Deep inside I felt alone.”

Hayden, who had the financial and emotional resources needed to resettle in a different part of town, has been able to find sobriety and stay sober for more than four decades. But from the beginning of his recovery journey, he knew that for many members of the African-American community, this “distance and disavow” approach to sobriety just wasn’t an option. And for those who could afford to make such a drastic move, Hayden understood all too well that the feelings of isolation that such a change could stir up might be enough to drive a person back to addiction.

So, with the support of his friend, colleague and co-founder Henry Sullivan, Hayden launched Turning Point, a culturally specific drug-and-alcohol rehabilitation program headquartered in his childhood neighborhood of North Minneapolis. Turning Point’s first incarnation was a halfway house, located in a run-down former physician’s home/office, at 1523 Emerson Avenue North in Minneapolis.

“We wanted to be in the center of the community,” Hayden recalls. He turned the building, which had earlier served as a halfway house for the Native American community, into a co-ed rehab program with beds for 16 people.

“It was a raggedy building,” Hayden said. “We had squirrels in the attic, cockroaches in the kitchen. But it was not what the building looked like on the outside that mattered. What mattered was what was going on inside.”

What was going on inside Turning Point was an experiment: a community-based treatment center designed to serve low-income African-Americans. After a few bumpy early years, the program began to take off, and Hayden (Sullivan had moved to the role of “silent partner”) worked to expand Turning Point’s services, moving beyond a singular focus on addiction treatment to a more expansive approach that addresses the varied needs of the program’s clientele.

Today, as Turning Point nears its 40th anniversary, the program is headquarted in an expansive, welcoming building at 1500 Golden Valley Road. Designed 18 years ago specifically for Turning Point, the building features corporate offices and meeting spaces as well as residential rooms for as many as 24 in-patient clients. Turning Point’s housing division also operates two low-income apartment buildings in the neighborhood for program graduates. And Turning Point’s original halfway house, now known as Ms. Bea’s House, has been converted into group residential housing with 32 beds.

“We are in the heart of North Minneapolis,” Hayden said. “We are serving the people I saw every day as I was growing up. We want this place to feel comfortable, to feel like a place that people can walk into and feel at home and safe and ready to work on their sobriety. At the same time it’s quiet and clean and professional, just like a Hazelden.” 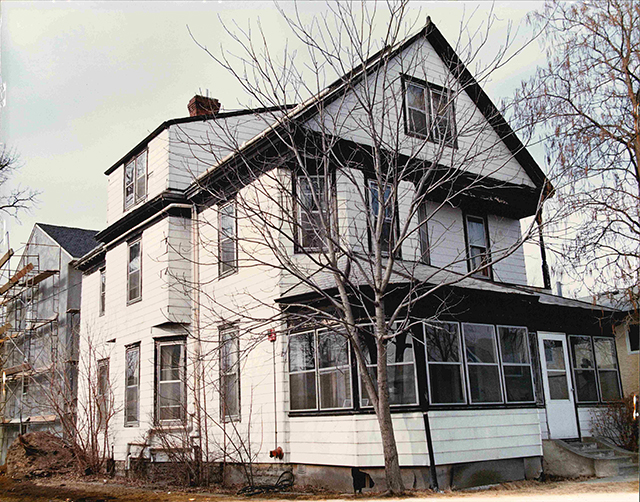 Courtesy of Turning Point, Inc.
Turning Point’s first location at 1523 Emerson Avenue North: “We had squirrels in the attic, cockroaches in the kitchen.”

Because they believe that substance abuse in the African-American community is tied up with other, larger societal problems like poverty and racism, Turning Point staff has built an expansive program that offers assistance to clients that goes well beyond the basic 12-step model. While achieving and maintaining sobriety remains a central goal, Turning Point also offers a wide range of services for clients, including marriage and family counseling, legal assistance, job training, health insurance guidance and housing referrals.

“We understand the community and the people who live here,” said Elizabeth Reed, Turning Point chief operating officer. “We’ve developed all of our programs specifically to meet our clients’ needs.” When a person comes to Turning Point seeking chemical dependency counseling, staff knows to look beneath the surface for the underlying roots of the problem, she said.

“A person might come to us to work on their chemical dependency problem, but if they don’t have housing, if they don’t have education, if they don’t have health care, they aren’t going to get sober. We understand that it is all connected. By providing all of these things in our programming, we are able to take that individual and not only help them overcome addition but also make sure that once they leave here they are not going right back to where they started.”

Turning Point is committed to supporting its clients over the long haul, Reed said.

“Our objective is to stay connected with anyone who comes in for at least three to five years. You have to stay connected, to be a family. That’s the tradition of the African-American community, that connection. We often talk about that village. So what we’ve done at Turning Point is create a village where anyone that walks in our door knows that they have somewhere to go for the rest of their lives.”

Reed came to Turning Point 15 years ago after a long corporate career at US West. Hayden believes that her steady, strategic guidance has helped the organization remain relevant and effective in a changing world.

“We started as a grassroots organization,” Hayden said. “What Liz has helped us to do with her leadership is to move us up from our humble beginnings into the national playing field. But we still manage to remain an institution where people can feel comfortable. Now we have generations of people who say, ‘I was in that program, my father was in that program, my cousin was in that program.’ It’s a legacy. When people walk by, they don’t say, ‘What is that building?’ They say, ‘That building is serving our community.’ ”

This fall, Turning Point was the subject of a yearlong best practices report conducted in partnership with the University of Minnesota’s Program in Health Disparities Research team and funded by the Office for Business and Community Economic Development’s Community Health Initiative.

The report found that Turning Point’s culturally specific approach to drug treatment is an effective model for members of the low-income African-American community. Other programs interested reaching this community may want to model their programs after Turning Point’s multifaceted, culturally focused approach, the report’s authors said.

Darryl A. Peal, executive director of the University of Minnesota’s Office for Business and Community Economic Development, said one aspect of the Turning Point program that was found to be particularly effective is its culturally sensitive “whole person” approach to addiction treatment.

“It is important that there are culturally specific treatment approaches,” Peal said. “The once-size-fits-all remedy doesn’t always work for everyone. What may work for an upper-middle-class suburban person who is chemically dependent may not work the same for someone who is part of the urban poor. Turning Point understands that.”

“We know we are an important resource to people in the local community,” she said. “We also want to be of assistance to the national addiction community.”

Elizabeth Reed and Hayden both emphasize that 40 years in, Turning Point continues to refine and shape its treatment methods and service offerings to meet changing client needs. The program has served some 24,000 people over four decades, and they are committed to serving many more.

“The community changes, and so do we,” Hayden said. He does not want Turning Point to rest on its laurels. “Even almost 40 years in, we’re still starting to grow. A pineapple tree just grows to one height, then after about 12 years, it just sprouts straight up. That’s where we’re at right now. We’re positioned for growth.”