At the 2015 Commissioner’s Circle of Excellence Awards last week, then-Minnesota Department of Human Services Commissioner Lucinda Jesson honored seven Minnesota-based human services programs for their outstanding contributions to the lives of their clients.

Jesson, who left DHS last week for a seat on the Minnesota Court of Appeals, said that traveling around the state to learn about the work of the different programs honored was “one of the very best things about being commissioner.”

She said that the programs and services the organizations provided had real, everyday impact on the lives of human services clients, including “the ability to remain independent, the chance to keep families together, the opportunity for better employment. It is a great calling to help our fellow Minnesotans live dignified and fulfilling lives and it is important that these exceptional efforts are applauded, their stories are told and ideas shared.”

The organizations “exemplify all of the great human services work happening across Minnesota,” Jesson said.

On Monday, I spoke with representatives from the three mental-health-and-addiction-focused honorees. They told me about their organizations’ unique histories and missions.

In the not-so-distant past, nursing home patients with dementia were routinely physically restrained in their wheelchairs and beds. The rationale behind this protocol was that by limiting residents’ movements, caregivers were keeping them from harming themselves. The use of restraints eventually faded after the public objected to the idea of confining elderly people against their will. 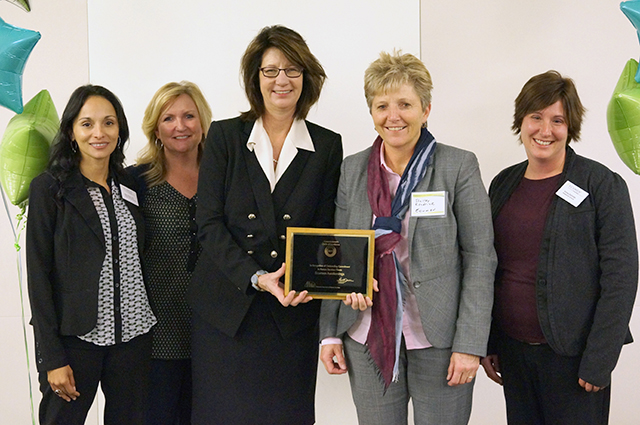 Starting in 2010, Ecumen, a Shoreview-based nonprofit that owns and operates senior-housing facilities in Minnesota, Idaho, Nebraska, North Dakota, Tennessee, Michigan and Wisconsin, changed its approach to caring for residents with dementia. Over a number of years, it has reduced or eliminated the use of antipsychotic medications in their memory-care facilities, instead relying on nonpharmacological and biomedical approaches. This new approach to care is known as Ecumen Awakenings.

“The problem of these medications was very much like the era when we used to physically restrain people in their wheelchairs and their beds,” said Maria Reyes RN, Acumen Awakenings program director. “We weren’t trying to be mean. It was out of a place of concern. But we learned that didn’t work, and we’ve found a better way to care for people.”

Last week Ecumen was honored by DHS for its Awakenings program, which, Reyes explained, was named for “the actual experience of when we first started to reduce medication for patients in a small pilot study. We saw that people were waking out of their drug-induced stupors and coming back into life. ”

“The strategies vary from individual to individual,” Reyes explained. “We are trying to learn who the client is, what their likes and dislikes are, what their historical patterns are, what hobbies they enjoy. As you start to provide things in lieu of medication, you start to find things that are of meaning.”

This approach, which is now standard in all Ecumen facilities, has been found to make life better for both patients and caregivers, she said: “When you know better, you do better. And that’s the approach we have chosen.”

Minnesota’s opioid addiction crisis has taken a particularly fierce hold on the state’s Native American population. The subgroup within that population that has been hit the hardest of all is mothers, said Amy Langenfeld, a certified nurse midwife who works at Minneapolis’ Indian Health Board.

Langenfeld and many of her colleagues in other agencies have seen too many pregnant Native women who are addicted to opiates lose their babies to adoption — or even to death. Four years ago, a group of care providers came together to build a coalition designed to give addicted Native American mothers the support they need to beat opioid addiction, give birth to their children and bring them home.

“We are working on the front lines in the trenches,” Langenfeld said. “Over the years, we have built connections with each other. We are people who are passionate about caring for the pregnant addict, particularly those facing opioid addiction. We’ve built a collaborative effort that traditional organizations aren’t able to do. We’ve stepped outside of traditional boundaries, and that’s what’s made us so effective.” 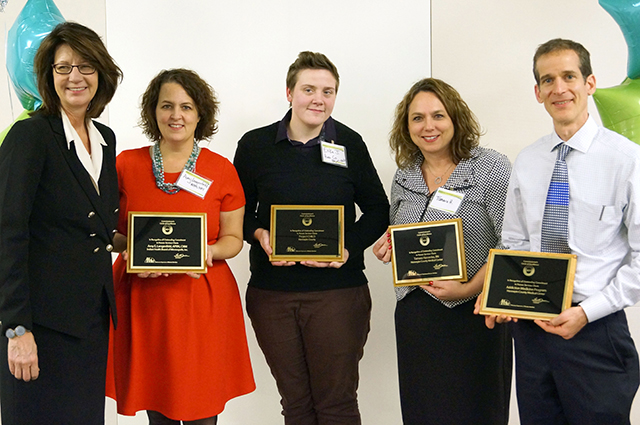 The group, which calls itself a “collaboration” because of its nonhierarchical, all-hands-on-deck approach, has seen significant success with the mothers it has served.

“I’m the entry point,” Langenfeld said. “I’ve had 68 women who’ve come to me as opioid addicts when they are pregnant. Since we started this collaboration, there have been just two women out of those 68 who have not taken their babies home from the hospital because of continued opioid use. I think that’s a significant number. That’s the piece I want to make sure we get out there.”

Much of that success should be attributed to the Collaboration’s unique focus on the needs of the mothers, Langenfeld said.

“So often programs like these are focused solely on the baby. Through our work, we have learned that by caring for the mother with honor and respect, you save not only the mother — but also the baby and the family.”

Being selected as one of the seven state honorees was exciting for members of her group, Langenfeld said. For the last 4½ years, they have been so focused on individual cases that they have not been aware of their work’s larger impact.

“When you have your head down and are working so hard in a tiny little office in a tiny little community clinic, you get to see individual lives change; that’s very rewarding and that’s what we’re all about,” Langenfeld said, “but then to have the state recognize our work as a group is a huge honor. It’s nice to know that someone out there is paying attention to all the work we’ve been doing. It encourages us to keep going.”

For nearly 50 years, the Rochester-based Zumbro Valley Health Center has been providing services for people with serious and persistent mental illness. Though the organization had been known for providing compassionate care to the region’s vulnerable population, administrators and staff wanted to provide wrap-around, integrated care for their clients.

“We saw that our clientele had several overlapping health issues,” said Sean Rice Zumbro Valley Health Center marketing and development director. A client in treatment for a mental health issue may also have a serious dental issue or a concern related to their physical health, he explained: “We were seeing a lot of people who weren’t getting all of the treatments they needed simply because they had to travel to too many different places to get them.” 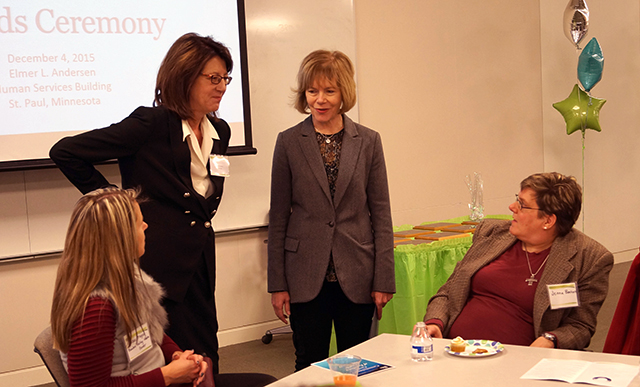 Beginning in 2011, Zumbro Valley Health Center began focusing on integration, offering clients services beyond mental health. The center first signed an agreement with Genoa Pharmacy, creating an opportunity for clients to have psychiatrists’ prescriptions filled in clinic. (“Psychiatrists were writing scripts but we weren’t seeing if clients were having those scripts filled,” Rice said.) Then, in 2012, they teamed with Apple Tree Dental to provide in-clinic dental care. And in 2013, Zumbro launched a primary care clinic on site.

This integrated approach provides Zumbro clients with an opportunity to care for all aspects of their health in one place, Rice said. And Center staff can work together to provide the best quality of care.

“Now we can have a primary-care nurse, a psychiatrist, a therapist, a chemical health counselor, a case manager, all talking together about Jane Doe and her treatment. That’s the unique piece. It is the truly integrated approach to patient care that we were aiming for.”

Last week, Zumbro Valley Health Center was recognized by DHS for its approach, which has seen significant increases in patient satisfaction and continuity of care.

“The recognition was important,” Rice said. It is a key public acknowledgement of something that staff and clients of Zumbro Valley Health Center have already discovered: “When we have multidisciplinary teams all talking with one another, care improves, and patients feel better.”