If you’ve driven just about anywhere in Minnesota in the last month, you’ve probably seen a billboard featuring a picture of a smiling, clean-cut person that read, “The Greatest Side Effect? Life. Carry Naloxone. Reverse An Overdose.”

The monthlong statewide campaign, sponsored by the Minneapolis-based Steve Rummler Hope Foundation, was designed to educate the public about Naloxone, a powerful drug that can reverse the potentially fatal effects of an opiate overdose. Naloxone is also known as Narcan.

The Rummler Foundation was named for Steve Rummler, an Eden Prairie man who died in 2011 from a heroin overdose. Rummler’s addiction started in 2005 after he was prescribed an opiate-based pain medicine for chronic back pain. After completing one in-patient addiction-treatment program and one pain-management program, Rummler turned to heroin when his painkiller prescriptions ran out.

The Rummler Foundation has been the driving force behind Steve’s Law, a Good Samaritan law that was passed by the Minnesota State Legislature in 2014. Steve’s Law provides people who alert authorities in the case of an opiate overdose with protection from drug charges.

“Over 70 percent of the time, there is a witness to an overdose,” said Lexi Reed Holtum, Rummler Foundation vice president. Thanks to Steve’s Law, Holtum explained, “people in Minnesota acting in good faith can call 911 to report an overdose — even if there is drugs or drug paraphernalia on scene. They will receive limited immunity from prosecution if they are calling to save someone’s life.”

An anonymous donor gave the Rummler Foundation enough money to run the billboards for 30 days in 40 locations across the state, Hotum said. The cost ran somewhere between $150,000 and $250,000.

“It was a generous donation,” she added. “This is somebody who feels this issue is incredibly important. They made a huge gift to us so we could put up this campaign. They felt it was important to educate the public about the issue.”

The campaign’s developers hoped that the billboards would have several effects. Increasing awareness about Naloxone and Steve’s Law were central, Holtum said, but they also banked on other corollary benefits.

“We didn’t want to limit this campaign,” Holtum said, explaining why the billboards’ messages may have seemed vague to some viewers. “We wanted to raise questions, to get more people talking about opiate overdose, and we thought that was a good way to do it.” The clean-cut folks on the signs? Real people who’d survived an opiate overdose, thanks to Naloxone, Holtum explained: “We wanted to show that people with addiction look just like everyone else. We hoped these images would help make the stigma around addiction disappear, that they would help people focus on the powerful, positive things that can happen when somebody’s life is saved.” 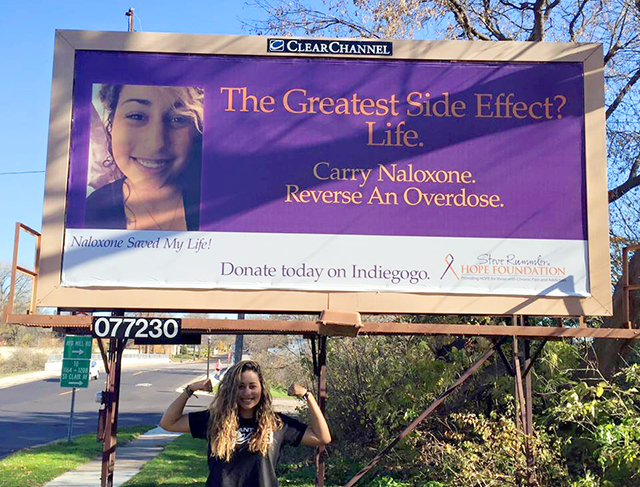 Courtesy of the Steve Rummler Hope Foundation
Jazmin posing in front of a billboard featuring her image.

The foundation also used the billboards to promote an Indegogo crowdfunding campaign focused on collecting donations to help fund and purchase Naloxone “rescue kits.” The Rummler Foundation’s kits, which contain doses of Naloxone, a breathing barrier device, an instruction card, alcohol wipes and gloves, are distributed to people who spend time around individuals at risk of opioid overdose, including friends and loved ones, staff at sober living homes and treatment facilities, church congregations, and colleges and community organizations. The Rummler Foundation assembles and distributes the kits statewide out of hospitals and emergency departments. They cost around $25 each to distribute, Holtum said.

“We had a huge stretch goal with the Indegogo campaign,” Holtum said. “We thought, ‘Let’s see if we can raise $50,000.’ We knew this would be a far-reaching goal.” At the end of the campaign, the foundation had raised 19 percent of their goal, but Hotum said: “We still consider that to be a success because we had many people talking about the rescue kits and what it is we’re trying to do with them.”

Positive response, but more work to be done

Response to the campaign has been positive, Holtum said. The billboards inspired important conversations about opiate addiction and overdose — which was just what the ads’ creators had hoped for all along.

“We had some terrific responses,” she said. “We had individual people reaching out to us, sharing their personal stores of not only lives saved because of Steve’s Law but also lives lost because of overdose. We had a really good amount of people responding and starting to have conversations around the topic.”

The more people who talk about addiction and overdose, the better, said Holtum. She was engaged to Rummler when he died, and launched the foundation with his parents. Steve’s mother, Judy Rummler, is the foundation’s president.

“We were very happy with the conversations that this billboard campaign started,” Holtum said. “We know that it had an impact. Was it enough? It’s hard to say yes, because there’s always more to do.”

Holtum talks about their being “more to do” because she believes that, despite the work of organizations like her own, the opioid-addiction crisis is still going strong in the state. Public-service campaigns help raise awareness about the dangers of opioids, she said, but the drugs are just so addictive and readily available that stemming the tide can sometimes feel impossible. Opioid addiction is a problem in every part of the state.

Take the town of Eden Prairie, for instance. “I live in Eden Prairie,” Holtum said. “Steve and I lived in Eden Prairie when he overdosed and died. Last month we ran this campaign. We had so many successes: We contributed to important conversations and maybe even to lives saved. But last month in Eden Prairie we also had three opiate overdoses. Two people died. One life was saved. That’s not enough.”

Holtum is passionate about the topic. It’s clear she’s in it for the long haul, committed to saving lives and changing attitudes about addiction. She took a deep breath and continued: “It’s a hard topic to talk about because no matter how many successes we have, there is still so much more to be done. There are so many more lives to save. Addiction is a nondiscriminatory, equal-opportunity disease that crosses all social and economic levels. It’s a brain disorder that can be deadly. And we have to treat it that way.”