For a big part of Tyler Skluzacek’s childhood, his dad, Patrick, couldn’t sleep. A veteran who had served in Iraq from 2005 to 2006, Patrick was awakened most nights by night terrors, intense, violent dreams that are a common symptom of PTSD.

“I was a kid, and our house was just big enough for me not to hear it,” Skluzacek recalled. “But as high school turned into college I noticed that my dad was really sluggish, tired, irritable, cranky. He eventually told me that he was having a hard time sleeping at night due to flashbacks of things that happened in Iraq.”

The whole family felt the impact of the elder Skluzacek’s sleep deprivation.

“Straight up, my dad was insufferable,” Skluzacek said. “He tried every pill in the book. He tried the VA-sanctioned therapies. They didn’t seem to work very well for him. He was frustrated and exhausted, and it took a pretty heavy toll on all of us. He wasn’t sleeping —and we all had to deal with a man that wasn’t sleeping.”

Skluzacek, who left his hometown of New Prague to attend Macalester College in St. Paul, assumed that his father would likely have a hard time sleeping for the rest of his life. But a little part of him always held out hope that some day he would be able to help his dad get the rest he needed.

Putting coding skills to use

It wasn’t clear how Skluzacek, a computer science, applied math and statistics triple major, would ever be able to help his dad. But then he was given an opportunity to focus his impressive coding skills on the problem.

In September 2015, Skluzacek heard about Hackathon for Health, an event held by the nonprofit HackDC in which coders, developers and medical professionals were invited to come together in the nation’s capital to develop ways that mobile technology could be used to help veterans cope with PTSD.

The event’s theme immediately appealed to Skluzacek.  “I thought, ‘I’ll show up and see what I can do.’ ”

When he arrived at the event, Skluzacek quickly realized that if he wanted to create something that would actually help veterans like his dad, he needed to jump in and learn everything he could about PTSD research in order to create the most useful technology. 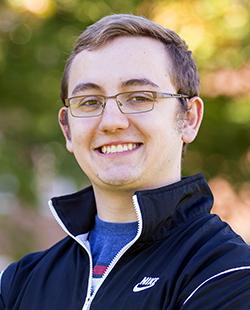 The 36-hour event was held “in a giant gymnasium,” Skluzacek recalled, “with tables set up in the middle. On the outside there were booths with technology companies, veterans’ associations, psychiatrists from the VA. If you wanted to go to the next level, you had to get your booty out of your chair and talk to these psychiatrists. A lot of people at the hackathon would not go talk to the psychiatrists, but my team spent a lot of time talking to the them and reading research papers about stress indicators that we could use in our project.”

The team learned that it’s not the night terrors themselves that take a toll on veterans; it’s the fragmented sleep the terrors create. After talking with researchers, Skluzacek and his team landed on the idea of inventing a smartwatch app that could detect and interrupt the terror without fully waking the sleeper.

The hacathon was intense — “Over the 36 hours, I got a total of one hour of sleep each night,” Skluzacek recalled, “but by the end, we were actually able to create a semi-functional glue-and-paperclips prototype.”

Skluzacek’s team, dubbed “The Cure,” won the event’s “Best Mobile Application for Clinicians” category. Their prototype, now known as myBivy, (for bivouac, or the light-weight, portable shelter used by soldiers), took home a $1,500 prize, or $300 each when divided by the five members of the team.

“That’s not that much,” Skluzacek said, “but it’s a lot for a college student who doesn’t have much money.”

Still, $300 isn’t enough to go from prototype to reality. The team knew it needed more money if they wanted to make their idea fly. They calculated the amount needed to get started and landed on $1,200 to $1,500. “We needed to buy one of every smartwatch,” Skluzacek explained. 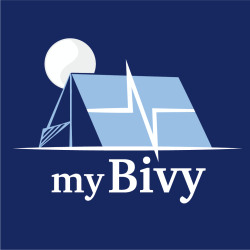 So they launched a Kickstarter campaign. Skluzacek’s pitch was very DIY: “I set up a camera stand and talked for five minutes about why our watch was cool, and how we needed money to develop it, and lo and behold, KARE 11 covered us.”

The local TV news report was picked up around the world. “All of the sudden there was a media flood,” Skluzacek said. Stories were written about myBivy in “USA Today,” “Huffingon Post” and “Gizmodo,” among others.

All the attention worked wonders for the fundraising campaign. “The $1,200 turned into $26,000,” Skluzacek said, and with the infusion of funds, work has begun on the app in earnest. “We still don’t have the money to do a lot of things, but there is a lot of expectation about this app now. Before, it was just about my dad and his Army buddies. Now it needs a mass release or,” he laughs quietly, “there will be mass outrage.”

Next step: clinical testing and development

The outrage will come from sleep-deprived veterans eager to try out myBivy, which Skluzacek is testing on his father.

The device works like this: “It is tethered to a smartphone,” Skluzacek said. Over several days and nights of wear, “The watch collects a whole bunch of data images. It does calculations and determines if and when the user is having a night terror.”

The technology will run on just about any smartwatch, including the Apple watch or the Samsung watch. “It will run on a Fitbit as well,” Skluzacek said.

“If myBivy detects that the wearer is having a night terror, at first it is going to intervene very softly,” Skluzacek said. “That may not be enough to take you out of your terror, but over time the app will determine the level of interruption that is needed and then adjust to that.”

Skluzacek’s father is a heavy-sleeping mechanic who’s often unaware of loud noises, so his watch had to be adjusted to the point where “he is almost jackhammered on his wrist in the middle of the night,” Skluzacek said. “But it takes him out of a night terror.”

In November, Skluzacek and his team participated in an event in Minneapolis called Mobcon, where inventors and developers bring in their ideas and pitch them to an audience of potential investors.

“There were CEOs, developers of massive apps,” Skluzacek said. “They all got to vote on the ideas. I presented my idea to 500 people. They voted and said that myBivy was the best app here. I won $20,000 in developer credits and $5,000 in legal credits.”

Skluzacek still has to finish up his senior year, but now myBivy’s development is moving quickly. “By March, we want to be in clinical testing,” he said. “We are looking at an overall release in May or June.”

While he stresses that myBivy is really more of a “cheater hack” or a band-aid than a cure — and that veterans with PTSD should continue to seek other therapies for the disorder while using his app — Skluzacek said that the myBivy prototype has been “wildly helpful,” for his own father: “He’s used it for three months now. His buddies are already outraged. They are seeing my dad healthy and full of energy. They want one, too. But I just can’t give it out to everyone. I have to make sure it is tested first.”