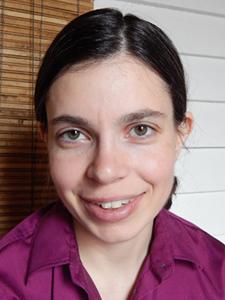 Few experts in first-episode psychosis have experienced the illness themselves. Nev Jones is an exception.

A decade ago, when she was a 25-year-old doctoral student, Jones began experiencing the subtle first signs of psychosis. Her experience searching for a mental health care provider who could help her knit the unraveling edges of her life back together ultimately led her to work a research scientist for the California Mental Health Services Oversight and Accountability Commission, a state entity charged with overseeing implementation of California’s Mental Health Services Act.

Jones, who has been diagnosed with schizophrenia, is a community psychologist, mental health services researcher and peer advocate who founded the Chicago Hearing Voices Network. She recently completed a post-doc fellowship at Stanford University. Her widely published research has primarily focused on psychosis across the age spectrum.

“I don’t know of a single other researcher doing work on early intervention in psychosis who has personal experience with psychosis,” Jones told me when we talked earlier this week from her home in Sacramento, California. “I am uniquely positioned, because I can bring together different perspectives and types of experiences in my work.”

Today Jones will be keynote speaker at a symposium on first-episode psychosis sponsored by the Minnesota Department of Human Services and held at the Earle Brown Heritage Center in Minneapolis.

MinnPost: Have you always been interested in mental health, or did your focus sharpen after your diagnosis?

Several years after my diagnosis, I went back to graduate school in psychology. Right from the get-go I wanted to study early intervention because I had experienced it myself. I understood the difference this intervention made in my life. I understood the potential it had to alter the trajectory of young people’s lives.

I know now that after my symptoms began appearing, I was very lucky to end up in an early-intervention program.

MP: Really? Why was that?

NJ: After running into a lot of roadblocks, I was lucky to get connected to what at the time was one of only a handful of early-intervention, first-episode psychosis programs in the country.

But I didn’t get into that program as soon as I started experiencing symptoms. I had some pretty bad experiences at first, including multiple contacts with clinicians who didn’t realize what was going on with me. Some were so stigmatizing that I basically ran away. At some point I ended at a county-operated clinic, a quasi-hospital. The intake nurse there talked to my friend as if I was not there. She said, “I’m not the one who does the form assessments, but I can tell you right now that she’s a skitzo.” This nurse acted like I wasn’t there and couldn’t understand English. Here I am, a first-year doctoral student, and this person is acting like I have the capacity of a 5-year-old.

After my friends and I made dozens of calls, I finally learned about a first-episode psychosis program in Chicago. I called at 7:30 at night: I didn’t think anyone would be there. But the clinical director herself answered the phone. She was night-and-day different from anyone else I’d talked to so far. She was sweet and caring. I told her what was going on. She said she wanted me to come in as soon as possible, which was 8 a.m. the next morning.

The next morning I met with her and went through in-depth assessment. She was a specialist in early psychosis with all this experience working with young adults. She was not at all alarmed by me — or by my experiences. When I reported the same experiences to friends and other clinicians, they looked at me with horror. She didn’t ask the same heavy-handed questions I’d been getting.

MP: What kinds of symptoms were you experiencing?

NJ: Early psychosis symptoms can be very different from full-on psychosis symptoms. They are a lot subtler. I would feel certain stuff, like my hands were blending into the arms of a chair, or the ground was no longer solid. My thoughts were very confusing and jumbled. I had quasi-auditory hallucinations, but not stereotypical delusions or hallucinations. The other health-care folks kept asking me, “Are you hearing voices?” It was subtle, so I couldn’t say yes. My world felt very off, but I couldn’t put my finger on why.

Mainstream clinicians with no training in early psychosis don’t know what’s going on in cases like mine. They are trained in recognizing symptoms of full-on psychosis. With symptoms like mine, which are actually common in early-onset, they don’t know what to think. They might say the symptoms are signs of depression. Or they might think a young person is on drugs.

MP: How common is it that a young person experiencing psychosis for the first time is misdiagnosed?

NJ: There is something called the Pathways to Care literature that has looked at the experiences of youth and young people en route to finally getting into psychological treatment. They show up at ERs and get turned away or they get admitted to an ER and then told that they have depression. They get misdiagnosed and turned away more often than you would believe.

MP: What is the average age when people first experience psychosis?

MP: Why is early intervention so important in cases of psychosis? If a young person makes it through their first psychotic experience, can’t they just put off treatment until they are older?

NJ: It’s important because all of this damage can be done early on that impacts a young person’s entire life trajectory. And it is important that the intervention a young person receives is high quality. A young person’s care team needs to jump in as soon as possible and make sure to control or contain any damage that their psychosis may have caused in school and at work or with family and friendships.

After experiencing a first episode, if a young person is treated appropriately, they may continue to experience symptoms, but that doesn’t mean they can’t be successful in school or work or get married or find a life partner. The most important piece is not symptom reduction but functional recovery. That means vocational and social recovery. But that kind of support is typically absent from people’s experiences in mainstream care. In my opinion, that is really the most critical piece: making sure that people have as much support as possible from a treatment team to help maintain those friendships, those relationships with family, work and school. That way you can help people keep working toward future goals.

MP: In your opinion, what is the gold standard for treatment of first-episode psychosis?

NJ: The ideal situation is a coordinated team where all clinicians are talking to each other and everybody is on the same page. That way care is integrated and includes a strong focus on educational and employment support and peer support and efforts to explore the young person’s experiences on their own terms and meet them where they’re at. Then people can get on with their lives.

MP: What is the life trajectory for people who are not treated promptly after their first episode of psychosis?

NJ: It’s very disheartening. The literature on people with psychosis suggests that between 75 to 90 percent end up unemployed, with low rates of marriage and romantic partnership. Only 10 to 15 percent of adults with schizophrenia are in a romantic relationship. If you look at the literature you will find that early intervention programs are absolutely crucial. They make a huge difference.

MP: Lawmakers agree with you on this point. The Federal Mental Health Block Grant Program has set aside federal funds for states to establish first-episode psychosis programs. Are many new programs up and operating?

NJ: This is the first time that every state has been asked to develop an early intervention plan. Many states, including Minnesota, have already started planning and developing them, but they weren’t instantly able to roll out interventions. The Minnesota State Legislature also set aside supplemental funds for this purpose.

MP: Once more first-episode psychosis programs are established, what’s the next step?

NJ: Early intervention is an important building block, but it is not the end. If we have more ambitious goals for young people with psychosis, we need to go above and beyond. We need to improve individual long-term intervention. We need to significantly increase the capacity within external institutions like community colleges and universities to effectively work with youth once they have been through these first-episode psychosis programs. We need to be able to help them get back to society. Right now the burden is entirely on the clinical team.