Ask Peg O’Connor a question, and more likely than not her reply will be more question than answer. A professor of philosophy, and gender, women, and sexuality studies at Gustavus Adolphus College, O’Connor has spent the last nearly 20 years teaching her students to fully examine their worlds in a search for truth and meaning.

O’Connor didn’t always give her own life the full examination it deserved. As a teen growing up in Massachusetts, and later as a college student at Wesleyan University in Connecticut, she abused alcohol until a near-death experience forced her to sober up.

This winter, O’Connor, a former AA Heckman fellow at the Hazelden Betty Ford Foundation and author of the popular “Psychology Today” blog “Philosophy Stirred, Not Shaken,” wrote about the intersection of philosophy and addiction in her latest book, “Life on the Rocks: Finding Meaning in Addiction and Recovery.”

“I use the greatest hits from Western philosophy to tease out concepts that are useful for people who are struggling with addiction and living recovery,” O’Connor explained. The book has been called “an indispensable guide to the deeply philosophical concerns at the heart of every addict’s struggle.”

Last week, I asked O’Connor about her thoughts on addiction, ethnicity and St. Patrick’s Day.

MinnPost: St. Patrick’s Day is coming up, and it got me thinking. Some ethnic groups — including the Irish — have a reputation for having higher rates of alcohol abuse. Do you think there’s any truth behind this stereotype?

Peg O’Connor: I think there’s definitely a belief that certain ethnicities drink more than others. But I’m wondering how much truth is actually behind that. I’m Irish-American on both sides of my family. But we’ve been in the United States for a long time. They came over here during in the Potato Famine in the 1840s. So I’m really more American than I am Irish.

What’s more interesting than the statistics is the overarching belief that some ethnicities drink more than others. On holidays like St. Patrick’s Day, that stereotype breeds a strange sort of logic. On days like that, we can justify our drinking by saying, “This is what my people do.” A mindset like that provides enormous cover for problematic behaviors. We can get drunk because supposedly it runs in our blood.

PO: There are two holidays I hate: New Year’s Eve and St. Patrick’s Day. They provide license for people to do things they normally wouldn’t do. People think these holidays provide a free space on the game board. Many bad things can happen because people have been given an official excuse to do dumb things.

MP: But addiction has a genetic component, right? It runs in families.

PO: I don’t think we have the answer to that question yet. Some of alcoholism is due to socialization. When you look at alcoholism within families, the question should actually be: “What’s the cause of alcoholism within this family? Is there a genetic component or are we talking about a general disposition, a way of looking at the world?” 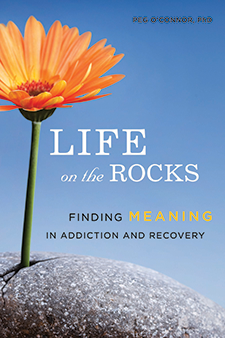 Is alcoholism socialization? Is it a learned habit? When there’s a celebration, does your family drink? Do you learn from other people in your family that it’s OK to drink when you’re pissed off? I’d say that alcohol dependence is a learned habit that is clustered in some families of some particular origins.

MP: So alcohol is built into the family culture?

PO: And into the culture of origin. I don’t know if I would say that alcohol dependence has to do with ethnicity as much as it does have to do with socialization. If you go to Ireland, there are pubs in every tiny little town. These pubs are full of Harp and Guinness and Jameson [Irish] Whiskey. There is harp music and dancing and the social life of the town revolves around the pub. In Ireland there is a true pub culture. Some of that has to rub off on the Irish people.

MP: Are there other places where alcohol is a central part of the culture?

PO: I think colleges are gigantic pub cultures. And a kind of mythology gets created around that culture. The attitude around drinking on some campuses is, “That’s what college students do.” We are all supposed to think it is just the way the world works. It provides some level of expectation for student behavior. My students say to me all the time, “I’m a college student.” Like that’s supposed to make everything OK.

MP: Tell me about your life with alcohol.

PO: I started drinking when I was 14. I was in Catholic school. My drinking escalated as my high school career went on. I knew I was an alcoholic by the time I was 16. I had a problem and I could identify it as alcoholism. I knew I drank differently from my friends. My drinking accelerated when I was in college. That is hard to imagine because in high school I was already a regular black-out, pass-out drinker. In college, I’d stop drinking for a time and then somehow I’d just start rolling again. I was a full-blown, raging alcoholic.

MP: You were an alcoholic at 16? How were you able to get access to alcohol?

PO: I started going gray when I was 16. I never got carded. I had no problem getting alcohol.

MP: You are sober now, and have been for several decades. How did that happen?

PO: How did I sober up? Kind of by accident. One day, I was going to meet up with some friends and I got t-boned by a pizza-delivery boy. I was almost killed. I had a severe concussion. I woke up in the CT scan.

I was in pain from the accident, but I knew if I started taking painkillers, it’d be “Betty Ford here I come.” Somehow I made a shift in how I looked at the world and I turned them all down. Looking back on that time now, I think that as a consequence of the severe concussion and the depression that followed I felt emotionally flat-lined. I didn’t give a rip that I had lived. I was truly indifferent to the fact I was alive. Then several weeks went by and I realized that I hadn’t had a drink. I said to myself, “I’ll see how long I can go with it.”

That was 1987 and here I still am. To me, sobriety still feels like an ongoing experiment. Things could change. Relapses just don’t happen, but there are a lot of steps up to that point.

MP: What lessons did your family teach you about alcohol?

PO: Now we’re back to the Irish problem. I’ll admit that there was always drinking happening when I was growing up. But I never label other people. I also know that it was at a time in the ’70s and early ’80s when there was so much more alcohol flowing everywhere.

MP: How did you get away with all that drinking when you were a teen?

PO: In the early 1980s there was an idea that adolescents couldn’t be addicted. So that gave me enormous cover. And we had a lot of stereotypes back then about who could be an addict, so a nice Irish Catholic girl from a good family couldn’t be an alcoholic. But I certainly was. I kept up my grades. I got into a good college. I was a high-functioning alcoholic.

PO: My college career can be described as falling in love with philosophy while nearly drinking myself to death.

In college I repeated a lot of the bad patterns that I had in high school. Working with college-age kids now I see the level of responsibility that they are taking for one another’s well-being. It’s really impressive. When I was drinking, I put some burdens on my friends that I didn’t understand. But I also know that I kept switching my friendship circles so I was never the one who drank the most.

MP: Now you’re a college professor. What are you observations about alcohol on campus?

This means that 20 percent of students on campus didn’t drink at all. Sixty percent drank sometimes. Another 20 percent drank a lot. What we are seeing these days is different. That 60 percent is emptying out. Those kids are not drinking at all or they are drinking really, really lightly. Then there are the kids who, when they drink, are really, really drinking. We are talking about blood alcohol counts (BAC) much higher than they were 20 years ago. Before, a .2 or.25 BAC would make your hair stand on end. Now we’re seeing BACs of .3 or .35. That’s not all that uncommon.

College females still aren’t binge drinking as much as their male counterparts, but those rates are going up. A lot of young women pregame drink. And since hard liquor packs more punch and they don’t want to drink too many liquids and have to use the bathrooms at parties, they drink hard liquor while they are getting ready to go out. Then they’ll go out drunk.

There are potentially really serious consequences for young men and women who are drinking in these really dangerous ways.

MP: How did you end up as a philosophy professor?

Both Kierkegaard and Nietzsche say that everyone suffers. Suffering doesn’t distinguish us. The meaning we make of our suffering distinguishes us. When I discovered this I thought, “I can’t just wallow. How do I transform?” I try to talk about that with my students.

MP: You didn’t exactly transform, you just worked your past into your present.

PO: If I was given the option to erase my years as an alcoholic, I don’t know if I would. So much has come from my addiction. It makes me a more compassionate person. It gives me insight and empathy with my students. It has taught me enormous humility. Because of my past, I realize that there is nothing great about me. I could chuck it all away at any time. It’s a relief to think that way, at least for me.

That brings us back to one of the stereotypes about Irish people. We tend to be pensive, deep thinkers. We really chew on things. We are natural philosophers.

MP: So I guess we’re back to the question of, “Is it genetic? Or a learned behavior?”