Minnesota-born explorer Ann Bancroft was able to achieve her dreams when she became the first woman to have stood at both the North and South poles. Meeting those lofty goals wasn’t always easy: As a girl, Bancroft struggled with a learning disability, but when a coach and teacher at her school took her under her wing, she blossomed, building the confidence needed to go places other women had never been before.

Because she realized the power that a little bit of support can play in building a girl’s confidence and helping her pursue her dreams, in 1997, Bancroft founded the Ann Bancroft Foundation. The nonprofit is dedicated to helping Minnesota girls realize their dreams by connecting them with mentors and providing the financial assistance needed to reach their goals.

Twice a year, the Ann Bancroft Foundation awards “Dare to Dream” or “Let Me Play” grants of $500 or less to Minnesota girls who wish to explore the outside world and recognize their own abilities. A volunteer mentor guides each grant recipient.

“The purpose of our grants its to help girls pursue their dreams,” said Sara Fenlason, Ann Bancroft Foundation executive director. Each grant is as varied as the girls who are awarded them, she explained: “A pair of girls went on a 50-day hike in the Arctic National Wildlife Refuge. A girl went to biology camp in New England. Some girls got to go to the Paris climate talks. A number of girls went to dance classes.”

The grants, while relatively small, are a vote of confidence in the girls who receive them, Fenlason said. To know that others believe in your abilities can help a young woman take risks and achieve.

“Ann points out that a girl who does not have confidence doesn’t dream,” Fenlason said. “She doesn’t hope. She doesn’t have goals. With our grant programs, we want to give girls a boost of confidence and self-esteem so that they are more successful in their lives.”

For the first 17 years of its existence, the Ann Bancroft Foundation kept a low profile, run quietly by its founder and a team of volunteers. But in the last two years, the organization has added three paid staff members, and grown in size, from an average yearly granting budget of $38,000 to $145,000 in 2016.

“I describe us as something of a best-kept secret,” Fenlason said. Until recently, “There was a little bit of pride in running skin-to-the-bone so that every dollar we brought in went right to the girls.” But a larger budget — raised from a combination of individual, nonprofit and corporate sources — has meant a bigger impact. “It has increased our ability to help girls,” she said.

Fenlason explained that at first, Bancroft thought that the work of her foundation would be so transformative that it would only be around for a short time.

“Ann thought that within a few years of helping girls, a foundation like this one wouldn’t be needed anymore,” she said. But it hasn’t worked out that way: “Girls still lag behind boys in confidence and self esteem — so we feel like there is still work to be done.”

“This event will bring in enough income to fund our entire spring grant cycle,” Fenlason said. Last year, the event netted $70,000. There will be videos and remarks from Bancroft, Fenlason, and grant alumnae and their mentors. There will also be live and silent auctions.

Because the foundation is not privately funded or based on dividend income, new dollars must be raised annually. “Every year we pull together the money and then we give it away to the girls,” Fenlason said. “It is not like Ann invested some big lump sum at the beginning, so this event is a big deal for us.”

When St. Paul twins Justine and Justice Webb first came to class at The Art of Dance, Linda Green’s Minneapolis dance school, the two girls were so shy and cautious that it seemed they would never make it through a recital.

“When they started here they were very little and very withdrawn,” Green recalled. Because Justine and Justice’s mother struggled with drug addiction, the girls were being raised by their grandmother and great aunt. “They were just 4 years old when I first met them,” Green continued, “and they barely ever came out of their shells.”

But Green, who founded her successful Washington Avenue studio after years of dreaming about opening her own business, quickly became an important force in the Webb sisters’ lives.

“I knew how to handle it,” Green said. “I turned things around with those girls. I knew how to give feedback, how to stand next to them and go through the dance with them. With Justine, I’d approach her with her with a smile on my face and say, ‘I know you can do it.’ Soon, the were starting to believe what I was saying.” 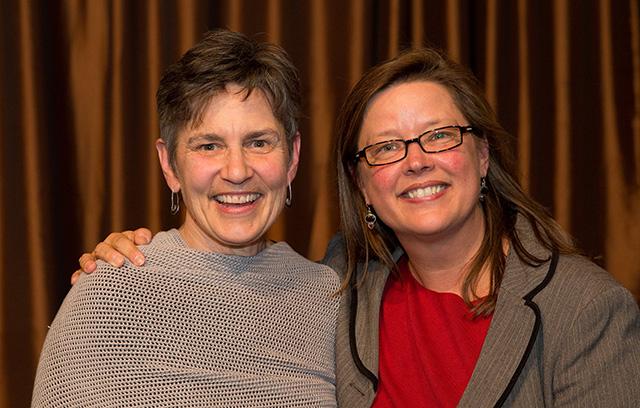 Dance became important to Justine and Justice, Green said. Seeing the positive effect the activity was having on the girls’ self-esteem, their grandmother and great aunt signed them up for more classes. The impact was significant.

“As their teacher, I’ve made them believe that they can do anything,” Green said. “There’s not a step that they can’t figure out. Even when it’s tough, they know they will get it because they believe in themselves. That wasn’t the way it was before.”

But dance can be an expensive activity, and when Justine and Justice started appearing in Art of Dance recitals and performances, the cost of classes and costumes started to add up. Green told the twins’ great aunt and grandmother about the Ann Bancroft Foundation’s “Let Me Play” grants that fund physical activities. Other girls from the studio had been Bancroft grantees, so she knew the odds were good. The family filled out an application, and each girl was awarded a grant to help pay for classes and costumes.

Physical activity for confidence and self-esteem

The foundation is excited about supporting girls at The Art of Dance, Fenlason said. Bancroft believes that physical activity helps boost girls’ confidence and self-esteem, and this studio, which caters to students of color, is the perfect place for young women to achieve their dreams of free movement and expression. Green, who was inspired to study dance at the University of Minnesota after following a friend to ballet class, is a perfect mentor for Bancroft grantees, a woman who built a career for herself out of something she loves, and wants to help other girls do the same.

“Linda is the adult version of our girls,” Fenlason said. “She is running that studio full time and literally living her dream. She takes a great deal of pride in her girls.”

Green loved ballet, but as a young African-American girl, when she looked around the studio, she saw hardly anyone else who looked like her. She felt out of place.

“I thought I’d like to have a dance studio that would include girls of color,” Green said. It was a dream that she was able to realize after many years of hard work. “I have always wanted to run my own dance studio ever since I saw Debbie Allen in ‘Fame.’ ”

Last year, Justine and Justice Webb found their own slice of fame when they starred in The Art of Dance’s production of “The Wiz.”

“Justice was Dorothy and Justine was the rainbow,” Green said. “Their family said that they couldn’t afford costumes, but they were able to be in the production because of the Ann Bancroft scholarship. The girls did a wonderful job and they had a great time. They were able to afford their dream of dancing.”

While the grant helped pay for the twins’ costumes and classes, the larger benefit was less tangible but much more important, Green said.

“Being able to spend the last few years in our studio has made a big difference in these girls’ lives. It is not just about costumes or tuition: Being able to spend time dancing and performing at recitals does so much for their confidence. My goal is that they will bring the confidence they’ve gained into the rest of their lives. Then they’ll go far. Thanks to the Ann Bancroft Foundation, they are on their way.”