Whether they’re willing to admit it or not, most Minnesotans have probably already made up their minds about the patients at Minnesota Security Hospital and St. Peter Regional Treatment Center, where courts typically choose to house people who have mental illness and are considered dangerous.

A group of local mental health advocates wants to broaden that perception, and they’re aiming to do that with works of art.

Exhibit organizers hope that viewing original artwork created by Security Hospital patients will help visitors gain a greater understanding of the artists’ lives and their struggles to recover from their mental illness.

“The idea was that the show would help change people’s minds about the patients and about their role in the community,” said Ann Rosenquist Fee, executive director of Arts Center of Saint Peter and one of the exhibit’s organizers. “It is not an art therapy program. It is an art exhibit. This show is about honoring the fact that there are artists living at Security Hospital, people with things to say. We want to showcase their work.”

It takes a village

Mounting an exhibit featuring work by St. Peter Regional Treatment Center patients was more complicated than Fee expected. She’d known for some time that there was compelling art being created at the facility, but because the campus is closed to most visitors, she hadn’t had the opportunity to view it.

“In 2014, I was tipped off that there were a lot of patients doing art at the Treatment Center,” Fee said. “I learned that there were plenty of individual artists who were making time to create their own art, spending their very meager budgets on materials and creating studio space for themselves.”

The idea of making that artwork available to the public felt intriguing to Fee. For years, she had wondered about the community of people living on the Regional Treatment Center’s nearby campus. Like all residents of St. Peter, she’d interacted with patients out on day passes in town, and she knew many people who’d worked at the facility. And she was proud of her community’s tradition of acceptance of Treatment Center’s patients, but she’d never really heard patient stories — or seen their art.

Curious, Fee made some inquiries at the Treatment Center, and eventually was connected to Kat Graves, a recreation therapist who leads hobby development groups, photography classes and an ongoing art group for patients. While Graves was excited about the idea of creating a public exhibit of her patients’ work, she’d worked at the facility long enough to know that the whole process might end up mired in red tape.

“We hadn’t done anything like this before,” Graves explained. “We didn’t know all of the avenues that we had to take to get approval for getting the art out there while still protecting the patients’ privacy.”

In the past, Graves said, she had organized small exhibits of patients’ artwork, but they had all been held on hospital grounds with a limited audience. If a large-scale show were to come together, it would have to be held off campus.

“We are private campus,” Graves said. “Visitors have to get approvals and staff has to escort them, so it just was impossible to have the show here. We figured that holding the show in a public venue would make it so much more accessible and it would build a great connection to the community.” She and Fee met, and talked about holding an exhibit at the Art Center in Spring 2016. If the plan were to get approval, Fee said, they’d also need funding to provide for extra art materials and classes for patients.

“We decided that a central part of our mission with this show was to exhibit the work of these artists and do what we could to get them materials and inspiration,” Fee said.

Graves told Fee that she would approach hospital administration about their idea, but she couldn’t guarantee that they wouldn’t run into roadblocks. She contacted Carol Olson, St. Peter Regional Treatment Center executive director of forensic services.

“I was really excited about this idea,” she recalled. “I loved that they wanted to schedule it in May, which is Mental Health Month. It also worked well for us because we are going to celebrate 150 years of being in the St. Peter community. It was a great opportunity to showcase our patients’ art — and give them respect and dignity as individuals and not just thinking in terms of their mental illness.”

Olson went up the chain of command. The response was equally enthusiastic.

“I raised the question and request up to then-commissioner Jesson and my immediate boss, Nancy Johnston,” Olson said. “They all supported it. They felt like it was a great opportunity to showcase the work of our patients and dispel myths and stigma around mental illness.” The show was approved, including a modest budget for art supplies and instruction.

St. Peter, once considered a serious contender to become Minnesota’s capital city, in 1866 instead became home to the Regional Treatment Center, then known as the Minnesota Asylum for the Insane.

“It’s a punchline, actually,” Fee said. “People say, ‘In St. Peter, instead of the State Capitol, we ended up with this institution.’ But in so many ways it has been a gift to the community.”

The gift comes in the form of jobs and commerce in this town of 11,400, but also in the form of a sense of rooted history and responsibility, Olson said.

“You can hardly meet anyone in this community who hasn’t had a relative who’s worked here. And people in St. Peter have had lots of other experiences here, too. For many years this was an open campus: The community would use the gym and the swimming pool and the showers on open nights. People from town would come out and rent space in our park for their parties. It has always been an important part of this community.” 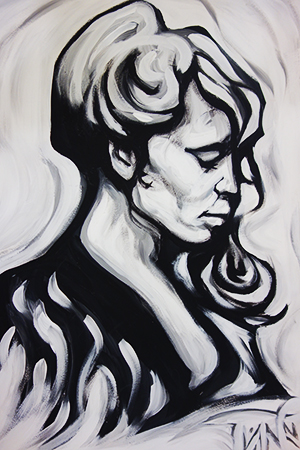 “Florence” in acrylic by Sean O.

That history has created a common sense of respect for people living with mental illness, Fee said. Patients who have earned day passes regularly come into town to shop and eat and re-learn how to interact with others. Their presence is a normal part of everyday life, and residents and business owners are generally understanding and kind.

“People who are being reintegrated into the community are a large part of life downtown,” Fee said. “Residents don’t make a big deal about it, but they try to be kind and understanding.”

Graves said her patients notice — and appreciate — that quiet acceptance.

“We use the St. Peter community on a daily basis,” she said. “We can’t always reach out and say, ‘Hello. We’re from the St. Peter State Hospital. Thank for treating us with respect. Your kindness goes a long way.’” She sees the “Changing Minds” exhibit as an opportunity for patients to express their appreciation. “This show is one way for us to reach out to the St. Peter community and say, ‘Thanks for your support. Our hospital has been in this community for 150 years. Thank you for treating us with dignity and respect.’”

Before last week’s opening, Graves and Fee made visits to local businesses, inviting owners and employees to come to opening night. There would be food and conversation, they explained, and live music by The Therapeutics, a band made up of Minnesota Security Hospital patients and staff.

“We said that the hospital wanted to thank them for being so helpful and compassionate to patients and staff,” Fee said. “Everybody we talked to had something good to say about how hard people are working to get better. They also had high kudos to the staff. When you talk to people one-on-one, it is a different picture than what the outside world would expect.”

The show, which features the work of more than 45 visual and literary artists, is exhibited in a salon style, with art filling the walls of the Arts Center’s small gallery.

“Changing Minds” opened to the public on May 13. Attendance was high on opening night, with community members, business owners, Security Hospital staff and local politicians in attendance. Almost 200 people were there.

“I heard people saying nice things like, ‘That picture just draws me in,’” Olson said. “In the art, you can see pain and expression of the sorrow that they’ve gone through while they’ve experienced mental illness. Others would say would say, ‘Look at he hope that comes out of this picture.’ It was truly seeing into the window of someone who has mental illness.”

That was just the kind of response that Fee and Graves were hoping for.

“I hope that the content represented in the work will go far to generate positive dialogue about mental illness,” Fee said.

On Monday afternoon, a private reception was held for patients at the Arts Center of Saint Peter. Patients who haven’t earned community passes were escorted to the event by staff. They were able to spend time viewing artwork and enjoying the sounds of The Therapeutics, who played at both events.

Olson attended both receptions. She said that the private patient event was, “ ‘Really fun.’  Several patients came up to me and said, ‘Carol, I want to show you my art.’ It was really cool, a great opportunity. It was wonderful to see how excited patients were to have their work on display.”

Graves said that she hoped the experience of taking part in the show would help participating patients begin to think of themselves as multifaceted artists, rather than just people with mental illness.

“I wanted them to be proud that they participated this experience,” Graves said. “I knew that the art center would be able to provide a sense of dignity by showing their work in a respectful way. I wanted their work to be taken seriously as art. That’s why we all worked so hard to create it.”

The idea of shifting perceptions for both patients and outside community members is central to the mission of “Changing Minds,” Fee said. If people are able to see beyond the label of “mentally ill,” they may be able to build healthier, more fulfilling lives for everyone.

“Some of this art was produced by people who don’t usually consider themselves artists, but they really stretched themselves to create their art,” she said. “Here in St. Peter, we’re proud that we have this group of artists as our neighbors. We are proud to be able to make this exhibit happen and for the community to be able to experience these people as artists rather than just as patients. We’d also be proud if through their participation in this exhibit, patients begin to see themselves in a different way, too.”