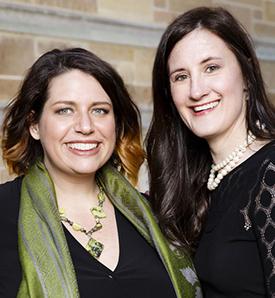 When she became a college professor, J. Roxanne Prichard saw that most of her students had one characteristic in common.

“I noticed right away how tired they all were,” Prichard said. “I also realized how little they were aware that they were tired — and how much that fatigue was negatively impacting their life.”

Sleep deprivation was a drain on her students’ physical health and academic readiness, Prichard recalled: “They were constantly yawning and falling asleep in class,” but it also had a negative impact on their mental health. “I saw how quickly students got overwhelmed by academic stress,” she said. “They’d come to meet with me during my office hours, and they would cry over really small issues.”

These observations inspired Prichard, associate professor of neuroscience and psychology at the University of St. Thomas, to further investigate the state of youth sleep in America. She’d already studied sleeping behavior in humans and rats for her doctoral research at the University of Wisconsin-Madison, so this new area of focus made sense.

Prichard’s youth sleep research has garnered attention — her paper, “What is the cost of poor sleep for college students? Calculating the contribution to academic failures using a large national sample,” conducted with St. Thomas economics professor Monica Hartmann, was presented in 2014 at SLEEP, the annual gathering of the Sleep Research Society and the American Academy of Sleep Medicine.

A previous study on the impact of disrupted sleep on college students, published in the “Journal of Adolescent Health,” has been cited in hundreds of articles and garnered her the notice of “Huffington Post” founder and sleep evangelist Arianna Huffington, who mentioned Prichard’s work when she announced her national “Sleep Revolution” college tour. (When the tour made a stop last week at the University of Minnesota, Prichard and her colleague, Birdie Cunningham, associate director for health and wellness at the University St. Thomas, were featured speakers.) This June, Cunningham and Prichard will be presenting at the American College Health Association annual meeting in June in San Francisco. Their topic is  “Sleep disturbances in mental illness and sleep practices for mental wellness.”

The shaky state of youth sleep

The overprogrammed schedule of the typical teen, combined with early high-school start times that run counter to the developmental needs of the teenage brain, make it nearly impossible for an adolescent to get all the sleep they need, Prichard said.

“Society is failing teens. We have a whole generation who do not know what it feels like to get enough sleep. Teens need eight to 10 hours of sleep a night. They’re not getting that. I’m not surprised we are seeing rising rates of depression and anxiety alongside their decreasing sleep.”

Another source of teens’ poor sleeping habits, Prichard said, is the fact that many live “highly lit” lives, with bedrooms stocked with computers, cellphones and televisions. A glowing screen disturbs sleep, no matter what its size.

Prichard’s doctoral work focused on the impact of light pollution on the developing rat brain. She found that sleeping in an overlit environment reduces sleep quality and increases stress levels.

“The eyes connect to the brain in 13 different places and only one of those places has a direct impact on what we actually see,” she explained. “The other areas are all an unconscious response to light, including hormonal changes and sleep changes.”

A space for the study of ZZZs

In response to what they see as a sleep crisis among young people, this year Prichard and Cunningham launched the Center for College Sleep, a first-of-its kind center that combines academic research and programming know-how to promote sleep research and the creation of interactive programs designed to evaluate and improve sleep practices in college and university settings. Cunningham is the center’s director of operations and programming, and Prichard is scientific director.

As one of its first projects, the Center for College Sleep created an interactive “environmental scan” that helps help college administrators check to see if their institution is fostering a healthy sleep environment.

“The scan asks at least 80 questions that a college administrator can answer,” Prichard said. “It helps them take a careful look at the messaging they are giving about sleep.” The scan helps administrators — who also come with their own biases about the importance of sleep — learn to look at getting a good night’s rest from a different perspective. This can also be a revelation for students:  “We think that a lot of times students might be coming into campus health centers with symptoms of depression and anxiety and these symptoms may actually be sleep deprivation manifesting itself,” Prichard said. “If they get enough sleep they may realize that they might not need an antidepressant.”

Prichard and Cunningham’s research has already helped to increase awareness on campus about the importance of not skimping on sleep.

“We’ve been sponsoring programming and different conversations around campus,” Cunningham said. An annual student health survey discovered that one of students’ biggest stressors was sleep, and that finding helped inspire administrators to fund their center.

One thing research discovered was that the most extreme sleep deprivation usually occurs in a student’s first few years on campus. “The students who are getting the best sleep are the seniors,” Cunningham said. “They know it’s not worth it to cheat on their sleep. They know the benefits and how important it is, especially if they’ve lived through those freshman years of shortchanging themselves.”

Many Americans see getting enough sleep as a luxury they cannot afford. Prichard and Cunningham aim to change that perspective by pointing out that getting eight hours in bed at night is more than just “beauty rest” — it’s a social-justice issue.

Prichard sees this perspective played out in her own students.

“Often the students struggling the most with sleep were the ones coming from the poorest backgrounds,” Prichard said. Lack of sleep “disproportionately impacts the ones with fewer resources, the ones who are working around-the-clock jobs to offset their income and loan costs.” College students with means don’t have to find work outside of school and therefore have more time to rest. The same imbalance works in high schools, too, Prichard said: “Wealthier high schools were the first ones to move their start times to after 9 ‘o clock. Students with parents less educated about health issues tend to live in districts where the start times can be as early as 7:30 or 8 a.m.,” Prichard said.

“I was seeing it almost as a social justice issue in that often the students struggling the most with sleep were the ones coming from the poorest backgrounds,” Prichard said. Lack of sleep “disproportionately impacts the ones with fewer resources.”

Cunningham said that reframing the issue of sleep depravation as a public health and social justice issue helps bring more people into the discussion. When decision-makers see sleep as an issue of fairness rather than one of luxury, they are far more likely to respond.

“We want to reframe the message that the university sends about sleep,” she said. “We want to make it a sleep-friendly place.”

Changing attitudes about sleep in college takes work. Many people’s memories of their college years are shaded in part by a haze of late nights and hazy, coffee-fueled mornings.

The first step is educating colleges — and college students — about the basics of sleep hygiene, Prichard said.  “It can be really basic. Say if a student has to go to the bathroom in the middle of the night, most have to stumble out of their beds and walk down a hallway lit with bright fluorescent lights. Colleges can easily make a change there. And we know that the best temperature for sleep is at 65 degrees or below. A lot of dorm rooms are really hot. And there are other important questions like, ‘Do you sell energy drinks on campus?’  ‘Is your library open 24 hours?”

And what about the tradition of students pulling “all nighters” to finish a big paper?

“Who says that has to be a tradition?” Prichard said. “Where did that come from? That’s a toxic message; when you look at he students who do the best in school there’s no way they are actually pulling all nighters. We have evidence to support that.”

To further support sleep health on campus, the Center for College Sleep has also stockpiled supplies that can help students get the rest they need, Cunningham said.“We give students eye masks or ear plugs,” she said.

They also tell students about sleep-health apps that can help them use their smartphones to chart their sleep habits. And, Prichard added, staff members at the Center for College Sleep can also provide help in creating a safe space for sleep. “We can also teach students helpful ways to have a dialogue with a roommate about respecting quiet hours,” she said.

“We need to work on the social norming of sleep. It is possible for a college student to get a decent night’s sleep, have a social life and get good grades.”