The fight against prostate cancer created a tangled-up ball of anxiety and pain wedged so deep in Jim Cline’s body that he could hardly remember his life without it. He hurt all over, he had trouble sleeping, and he constantly ruminated about his future. Then, one day, Kathy Mitsch-Wood, an occupational therapist from Fairview Home Care and Hospice, suggested Cline try treating his symptoms by inhaling a fragrant combination of lavender, bergamot, geranium, vetiver and jojoba/vitamin E.

Cline, 72, a retired phone company worker from Moundsview, was skeptical, to say the least.

“I thought, ‘How can smell do anything?’ ” He said with a snort. “When Kathy first mentioned this idea to me I said, “Yeah, right. I heard this one before.”

But Mitsch-Wood persisted. Cline remembered that his daughter-in-law had used essential oils to help his grandchildren ease their aches and pains after a long day of Irish dance competition, and he decided to give aromatherapy a try.

“I thought, ‘What the hey? Give it a shot,’” he recalled. “Once you get to certain point, you have nothing to lose. I didn’t think I had all that much anxiety, but once I started getting into this stuff, I realized that my anxiety was actually a lot higher than I thought it was. After a few weeks of this therapy, everything just kind of lifted and I became more peaceful and relaxed. I was surprised how much it helped.”

Part of the care plan

Staff from Fairview Home Care and Hospice has been offering aromatherapy treatments to patients for three years, said Sandra McGurran, MSW LISW, care management and integrative healing therapies coordinator. Aromatherapy, which is not intended as a replacement for physician-ordered treatment, is considered integrative, or complementary, to traditional medical treatment.

“We always work within the physician’s plan of care,” McGurran said.

Aromatherapy has been found to be effective in lessening common symptoms of cancer treatment, including nausea, anxiety, muscle pain and sleeplessness, McGurran said.

“When we visit a patient, we talk about symptoms that are very normal to have during treatment. We talk about care options. One of them is aromatherapy.”

Fairview worked with Patricia Ronning of Healing Alchemy, to create custom blends designed to reduce nausea and vomiting, ease stress, anxiety, and muscle pain, and enhance relaxation and sleep. The essential oils are made available to Fairview staff — and now, starting in June, to patients through Fairview pharmacies.

“When we visit patients, we say, ‘Would you be interested in trying this?’ ” McGurran said. “Most patients are dealing with symptoms and diagnoses that lend themselves to anxiety and pain. So people often say, ‘Yes.’ Even though there might be some skepticism, they’re open to it.”

Once patients get past their skepticism, McGurran said, “Many really like this experience. Patients who experience fear or anxiety or can’t sleep, they can use this all day. They can manage this themselves.”

And, McGurran added, when you dig a little deeper, you discover that many patients are already using herbs and essential oils in their daily life. So it isn’t such a stretch to try aromatherapy treatments.

“When I stared asking people, ‘How are you managing your symptoms?’ many would tell me, ‘I have some lavender in the cupboard.’ Or ‘I’m drinking chamomile tea.’ So when you take time to really talk about it, you realize this kind of approach is actually familiar to a lot of people.”

For Cline, the connection between his anxiety and his pain became apparent as the scents from the aromatherapy helped him relax. He explained that his anxiety came from a heightened awareness of the unknown: “I don’t know what is going to happen down the road.”

McGurran explained that Cline’s anxiety, which was completely appropriate to his situation, may have been tightening his muscles, increasing his heart rate, constricting his breathing, pulling his body inward and increasing his pain.

“What do we do when we’re in pain? We clench and tighten up,” she said. “It’s the same with anxiety. So when we can offer somebody some guided breath work, we begin to see people relax. When we offer aromatherapy, we begin to see a decrease in the pain because people begin to relax. They exhale.” 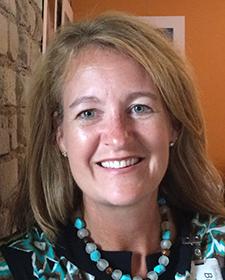 As Cline’s body relaxed, his pain decreased. Mitsch-Wood showed him how to step away from his daily life and breathe in the essential oils, taking his mind away from his worries and traveling to beautiful places that are significant in his life.

He does this several times a day.

It took three weeks of daily treatments, but Cline said that aromatherapy has reduced his anxiety and pain so much that he has been able to step away from pain medications.

“It really did take away the anxiety of the cancer,” Cline said. “And I have no pain. By relaxing and getting rid of the anxiety, I have gotten rid of the pain. For the last three weeks I haven’t had to use any pain medications.”

Cline’s experience, while remarkable, isn’t uncommon, McGurran said. Though achieving a complete absence of pain is unique, many patients report a reduction in symptoms after using aromatherapy blends.

“The general response to this treatment has been positive,” McGurran said.

For a guy who started out a skeptic, Cline is a convert.

He now breathes in the essential oils whenever he feels the familiar emotions building up inside his body.

“Whenever I feel like I’m getting tense or I start feeling sorry for myself, I will do the aromatherapy,” he said. “I’ll say, ‘I’m gonna go somewhere. I‘ll be back pretty soon. I don’t know how long I’m gone, but when I get back, I feel so much better.”

This approach has worked for Cline — and it’s helped him build a new understanding of the interconnected way the human body works.

Cline is not in hospice care, and he’s hoping to turn his cancer into a chronic condition. “I will never be cancer free,” he said, “but I should be able to live a long life with the treatments we’re doing now.”

Because he’s not the kind of person who likes to share his private life with the world, Cline at first said he’d rather not tell his story to a reporter.  But he changed his mind.

“My wife and I talked it over,” he said. “And I thought, ‘If can help just one person get over the anxiety and pain like I did, it’s worth it.’ ”

Breathe in, breathe out: Patients find that aromatherapy helps reduce anxiety and pain