This spring, since the State of Minnesota began publicizing its new Adult Abuse Reporting Center, a 24-hour statewide toll-free hot line where Minnesotans can report cases of suspected maltreatment of vulnerable adults, the number of reports has increased significantly. Before the change, adult abuse reports were handled through a network of more than 169 individual lines across the state. Now all reports go through one number: 1-844-880-1574.

“Last year,” said Minnesota Department of Human Services Commissioner Emily Johnson Piper, “more than 40,000 cases of adult maltreatment were reported in the state. That includes neglect, self-neglect and neglect by a caregiver. Since we rolled out promotion of our statewide hot line this spring, we are seeing a real uptick. In January, we saw a total of 3,963 reports. In May we had 5,593.”

Piper credits the increase in reports to the new hot line. The department has promoted it minimally this spring, she said, and officials at individual counties were alerted to the official change last summer.

“I think the increase in the numbers is directly attributable to this hot line,” Piper said. “We’re also seeing an increased awareness in the community around elderly and vulnerable adult abuse reporting.”

The number of reports is higher than DHS officials anticipated, explained Jennifer Kirchen, DHS adult protection supervisor. When organizers began the process of consolidating all reporting lines into one hot line number, they expected some increase in adult-abuse reports, she said, but the jump over the last few months was bigger than expected.

A vulnerable adult is any person over the age of 18 who is dependent on another person for the majority of his or her care. A vulnerable adult may live in a care facility. Another kind of vulnerable adult is one who lives on his or her own but whose infirmity limits the person’s ability to protect him/herself from harm and meet basic needs. Adults with disabilities and older adults often fall into these descriptions.

“Some signs over time include the vulnerable adult losing weight,” Piper said. “Do they look malnourished? Do they have poor hygiene? Do they seem depressed? Do they seem more isolated than they have in the past? Those are signs that something in the adult’s life is not right. Those cases may warrant a report to the Minnesota Adult Abuse Reporting Center so that professionals — including law enforcement, county human services, or DHS — can come in and make sure that that person is being well cared for.”

Other signs may be even less overt, Kirchen said: “Maybe the vulnerable adult is withdrawing from activities. Maybe they aren’t as social as they used to be. Maybe they look to a caregiver to speak instead of speaking for themselves.”

The people who most often see these signs are those who commonly spend time with vulnerable adults outside of their home environment.

The state’s goal is to make sure that all Minnesotans, no matter their age or ability, are able to live lives free of abuse or neglect, Piper said. In cases of reported abuse, the vulnerable adult’s opinion about how they wish to live is given first consideration.

“Our goal is to make sure that we are being person-centered in our approach as a state to how they want to live their lives,” Piper said. “The adult should be engaged in conversations about how their lives should change. They should have a voice in where they go and how they are cared for at all times.”

This summer, DHS launched a public awareness campaign, “The Power of Could,” [PDF]  publicizing the hot line and describing signs of possible maltreatment of vulnerable adults.

“Going forward we will have materials that include a DVD, a brochure, radio ads, social media ads,” Kirchen said. “We’ll also have a big push at the State Fair.”

The educational aspect of the campaign is important, Kirchen added: “We are going to drill down on the types of abuse. There will be information on emotional abuse, though that’s not what we see the most of. What we see most of is self-neglect, or someone who isn’t able to take care of themselves. They live in a garbage house. They may not be able to toilet themselves anymore.”

People who see signs of self-neglect in a vulnerable adult can also call the hot line.

Mandatory reporters, or individuals like nursing staff or educators who are required by law to report cases of abuse or neglect, can also now use a consolidated web form to report cases of suspected vulnerable adult abuse, Kirchen added: “We’ve seen about 12,000 web reports in the last 11 months.” 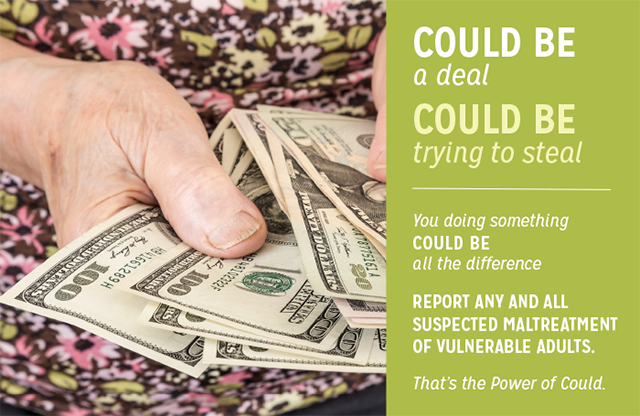 Minnesota Department of Human Services
Another image from the statewide public-awareness campaign, “The Power of Could.”

Piper said she hopes that this new system will help law enforcement and state and county protective services get ahead of the game in cases of suspected vulnerable adult abuse.

“It’s my hope that engaging the public and having this public-awareness campaign will be the first step in being more proactive to stop abuse and neglect before it happens,” she said. Piper is aware that the campaign will likely garner an even bigger increase in reports, but she’s confident that recent funding increases provided by the State Legislature will help fill the gaps.

“We do think that there is going to be an increased need for additional services to best protect vulnerable adults and respond to the reports,” she said. “One of the challenges that we have with this new campaign will be identifying how much this has been a problem over time or is it a growing problem. Are the numbers growing because it there is an increased awareness or is it because it is an increasing problem? How do we identify the causes of the increase and come up with ways to stop the problem from growing? I don’t think we have the answer to any of those questions yet, but we’re working on figuring them out.”