It may feel counterintuitive, but because she is a naturally optimistic person, Karina Quevedo, assistant professor of psychiatry at the University of Minnesota, has chosen to focus her research on depressed adolescents.

“I feel like adolescence is a time of life that has so much hope,” she said. “I think that this is where we can make a real difference.”

A 2008 graduate of the university’s Institute of Child Development, Quevedo is leading a study that teaches participants to use memories of positive life events to activate areas of the brain that respond to those recollections. After working with researchers to conjure core happy memories, participants enter an MRI scanner where they are able, in real time, to see how recalling those memories can activate targeted areas of the brain, which can create lasting feelings of happiness.

Quevedo cautioned that the techniques she and her colleagues are employing are still in the experimental stages. Study participants — who were found through a number of channels, including signs put up in Twin Cities coffee shops — are informed that the research is still in the very early stages.

“The technique is so new, the technology is so cutting edge, that we don’t know if it is going to work or not,” Quevedo said. “There are only a few places in the country where this is being done.”

Last week, Quevedo, who is in the thick of her research, made time to tell me more about her study. She promised to get back in touch when she has results to report.

MinnPost: How did you get interested in the idea of scanning people’s brains to help them learn to fight depression?

This interest started when I was growing up in Cuba. I came to the U.S. at age 27, but I came of age in Cuba during the early 1990s, which were tough times for young people there. It was called the Special Period, and it was a dark time in Cuban history. In order to cope with what was going on in our country, many of us have discovered the power of humor, of meditation, of finding the silver lining wherever it is.

As a young person in Cuba, I practiced meditation and yoga with a group of my friends. Early on, meditation became an important tool for happiness and occasionally for savoring positive experiences. I was part of a bunch of young people between the ages of 18 and 22. We began to meditate, working our brains in the same way that we would work our bodies in a gym.

MP: So you and your friends were trying to build brain strength to withstand hard times?

KQ: Yes. I have always been interested in how we train our brain. The leap from doing that with my friends to teaching and trying to teach kids to do this was always a long-term goal for me. It took a while for me to get to this point. I graduated from the university in 2008. Here we are in 2016. Now I am finally starting to collect data.

MP: Can you tell me more about why it took so long to move your research from concept to reality? 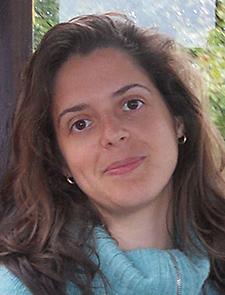 KQ: One of the problems we have in clinical neuroscience is there is a huge gap between bench research and clinical practice. It takes many years before you can actually apply something that you suspect strongly will work, either from personal experience or from a long-term tradition like contemplative practice.

What I wanted to do was to shorten that period of time between bench research and clinical application. My idea was, “Can we get kids in the scanner for even just a half hour so they can experience a practical way they can use their brains to change how they feel?” Feelings are notoriously difficult to change. They are not under conscious control. Our animal brain did not evolve emotions to be controlled consciously but rather to react to immediate stimuli. We are not primed to control our feelings that way. But we want to teach kids how to do that.

MP: Why do you want to focus on depressed adolescents?

KQ: Human beings have a set of tools that we use, usually unconsciously, to change the way we feel. Either listening to music, talking to friends, exercising. The problem with depressed adolescents is that they seem to have fewer of those strategies, and the strategies that they are using don’t seem to work. Adolescents become depressed because of a confluence of past experiences and changes that are typical of this adolescent period.

When you are having a hard time in school, when you are being bullied or your family is under stress, depression becomes more severe. For a depressed adolescent, suicidal thoughts can be a seductively perverse exit. Why do you want to be alive when you are only looking at one side of the picture? You only pay attention to what is pessimistic. You expect life is never going to get better. Kids with depression have these very dark sunglasses on that don’t allow in any light.

Our work provides alternative, contradictory evidence that depressed adolescents can actually make physical changes in their brains. My theory is that when an adolescent can see that the evidence of real brain changes is visible in the scanner, they can develop a feeling of mastery over their emotions. They can see how they have the power to change their own mood.

MP: How do the scans work?

KQ: We’re targeting the areas in the brain that are known to be the repository for emotionally charged memory. Those areas are the amygdala and the hippocampus.  When you give an individual the opportunity to revisit their past and find those moments of light, of happy memory, it activates those areas of the brain.

We schedule participants to come in one hour before the time of their scan. We sit together in a private room and come up with five to seven happy memories. They can be anything positive and intense and relatively short.

KQ: Yes. We call it neurofeedback. We don’t feel our brain the same way that you feel your muscles in the gym. We don’t have that external feedback about our own internal processes. We’ve never trained ourselves to be sensitive to those changes. We’re not a very introspective culture. But introspection does develop with age. It is not something that people are training spontaneously. As you age, you become self-aware, you become reflective of our own emotions. The scan is a physical image that shows changes that are going on inside of our brain.

MP: Do your young subjects have a hard time wrapping their minds around the concept of this research?

KQ: Many kids have an understanding of the idea of core memories from the movie “Inside Out.” I ask kids in my study to tell me about happy core memories and then recall those memories while they are in the scanner. Recalling the positive memories can allow kids to move the gauge to green. Later, I ask participants to think about what was the memory that they were feeling in the scanner that allowed them to move into the green light.

MP: How is this approach different from the way most young people are treated for depression?

KQ: This is something that we are not doing in therapy very often right now. Right now most therapy is very cognitive in its approach. 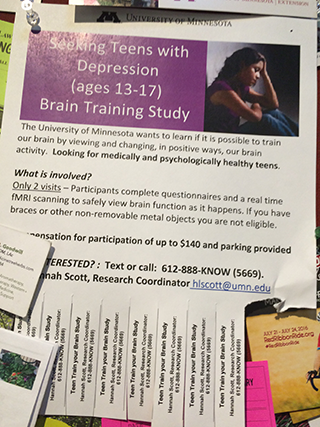 MinnPost photo by Andy Steiner
Participants for Quevedo’s study are being recruited through
notices like these posted in Twin Cities coffee shops.

If emotions are a fire, you need firefighters to calm them down. Cognitive behavioral therapy accesses emotions indirectly via thoughts and cognition. Sometimes you can flood an area with soothing water or a memory of a happy event that will counteract the unhappy emotions. This is a way in which hope may come through. This approach is still highly experimental.

MP: What has been the response so far?

KQ: Depressed kids are having a harder time than the healthy kids in our study in figuring out how to do this. It is not a surprise. But there are some core memories in their emotional circuitry that we are trying to target, and we have had some success.

MP: Why focus on adolescents?

KQ: Adolescence is actually a period of opportunity because the brain is malleable at that age. At a younger age, people may be better able to learn how to harness their positive memories for brain health.

MP: Like how younger people are better at learning languages than older people?

KQ: Yes. It’s also a period when they are forming their identity. It is important that they are able to view themselves as happy people, not hopeless individuals.

MP: What are the ethical limitations to conducting a study using teen participants?

KQ: You always have to be careful with younger participants. We don’t change their medication. We don’t provide medication. We don’t do anything to change the treatment they are already receiving. We make it clear that our research is experimental. They are just doing something with their minds. They happen to be inside of a scanner when they are doing that.

There are some things that exclude a kid from participating. One of the things we screen for is claustrophobia. If you are going to be having difficulty with tight spaces this is not a good study for you. You also cannot have braces. You cannot have any metal in your body. IUDs or permanent retainers are OK.

If a participant becomes distressed at any time during the scan, we help them calm down, and then we take them out.

MP: What kind of responses are you getting from adolescents who have participated in your study so far? What sort of joyful memories have they used to trigger brain activity?

This is all anecdotal, of course. But as he was skipping away, he looked at me and said, “I would love to do this again.”

Another participant remembered seeing the sea for the first time in her life. She was with her family. She remembered that they were all hugging and smiling and just staring at the sea. When she came out of the scanner, she was smiling and happy.