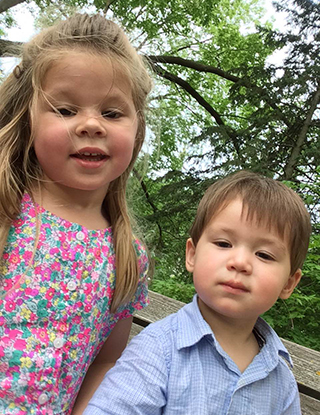 Courtesy of Amelia Toleu
Mabel and Francis Toleu are taking part in the SPARK study.

When her daughter Mabel was still an infant, Amelia Toleu noticed that she wasn’t developing in the same way as other children.

Some parents might think that a baby that behaved in that manner was just a late bloomer. But Toleu saw something different.

“She didn’t respond to other people or seem interested in them,” she said of her daughter. “She was in her own little bubble.” Toleu wondered if Mabel’s behaviors were early indicators of a larger disorder: “When she was about 10 months old I remember Googling, ‘Symptoms of autism in babies.’”

By the time Mabel was 15 months old, she spoke no words.

“She was nonverbal,” Toleu recalled. “She didn’t have any sort of communication with us. You know how some kids will say, ‘Mama-Dada’ at that age? Mabel just didn’t.”

Toleu was concerned enough about her daughter’s development that she asked her pediatrician if she could test her for autism.

“She brushed off our concerns and said, ‘Kids develop at their own pace. We’ll wait and see,’ ” Toleu recalled. Most physicians won’t make an autism diagnosis until age 2 at earliest, Toleu knew, but she had heard that early intervention is key to success later in life, so she decided to take matters into her own hands.

Toleu got Mabel signed up for a series of developmental screenings through a state of Minnesota program called Help Me Grow. The screenings pointed the family to a range of special services, including speech therapy, and, eventually, a screening for autism. Mabel was diagnosed with the disorder at 23 months.

Mabel’s diagnosis opened doors for the intensive behavioral therapy that Toleu credits with her daughter’s ability to keep up with her peers.

“Having the diagnosis has given us access to resources that have helped our daughter just flourish,” she said. Mabel, 4, now attends preschool with neurotypical children. “She is able to interact with other children in the classroom. She is able to function. She is talkative. She is sweet. I told her teacher last year that Mabel was nonverbal when she was 2 and she did not believe me. Her vocabulary is through the roof. Early intervention was the key to her success.”

‘I’m a big fan of research’

Because Toleu believes that her daughter’s early autism diagnosis has helped her get the help she needs to thrive, and because she wants other children to have the same advantages, she signed her family up to take part in SPARK, a national research study with a goal of enlisting some 50,000 people with autism and their families.

The goal of SPARK is to collect and analyze data about people with autism to advance understanding and research. Subjects and their close family members provide DNA samples so that researchers can pinpoint genetic causes of the disorder. In Minnesota, the study is led by Suma Jacob, M.D., Ph.D., associate professor of psychiatry and pediatrics at the University of Minnesota.

The study’s large size is designed to help researchers build a strong foundation on which to base comparisons and conclusions about the autism diagnosis and treatment, Jacob said. The hope is that as more is learned about the genes connected to autism, scientists will be able to develop tests that will make it easier to diagnose the disorder at an early age.

Early diagnosis will help children like Mabel and their siblings get the treatment they need. 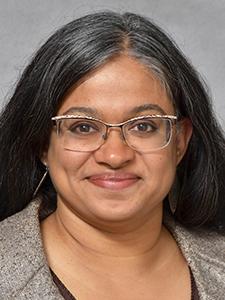 “There have been studies that have shown that there are strong heritable components in autism,” Jacob said. “We now know that there are over 100 genes that contribute to autism. It’s a complex genetic disorder. There are some disorders, like fragile X syndrome, that we know are defined by a single gene. Autism is much more complex. What’s exciting about this study is we know that we need to gather a large number of families with autism to find as many potential connections as possible. We are in the process of collecting that large sample.”

Because her family is enrolled in the SPARK study, Toleu has been able to make sure that Mabel’s younger brother Francis, 2, will also benefit from early observation and testing for autism. So far his doctor does not think he on in the autism spectrum.

“It’s unusual to have a boy that is not affected and a girl that is affected in the same family,” Toleu explained, “so we had Francis checked every six months or so for symptoms of autism. At his two-year appointment, they pretty much gave us the all clear.”

Toleu said she is happy that her children have been able to indirectly benefit from the SPARK research — but she is not in it for her family’s sake alone.

The struggle to secure Mabel’s diagnosis and treatment inspired Toleu, a stay-at-home mother, to want to help other parents who may not have access to as many resources as she does.

“I’m in favor of regular earlier screening for autism and earlier intervention for everyone because actually getting an autism diagnosis is a nightmare,” she said. “There are so many folks that don’t know how to access these resources, don’t know how to navigate through them. The wait list for treatment and testing is ridiculous. If an autism diagnosis were simply a matter of a routine DNA test or a saliva sample at birth or at the first well-child visit, it could help so many people.”

A test like this is still years away, Jacobs said, but Toleu believes that studies like SPARK are an important first step toward making that knowledge available to all parents.

“If they could eliminate the need for people to have to wait years for a diagnosis, if they could help people not lose precious time getting their child the tools they need to learn and grow,” Toleu said, “it would well be worth it.”

The SPARK study is still building momentum, Jacob said, but response from the sate’s autism community has so far been enthusiastic and supportive.

“Our goal is to reach thousands of families in Minnesota,” Jacob said. “We are slowly building the pool.” Since Jacob came to Minnesota four years ago, the university’s autism center has grown. It is now part of a nationwide network of autism research programs all working to decode the genome for the disorder.

“Because we need such large numbers of families for this study,” Jacob said, “we understand that one individual center or region can’t do alone. We are connected with 20 centers across the country. We are trying to get a large number of families involved, so that we can look at the many different genetic factors contributing to autism.”

A genetic test for autism would be a good tool for families, Jacob believes. Early identification and treatment can only be beneficial for everyone. The more you know about a disorder the more you can understand how to treat it and help those it impacts.

“I think it helps families to know about their genetic risks,” Jacob said. “That is a first step in figuring out factors that contribute to the disorder. With some known genes you can start developing treatments that build strengths around the pathways in the brain that are affected. It always helps to give more information to families. That opens up new treatment options that could help their children live fuller lives.”

Mabel Toleu is leading a full life, her mother said. But if it weren’t for early intervention, she doesn’t know what her prognosis would have looked like.

“She is having wonderful experiences,” Toleu said. “She is growing. She is learning. Early intervention has given her the tools she is going to need to be a successful adult. I think that is the foundation of childhood  — learning how to be successful in her own right. I don’t have any doubt now that she will be able to live on her own, work and be a contributing adult. That was not always so clear early on.”

Jacob said that it is important to emphasize that, just like its genetic profile, autism manifests itself in a complex range of behaviors. A person cannot make generalizations about the disorder or its impact.

While it is hard to gauge how each child with autism will develop, Jacob does believe that early intervention is key to long-term success.

“As a clinician who works with families, I always say, ‘Every child has strengths and weaknesses.’ ” Jacob said. Identifying — and understanding — the disorder as early as possible will help families build on the strengths.

Toleu agrees. While she understands that Mabel “will never come off the spectrum,” she believes that early intervention has helped her be able to learn to the best of her ability. She is proud of her daughter’s accomplishments and excited for the life she will lead.

“I’m not trying to change who my daughter is,” Toleu said, “but unfortunately the world does not change for one person. I’m hoping that she will learn to function in a world where most people are neurotypical. If she can learn to navigate in that world then we have done our job. And I want that for all children.”