Rev. Nancy Nord Bence is passionate about reducing gun violence. So passionate that this February she left her role as pastor of the 2,000-member Peace Lutheran Church in Coon Rapids to become executive director of Protect Minnesota, an independent statewide organization that advocates for stronger gun laws and educates people about gun violence.

So when she felt a call to take on a job that had the potential to improve the lives of all Minnesotans, Bence moved to Protect Minnesota, stepping into the role formerly filled by longtime executive director Heather Martens.

“When I left the parish,” Bence said, “I thought I was getting into a less-busy job. But instead I just got into a lower-paying job that was even busier. Somehow, though, the move feels right. There’s so much good that can be done here.”

Although Protect Minnesota has been combating gun suicide for 25 years, they have recently begun developing new programs in this area. When I called Bence last week to learn more about her organization’s stance on this issue, she explained that 82 percent of gun deaths in Minnesota are suicide.

“There is not an aspect in our lives as Americans that is not touched and wounded by gun violence,” Bence told me. “We are all, in one way or another, survivors of gun violence.”

MinnPost: Protect Minnesota is a statewide gun violence prevention organization. Why are you also focusing on suicide prevention?

Nancy Nord Bence: Just this past week, we found out that suicide deaths in Minnesota are up this year by 6 percent. The largest rise in suicides was among men ages 25-34. Firearms continue to be the highest means of suicide in that age group. Eighty-two percent of gun deaths in Minnesota are suicide, which is a higher percentage than in other states.

MP: Why do you think suicide by gun is more common in Minnesota than it is in other states?

NNB: I think it has something do to with the availability of guns here. We have higher rates of suicide in suburban and rural areas and that’s where there are a lot of hunters. Rates of gun ownership are higher there.

MP: You left the ministry to take on this role. What makes you so passionate about this issue?

NNB: I am an ordained ELCA pastor. In my 18 years in the parish, I led two suburban white parishes, St. James in Crystal, and then Peace Lutheran in Coon Rapids. I also spent time as a hospital chaplain. During my time in the parish, I presided over six gun-violence deaths. Five of those deaths were suicide.

At my white suburban churches I dealt with that much gun violence. And I think that is not particularly unusual: All over America, any parish pastor that has been doing this job for almost two decades will have this same issue with gun violence.

If you are a pastor, supporting a family that is facing that kind of awful tragedy, you get a terrible firsthand view of heartache. It is impossible to forget. Families are torn apart by gun violence. It is a very different kind of pain when someone dies of cancer. Those types of death are also tragic, but they are a natural part of the human condition. When someone dies by gun suicide, part of the family also dies.

I believe that many suicides by gun could be preventable if we could just get lawmakers to ignore the NRA and change laws.

NNB: We know that suicide is an impulsive act. Every step you can put between the moment when someone wants to kill themselves and when they can get their hands on a loaded gun, a suicide is less likely to happen.

We need to make suicide more difficult. Walking across a room, opening a safe, getting ammo, loading the gun, these are all steps along the way when a person can change their minds. And what if they have to go purchase a gun before a suicide? Even just having to go to Cabela’s and get a background check — that would force a person to interact with a licensed dealer, and slow them down.

The gun lobby does not support universal background checks. They can say that white gun owners are hunters and they support the Second Amendment, that gun violence is an inner-city problem. This is a terrible lie. In reality, white people own much of the gun violence problem in this state because of suicide.

MP: Are there other methods of making gun purchases safer?

NNB: The state of New Hampshire has a wonderful program that we are hoping to recreate in Minnesota. In New Hampshire, public health groups have worked with licensed gun dealers to educate them about what to look for when they interact with a customer who says they, “only need one bullet,” or, “I need a gun right now.”  They have information on the counters in gun shops.

They found that licensed dealers are open to being part of the solution. They don’t want the gun they sell to be used to blow off some kid’s head.

MP: But I thought that in most gun suicides, the firearm that was used was already in the home.

MP: Does this count for homes with hunting rifles? 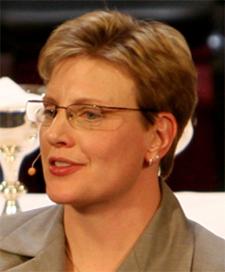 They’ve been told, “Some scary other owner is going to harm your family.” If I think my gun is going to keep me safe, then I can’t store it unloaded and locked. It has to be loaded in the bedside table. It has to be in the living room cabinet. That’s when suicides are happening.

MP: Sounds like you’re getting back to the idea that many suicides are an impulsive act that cannot be avoided.

NNB: Not unless a gun is stored locked and unloaded. Easy access allows the 20-year-old young man to grab a loaded gun and use it on the worst day of his life.

So many pastors spend time with families that have lost members to gun suicide. The vast majority of times the gun that was used for the suicide belongs to a relative. The pain of the person who owned the gun and didn’t have it stored locked and unloaded is something they never get over.

MP: So again, you’re saying reducing gun suicide is as easy as limiting the access to guns in a house, making it harder to just pick one up and shoot.

NNB: Yes. There’s no going back with a gun. According to the study I mentioned earlier, suicide attempts by a gun are 42 times more effective than any other means of suicide.

Nine times out of 10, if someone survives a suicide attempt they will never attempt suicide again. The gun lobby says, “If they don’t have a gun, they’ll just try kill themselves another way.” That is not statistically true.

MP: So far, we’ve been talking about suicide by firearms in suburban and rural communities. Does limiting access to guns reduce gun violence in urban areas?

NNB:  Our whole state is victimized by gun violence, not just one little part of the urban core. The same good, common-sense legislation that would help in the urban core to lower homicide rate would also prevent suicide in rural and suburban Minnesota.

MP: What communities are most impacted by this form of suicide?

NNB: Suicide deaths by gun are an overwhelmingly white phenomenon. From 2008-2010, there were about 800 white Minnesotans killed by suicide by gun compared to just 17 black Minnesotans. But the NRA still tells us that gun violence is a black problem.

This doesn’t mean that we don’t care about the terrible violence going on in north Minneapolis and other communities of disparity in our state. But even as we talk about this we cannot give our lawmakers an out by not talking about suicide by gun.

We can’t forget that the highest rate of suicide in Minnesota is actually among American Indian young men. That’s largely a rural population with easy access to guns.

MP: I grew up in a rural area. My father was a hunter who stored his unloaded rifles in a cabinet. What is your experience with hunting culture?

NNB: I was a city kid and a suburban kid. My own family never had a hunting tradition. But after serving a congregation in Coon Rapids, I have many, many close friends who are in the hunting tradition. Protect Minnesota is not anti-gun. We are anti-gun violence. We are not anti the Second Amendment. We are not trying to take guns away. We just want to make guns safer.

MP: Do you believe that your organization has the support of most Minnesotans?

NNB: The goal of Protect Minnesota is to get the attention of lawmakers statewide and nationally. We provide a platform to say, “People care about this issue. We care about gun safety.”

In a poll conducted by Americans for Responsible Solutions, 86 percent of Minnesotans support closing loopholes in current law that allow convicted felons and domestic abusers to buy guns without a background check at gun shows and online. Why can’t we get this bill out of committee? Who are these lawmakers that are choosing to represent the minority of people in this state who do not want universal background checks? The numbers are clear. You can’t even get 86 percent of Minnesotans to agree that they like ice cream.

MP: You don’t have a significant history of political activism. What led you to this role?

I have been in this role for six months. After San Bernardino, I saw myself typing on Facebook, “If someone would pay me to do gun prevention full time, I’d even leave the parish.” Then I saw the help wanted ad for this position.

I am very fortunate to be getting into this fight now. I care a lot about this issue. I’ve given up a lot for this job. I had a pretty cozy deal as a senior pastor of a 2,000-member congregation, but I left it for this role. I’m all in.

On Sept. 25 from 3 to 7 p.m. at International Market Square in Minneapolis, Protect Minnesota will sponsor The Concert Across America to End Gun Violence. The event features three local bands: R Factor, New Sound Underground and JD Steele, as well as a number of community choirs, children’s activities and, Bence said, “opportunities for participants to engage in the issue of gun violence prevention.” She added: “This party is about getting people who care about this issue to come and dance and laugh and sing and eat and connect with others who share their commitment.” The concert costs $15 for adults and is free for children and students.

Tickets are available at the door or online.