Like many men in the late 1970s, Andy Mickel first heard about the Twin Cities Men’s Center during a hard time in his life.

“I was getting divorced,” he recalled. “I’d just turned 30, and I’d been married for 10 years. If you’d asked me to define what it meant to be a man back then, I would not have been able to tell you. I was lost. ”

One day Mickel was in the old Rusoff & Co bookstore in Dinkytown when he came across a book titled “The Men’s Survival Resource Book: On Being a Man in Today’s World.” The book, which provided resources for modern men struggling to make their way in the world, was written by volunteers from the Twin Cities Men’s Center.

“I bought a copy, and later I went back and bought 20 more copies and gave them away to my friends,” he said.

Mickel was so impressed with the book that a few years later he visited the Men’s Center in Uptown. He kept coming back, eventually becoming a member; editor of “Men Talk,” the center’s newsletter; and, from 1987-1990, volunteer executive director.

Mickel explained that he was drawn to the Men’s Center by its unique focus on issues affecting men. While he sympathized with the principles of feminism, at times he felt like the specific concerns of men got lost in the shuffle.

“I was supportive of the women’s movement,” Mickel said, “but what I came to realize was that I needed to do my own work instead of just helping my unfortunate sisters. I had to go inside and do a lot of work on myself. The people at the Men’s Center understood that.”

This month, the Twin Cities Men’s Center celebrated 40 years of supporting men through critical moments in their lives. Reaching this milestone anniversary sets the group apart; while there were similar organizations in many major cities during the peak of the men’s movement in the mid-to-late 1980s, today the Twin Cities group is one of only a few still in operation nationwide.

And with a dues-paying membership hovering between 250 and 350 (down from a late-’80s high of around 600); a volunteer roster of 100; and a healthy selection of support groups, anger management classes and monthly family law clinics; the Men’s Center still remains vital with plenty of work to do.

“Look at how toxic the culture is for men,” said Harry Greenberg, a Men’s Center board member. “Where are the role models? How do people figure out what masculinity is or what it means to be a man? A lot of men don’t ask themselves those questions unless someone else is bringing it up. That’s why places like the Men’s Center still remain important.”

Last week, some 75 Twin Cities Men’s Center members and supporters gathered in Minneapolis for an anniversary celebration. The group reminisced about the organization’s history, and debated its role going into the future.

Celebrants held a “symbolic support group,” Greenberg said, coming together in one large circle to talk about their lives and their shared experiences as men.

“A lot of the people there didn’t know each other. It was amazing. They just opened up to the power of who we are and what we aren’t as men and what we can bring to the world.” 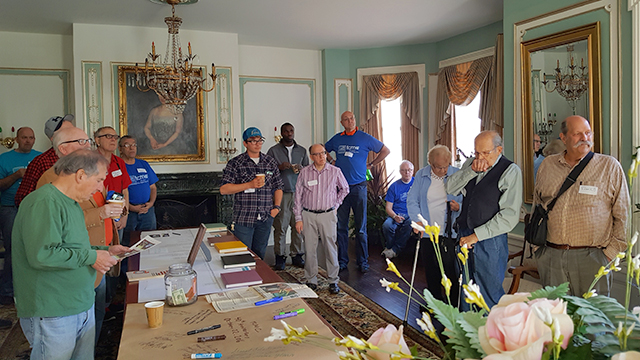 The center still has a role to play for modern men, Greenberg said. While women continue to make gradual progress toward the goal of equal and fair participation, many men continue to be mired in traditional male roles. At the Twin Cities Men’s Center, he said, men are challenged to look beyond those limitations, to discover new ways to be a man in the world.

“The big thing for us is getting men to talk to each other and figure out what we can do to support each other. There is still a huge need for this. Young men do the tech thing now, but I think they are still having the same problems of isolation, competition, trying to live up to the realm of manhood. They could use more targeted support. This is something we know how to provide.”

Over the last four decades, there have been moments when the Men’s Center looked as though it might be folding.

“A couple of times we came close to closing,” Greenberg said, “but we always pulled ourselves together. This is soul work.”

One of the reasons the center has been able to keep moving forward is its relatively low overhead. Most of the work is done by volunteers; the only paid employee has been a part-time office manager who has recently retired. A steady income stream is generated by the organization’s popular Anger Management courses; many participants have been court-ordered to attend. But even this offering is low-cost: A 12-week session is just $250.

Over the organization’s history, a number of Men’s Center initiatives have grown into independent organizations. “The Men’s Center has been a place for some bleeding-edge issues,” Mickel said.

In recent years, some Men’s Center members have suggested that since the organization’s programs have spawned so many successful nonprofits, they should expand their role and take on the status of a full-fledged social service agency.  Mickel said many of the old guard rejected the idea.

“Some of us are members of the Men’s Center because we believe in the men’s center as a change agent. This perspective comes out of the counterculture. We rebelled against the idea of going more mainstream.”

Greenberg and Mickel said that even though they’ve retained their scrappy identity, another reason the Twin Cities Men’s Center has continued to exist when others around the country have folded is because of strong regional support for the men’s movement. The nationally respected Minnesota Men’s Conference was established in 1984 by Minnesota poet, author, and activist Robert Bly, and many local men cut their teeth on his ethos of men’s awareness and empowerment.

“One of the reasons we still have a Men’s Center in the Twin Cities is because of Robert Bly,” Mickel said. “He is important, and he’s right here in Minneapolis.”

‘We still have a lot of work to do’

In order to continue to thrive in a changing world, the Twin Cities Men’s Center must expand its membership, Greenberg said. He’s led groups at the center in the past, and he sees a clear, continued need for the services that the organization provides.

“I think we still have a lot of work to do,” he said. “We have to bring in younger people for sure. I’m 63 years old. And most of the other board members are around my age. How much longer can we go on?”

Mickel theorizes that younger men may not realize the inner strength that they can gain from spending time with other men in a noncompetitive environment.

“The dominant culture that socializes men to be independent and isolated makes it tough for men to realize that they can find emotional support and understanding with other men rather than just running to women for that kind of connection.”

Because he updates and maintains the group’s website, Mickel knows that there is still plenty of interest in the services the Twin Cities Men’s Center offers.

“Our website is pounded on every day,” he said. “We get inquiries from men all over the country. They tell us they wish that they still had something like that in their towns.” The need is there, he explained. It’s just a matter of making men aware that the services exist.

The best way to make sure that more men know about the Twin Cities Men’s Center isn’t clear, though board members are in the process of formulating an official strategic plan. While many women in the United States see the promise of significant social and political change on the horizon, many men report that they feel their social progress has been stalled.

“I wouldn’t say we are moving toward enlightenment at all,” Greenberg said, “but I don’t say we’re going back backwards, either. Maybe we’re just going sideways.” This lack of movement creates great frustration for men, he said: “The same things men were struggling with 30 to 40 years ago have changed form. Technology is keeping us further apart: We need to figure out a way for young men to come together in real time and address these issues, and organizations like the Men’s Center could be the perfect place to do that. ”