A drug counselor and overdose awareness activist, Anderson counsels clients at RS Eden in Minneapolis and serves on the board of directors for the Steve Rummler Hope Foundation, an organization dedicated to reducing opioid overdose deaths through the distribution of Naloxone kits. When he took a good look at Moschino’s Spring/Summer ’17 line, he felt the high-end designer clothes sent a dangerous message: Drugs — especially prescription drugs — are cool and ubiquitous.

“What really started this for me was my work with the Rummler Foundation,” Anderson said. “We are working to fight overdose deaths, which are the leading cause of accidental death in this country. When I saw this fashion line glamorizing drugs and drug use, I just couldn’t let it slide.”

For Anderson, not letting it slide meant contacting U.S. retailers that carried the line — and launching an online petition where signers promised to boycott stores until they dropped Capsule from their shelves. When the petition went live, the merchandise was for sale in stores and online at two major U.S. retailers: Saks Fifth Avenue and Nordstrom.

Anderson’s activism quickly drew signatures — and a storm of national media attention. Last week, Nordstrom announced that it would no longer carry the collection online or in the three stores where it was originally offered. A Nordstrom representative contacted Anderson to inform him of the decision.

“Nordstrom decided that carrying this line was more detrimental to their business than it was good for their business,” Anderson said. “That’s why they took the line down. Nordstrom listened to their customers. They value their role in the community, and they took action. No matter what happens going forward, it’s a huge victory.”

One down, one to go

Nordstrom’s response to his petition meant that Anderson’s campaign now has a narrower focus — Saks and Moschino.

So far, Saks has given Anderson no indication that it will pull the line from its stores. He reported a generic response from the retailer, a short email saying: “At Saks.com, we are committed to learning from our customers’ feedback how we can provide a more meaningful experience in the future.” The products remain for sale in stores and online.

“We’re still pushing Saks to budge,” Anderson said, adding that so far Moschino has iced him out. Anderson hasn’t had an official response from the designer, only an annoyed “shoo-fly” reaction: “Moschino blocked me from their Facebook page.” 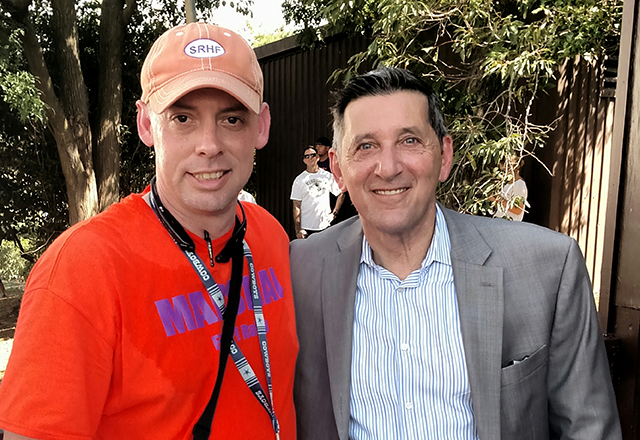 Courtesy of Randy Anderson
Randy Anderson, left, and Michael Botticelli, director of the White House Office of National Drug Control Policy, at a Fed Up Rally on Sept. 18, 2016.

Anderson confessed that he isn’t optimistic about his campaign’s chances with Saks. “I’m going to be real honest. Unless 300 people go into a store and physically do something to get their attention, we won’t get Saks to do anything. I don’t think they care about this petition.” Or a Midwestern guy on a mission, for that matter. “They don’t have the same moral compass that a store like Nordstrom has.”

Anderson said he thinks that Saks may be banking on the belief that the power of celebrity — combined with the press attention his campaign has stirred up — will actually boost sales of the line.

“Rihanna has one of the Capsule phone cases,” Anderson said. Pictures of her with the case — which looks like a large prescription-pill bottle — have been posted on Instagram. “I don’t think we have as much influence with Saks as we did with Nordstrom,” Anderson admitted. “Many of the people who signed my petition so far don’t even shop at Saks. They don’t have influence if they can’t hit them in the pocketbook. They are working in a completely different world.”

Fashion media saw the Capsule collection in a different light from the way Anderson and his petition signers did. In the Fashionista blog, for instance, the line, brainchild of Moschino Creative Director Jeremy Scott, was described as a sophisticated commentary on “consumerism, design copyright, the pitfalls fame, the fleeting nature of fashion, drugs.” New York Magazine agreed, describing it as a “kitschy Valley of the Dolls homage.”

Anderson doesn’t see it that way. “I don’t know the exact wording, but Jeremy Scott wrote somewhere that his drug is art,” he said. “He said he wanted to show his drug of choice in his work.” Anderson isn’t buying that: “I’m not a conspiracy theorist, but I am going to throw this out there anyway: Traditionally, Big Pharma has found very creative ways to market their products to mainstream culture. This campaign smells of Big Pharma to me.”

Moschino dismisses any connections between its clothing and the prescription drug industry. In a widely circulated public comment, a spokesperson for the line stated, “The Moschino Capsule collection was inspired by a play on the word ‘capsule’ translated literally as a collection of ‘capsule-themed’ products. There was never any intent to promote prescription drug abuse. We are disheartened to hear that there has been a misunderstanding of the underlying theme of the collection.”

To Anderson, the line’s brightly colored playfulness seems created to appeal to young people in the tradition of Camel cigarettes’ Joe Camel. Pricing for the items — a prescription-bottle bag is $950, and a textured leather shoulder bag that mimics a prescription-pill blister pack is $1,095 — puts them in the hands of celebrities, who get social media coverage for their fashion choices.

“The more celebrities have something, the more regular people will want it,” Anderson said. “If Rhianna is seen with a phone case that looks like a pill bottle, every teen girl will want one of those.”

This week, after Nordstrom stopped selling the line and media attention seemed to be dying down, Anderson was surprised by a sudden surge in signers for his petition, from 1,600 to 2,473. He’s not 100 percent certain where the support came from.

“The Washington Post ran an article on the petition,” he said. “They had links to other articles, links to the petition.” Last week, Anderson also got an email from the Partnership for Drug-Free Kids, informing him that the organization had started its own anti-Capsule petition, which it was circulating to its extensive email list.

“This thing has gone beyond my network; in a way it’s out of my hands,” Anderson said. Maybe that’s a good thing, he allowed: “I think this campaign can get even bigger if it takes on a life of its own.”