Natalie Bushaw and her husband, Ben, started their CaringBridge page in June 2003 when they learned that their twin sons would be born with serious birth defects. In the years since, as their sons have undergone more than 30 heart procedures and myriad medical crises, the Bushaws have used the site for emotional strength, support and a reminder of the caring community that surrounds their family.

“I learned about CaringBridge while I was in the hospital before the boys were born,” Bushaw said. “I started my site then, and I’ve never stopped. There always seems to be something that we need to ask for prayers for. It’s the place where we go for comfort and strength, for words of encouragement and just to know so many people are along with us on our journey.”

This is exactly the kind of supportive community Sona Mehring, CaringBridge’s Minnesota-based founder and chief ambassador, was hoping to build 20 years ago when she created the free health-information-and-update website as a way to spread news about the medical condition of Brighid, her good friends’ gravely ill infant daughter.

“During her pregnancy, my friend JoAnn was rushed to the hospital,” Mehring recalled. “She couldn’t have visitors. I said, ‘What can I do to help?’ She said, ‘Can you call everyone?’ I realized how much work that would be, and how emotionally draining.” Mehring, who owned a consulting firm that was working on webpage development, came up with an idea that fit neatly within her skillset: “I thought, ‘I’m going to create a website.’ The night that Brighid was born CaringBridge was born.”

Sadly, Baby Brighid lived just nine days, but Mehring said, “During those nine days we saw the positive impact of CaringBridge.” Her friends felt supported and encouraged by a community that went far beyond an isolated society of posters hidden behind their computer screens.

“That first CaringBridge site was so powerful,” Mehring said. “When we gathered for Brighid’s memorial service, we realized that we were all connected at a powerful level, and the site had done that for us. We even read from some of the entries.”

Mehring, who considers herself an “early adopter” who saw the potential of the Web to build emotional connections between individuals, said she realized that CaringBridge was a strong idea from the start. Two decades after its launch, a new CaringBridge site is created every seven minutes, and last February the site hit more than 2 billion visits.

“A lot of people ask me, ‘Did you ever think that this many people would use it?’ ” Mehring said. “My answer is ‘Yes.’ I knew there was this amazing connection here that was going to be extremely powerful.” 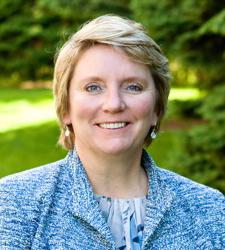 Today, Mehring said, “CaringBridge is the first and the largest social network focused on health. One out of nine people in the U.S. have used CaringBridge.” The site was founded before Facebook.

Minnesota is the state with the most users, Mehring said: “In 2015, 8 percent of all CaringBridge sites created were from Minnesota. We have had almost 17 million visits in Minnesota alone. About three out of four people in the state have used CaringBridge.”

The reason for her nonprofit’s success boils down to one basic truth, Mehring said: “At some point in their life, everyone — or someone they know — will face some kind of health journey. And when you are going through a health journey you need that emotional support. CaringBridge is a way to provide that support almost instantly.”

And for some users, the simple act of writing entries detailing their specific concerns turns out to be an important step toward healing.

“Many times keeping up the site becomes very therapeutic for the author and the patient and the caregiver as they are able to write down what they’re going through,” Mehring said. “It becomes a kind of lifeline.”

For Bushaw and her husband, CaringBridge has, over the years, provided connections that have buoyed their family up through hard times. Logan and Owen, the now-13-year-old twins, have had stretches of robust health, but they’ve also had more than their share of serious struggles. They’ve kept up their site since the beginning.

When Logan’s heart began to fail last December, the family went on CaringBridge to ask for support; when he underwent a heart transplant in July, friends and family rallied around the Bushaws, turning to their page for updates and information — and to offer help when needed.

“Its almost like CaringBridge has a power that comes through it that provides superhuman strength,” Bushaw said. “I feel we would not be where we are today without CaringBridge.”

After a transplant-rejection scare in September (carefully chronicled on CaringBridge), Bushaw said that Logan’s “body and his heart seem to be getting along really well right now.”

The boys are at home in Inver Grove Heights, going to school and living normal teenage lives, but Bushaw knows that if another health issue should arise, community support is just a post away.

“If I hear about someone going through a health crisis, I’m always suggesting CaringBridge because I know what it’s done for me,” Bushaw said. “I know at least a dozen or more people who have created their page after following ours.”

This matches with Mehring’s two-decade-long experience with her creation.

“I’m a true believer that there are unbelievable opportunities online,” Mehring said. While the Internet does have its share of scammers and trolls, so far, at least, CaringBridge has remained a supportive, well-intentioned community where its legions of users are protected from abuse: “There is an amazing amount of goodness that comes out of our ability to connect anytime anywhere. What we’ve been able to do here is a great example of that.”

CaringBridge officially became a nonprofit in 2002. The site runs on donations, mainly from people who’ve benefited from its services.

“The very first check I got was for $100,” Mehring said. “This was back in 1997. This was when people still put their phone number on their checks. So I called her and she said, ‘I would have never known my granddaughter without CaringBridge. You need this site for every grandmother.’”

Nonprofit wasn’t the recognized revenue model for websites back when CaringBridge was founded, and it still isn’t.

“In 1997 the No. 1 way to collect revenue for a website was to sell data and manipulate content and have ads,” Mehring said. “I knew that wasn’t the right model for this site. It needed to be a more protected space.”

By creating a space that feels safe and free of advertising, Mehring believes she’s built a community where people feel comfortable sharing their and their loved ones’ private information — without fear that it will be shared with others. Mehring and her staff believe that privacy is key to the site’s continued success.

In the coming years, she sees the CaringBridge continuing to grow as more people hear about this online community focused around what they call “the health journey.”

“It is amazing that CaringBridge been relevant and growing for 20 years,” Mehring said. “That itself is a testament of the impact of CaringBridge and the underlying need for the site. I think the next 20 years have so much more opportunity.” As more and more people realize the power of the internet for building strong connections, more will turn CaringBridge in times of health crisis, Mehring added: “We’re really positioned to continue to be very impactful going forward in the areas of mental and emotional health.”