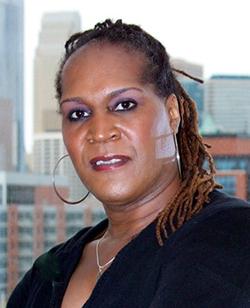 Andrea Jenkins is perfectly qualified for her job. A poet, storyteller and political activist, she’s brought her deep connections in the Twin Cities transgender community to her work as lead oral historian for the University of Minnesota’s Transgender Oral History Project of the Upper Midwest.

For some people, finding and recruiting enough participants to be interviewed for such a large-scale project could seem like a daunting task, but Jenkins feels she is more than up to the challenge.

“Part of the appeal of bringing me in on the project is I have this long history of being involved in the transgender community,” she said. “I am transgender myself. I have a large network of friends and colleagues and associates who are transgender. Because of that, quite honestly, the recruitment hasn’t been that big of an issue.”

It also helps that Jenkins isn’t shy. “I do a lot of public speaking around the Twin Cities and I’m always talking about the project,” she said. “That is a form of recruitment in itself.”

Members of the Tretter Collection’s board of directors came up with the idea for the oral history project.

“Lisa Vecoli, the curator of the Tretter Collection, was interested in adding a variety of voices that have been absent from the archives, including lesbian and bisexual identities as well as transgender identities,” Jenkins said. “She, along with some Tretter board members, developed the plan and wrote the proposal.”

Eventually, the Chicago-based Tawani Foundation agreed to provide support, and Jenkins, a former Minneapolis City Council policy aide, was brought in to oversee the project.

“I have been involved in every single aspect of the project from recruiting interview subjects to scheduling to filming and uploading the video,” Jenkins said. “The only thing I don’t do is the interview transcriptions.” She laughed: “We send that out to a contractor.”

The project was launched in April 2015, and interviews began in July of that year.

“It took a while to get the community together, to purchase equipment, to get legal advice around permissions, to identify and schedule the interviews,” Jenkins explained. “Once we started the interviews, it was still a process. We have to get the interviews transcribed. We have to make sure that the participants are comfortable with those transcriptions. That in and of itself can be an up to 90-day process.”

So far Jenkins has interviewed 118 people. Members of an advisory committee developed a list of possible interview questions, which Jenkins uses as a framework for her interviews.

“I ask about 80 percent of the same questions in each interview,” she said, “but everyone is going to have different answers to each question.” Jenkins does background research on each interview subject, to enhance her conversations: “I also ask some more individualized questions, depending on the person I am interviewing.”

More completed interviews will be added to the archive in the coming months.

Out of the shadows

While transgender people are becoming more accepted in mainstream American culture, it wasn’t all that long ago that people who identified as a different gender than the one they were assigned at birth felt that they needed to hide their true identities.

That enforced secrecy, Jenkins said, is the reason there is not a lot of historical information available about the transgender community, and why oral histories may be the best way to record those valuable stories.

“Because so many people were in the closet about their identity, there were all these barriers to people organizing themselves in groups and maintaining documents,” she said. “This has been difficult for the trans community, and tough for anyone who wants to keep track of its history.”

When the Tretter oral history project was launched, there was some concern that the same sense of shame and secrecy would limit the number of people willing to be interviewed on tape, Jenkins said.

“When we first started working on this project, there was some talk about how there could be privacy concerns, but people have been very receptive and willing to participate in the project. They tell their friends about their participation and sometimes they provide names of other people who might want to be involved in the project.”

While some participants have placed restrictions on when their interviews can be released or how they can be used, for most, privacy concerns seem to be a thing of the past.

“That might have been a big concern 20 years ago,” Jenkins said. “But in 2016 transgender people are eager to tell their stories.”

The reason for this openness and enthusiasm is twofold, Jenkins believes.

“I think we have entered an age where transgender people are really open and honest about their lives. They’re not trying to hide. A big part of coming out is about authenticity. Another part of the openness is a feeling that it’s important to represent the transgender reality, to show that we are here and we’re not going away.”

Not so long ago, gender nonconformity was considered a mental illness, but the American Psychiatric Association, publisher of the DSM-5, now states that it is not a mental disorder.

That said, many transgender people — like many cisgender people — do live with mental illness. Societal pressures that force a person to conceal his or her true gender identity can cause mental illnesses like anxiety and depression, Jenkins believes. Because of that fact, many of her interview subjects talked openly about their struggles with their mental health.

Jenkins believes that openness about struggles with mental illness will be helpful for many people who are likely to view her interviews, including young people who are working to understand their gender identity, researchers, political activists, filmmakers and writers.

“People who are neurodivergent, whose brains function in ways that are ‘outside’ the norm, may be really up-front about their mental health concerns,” Jenkins said. “Some people who are transgender consider themselves neurodivergent.”

Though the potential audience for her interviews is large, Jenkins said that she thinks that the most important role these videos and transcripts can play is to create a history of a group of people who for so many years lived outside of historical documentation.

“We really want to document these stories as a way of including some histories of the transgender community in the archive,” Jenkins said. “One of the things I often hear in my interviews is that many transgender people never had access to positive role models growing up. So being able to see examples of transgender people who are having successful lives and successful relationships would mean so much to them — and to young people growing up now. In a way, I think that’s one of the most important things this collection can do.”