The University of Minnesota’s Aurora Center for Advocacy and Education was established in 1986 in response to the alleged sexual assault of an 18-year-old woman by three Gopher basketball players while the team was on the road in Madison, Wisconsin.

“At the time,” explained Katie Eichele, Aurora Center director, “then-University of Minnesota President Ken Keller said, ‘We cannot have this in our community or on our campus.’ That’s how the Aurora Center was founded.”

Thirty years later, the Aurora Center, one of the first such programs in the country, continues to focus on its mission to provide emotional support and advocacy for University of Minnesota students in cases of sexual violence, relationship violence, sexual harassment and stalking.

Since 2011, when the U.S. Department of Education issued a “Dear Colleague” letter stating that acts of sexual harassment and sexual violence violated individual rights to equal education under Title IX, many more colleges and universities have introduced similar programs.

“College campuses all over the country had to re-examine their policies and practices and protocols because of this statement,” Eichele said. The Aurora Center’s three-decade-long history placed the university at the forefront of victim/survivor advocacy, Eichele said: Members of the U of M campus community already have a long history of access to a network of established support and connections that are only just being built at other schools.

“Within the Big 10, we have a number of schools that now mirror the type of setup that we have where we provide not only direct service and comprehensive education programs as well as a large number of volunteers,” Eichele said. “But a lot of campuses don’t still have their own stand-alone program. They contract with the local rape-crisis center.”

This fall, in acknowledgment of the center’s commitment to “creating an inclusive environment where sexual assault, relationship violence and stalking are unacceptable,” Gov. Mark Dayton declared Nov. 17, 2016 to be Aurora Center for Advocacy and Education Day [PDF].

The declaration was “a great way to recognize our focus on our mission,” Eichele said. “It confirms the work we’ve done over the last 30 years to make the university a safer place for everyone.”

Recent events underscore the fact that the Aurora Center’s work is far from done.

In December, when a group of 10 U of M football players were suspended after an alleged sexual assault, center staff and volunteers stood in solidarity with the victim — and with all victim/survivors of sexual violence. A group attended an on-campus rally on Dec. 17, expressing their outrage over the incident — and their firm commitment to ending sexual violence. 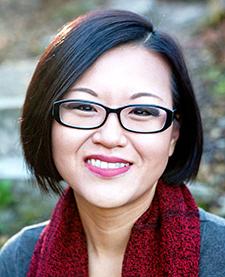 While Eichele explained that she is “not comfortable talking about any active [legal] case on campus,” she emphasized that “our center has always and will always stay true to our mission. We serve as educators and partners to the campus community in making sure that sexual assault and harassment victim/survivors get the direction and support they need.”

Aurora’s 12 paid staff (five are paid student workers) and some 100 student volunteers provide support to the campus community in a variety of ways, including hosting a range of support groups; staging educational programs for all incoming students; staffing a 24-hour crisis line; providing face-to-face counseling (all advocates are state-certified) and legal advocacy services; and supporting victim/survivors in hospital settings.

“We respond to three emergency departments near the campus if a student goes in for a rape kit or a forensic exam,” Eichele explained. “We send an advocate to be there with the individual for the exam.”

Aurora does not employ licensed therapists, but it does partner with on-campus mental health resources, including Student Counseling Services and Boynton Mental Health Services. When needed, clients are referred to those programs for further services.

The center is a busy place, much busier than Eichele and her colleagues would like it to be.

One way to reduce the number of sexual assaults on college campuses is to build awareness of the problem. Eichele and her colleagues say that education is key to sexual-violence reduction; when more people understand the extent of the problem, more people will want to work to make it stop.

“Up until about 2011, we were spending a lot of time just trying to convince campus leaders and students that that sexual assault is a prominent issue in campus communities,” Eichele said. “It is a big problem, and we have made that clear: We have over 35 years of research to back that up. A number of reputable studies have shown that 1 in five college women experience rape or attempted rape while in college.” 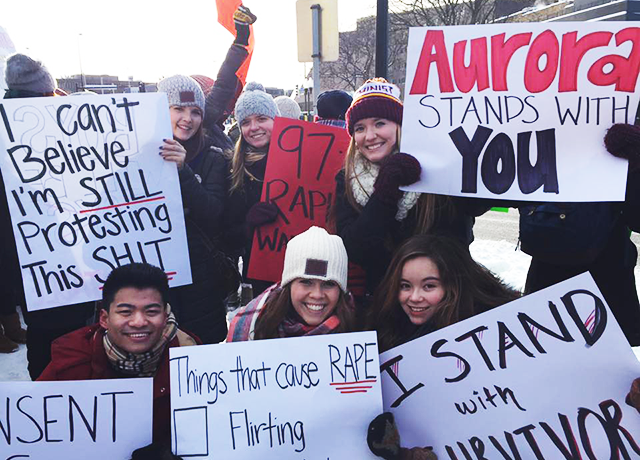 Courtesy of the Aurora Center
Aurora staff and volunteers at a rally in support of sexual assault survivors at the University of Minnesota on Dec. 17, 2016.

That 1 in 5 number has remained steady throughout the Aurora Center’s history, causing Eichele to describe it as an “endemic situation, not an epidemic,” but that doesn’t mean that she is willing to accept that the number will always stay the same. Just because it hasn’t shifted doesn’t mean that it can’t.

Aurora’s latest push is to encourage less shame and more awareness around sexual violence, so that people are feel willing to speak out when it happens to them — or intervene when they see it happening to others.

“Breaking the silence is one of the biggest stepping stones in helping people resolve this issue,” Eichele said. “When people are more willing to report, people get better and better at accountability.”

After decades of focusing on women, Aurora hired a men’s engagement coordinator, who will be tasked with bringing more men into the fight.

“That person will have three foci,” Eichele said. “The first is to get more male survivors to come in and seek services. The second is to continue our bystander intervention program empowering men to intervene. The third is teaching men peer accountability — how to talk with their family, their Greek brother, their best friend, their team member about how that is not OK behavior.”

Eichele said she hopes that innovations like this will help advance the Aurora Center’s work. While she’s heartened by increased awareness of the dangers of sexual violence on college campuses, she sometimes feels discouraged that more progress has not been made.

“When folks ask me, ‘When will you know that you’re making a difference?’ I say, ‘I’ll know when I can see that the number of 1 in 5 college women experiencing sexual violence goes down to the same rate that men experience those types of incidents,” Eichele said. “One in 70 or one in 60 men experience rape in their lifetime. That’s a big difference.” While no incidents of sexual violence are acceptable, she said, with continued support and public education, fewer are achievable: “That’s our goal, and we’ll continue working toward that.”

30 years in, Aurora Center is still supporting U of M sexual-violence survivors