Earlier this year, Sue Abderholden wrapped up a 40-city statewide tour. Unlike an actor, a musician, or even a politician who regularly tours the state, Abderholden, executive director of the Minnesota chapter of the National Alliance on Mental Illness (NAMI-Minnesota), wasn’t greeted at each stop by throngs of fans and supporters. Instead, she quietly met with groups of activists, mental health care providers and people with mental illness and their family members who wanted to talk about the state of mental health care in Minnesota.

Why did Abderholden hit the road? NAMI, the powerful statewide nonprofit she’s led for the last 15 years, is celebrating its 40th anniversary in 2017, and Abderholden wanted to meet face-to-face with people who are interested in the mental health movement.

Abderholden said that traveling to so many cities and small towns felt exhausting at times, but she was also inspired by the energy and commitment that emanated from the people she met.

“The tour was an amazing, expansive experience,” she said. Traveling to so many communities was, Abderholden laughed, “pretty grueling, but it was also really, really good.”

Besides being a time for catch up and check ins, the meetings with local activists were an opportunity to talk about the legislative accomplishments NAMI and its many coalitions have championed for Minnesotans with mental illness and their families.

“One thing I realized while was I was on this tour is that a lot of people in the state don’t know about all the positive changes that have taken place for people with mental illness,” Abderholden said. “I was able to spread some good news to people who don’t always get to hear a lot of good news, and that was satisfying.”

Abderholden especially enjoyed the personal connections she was able to make at the meetings. One evening, for example, “a family came up to me after my presentation and said, ‘Our son has been sick for many, many years. Tonight was the first time we felt hope.’”

The 40 statewide meetings, which were arranged by a combination of NAMI staff and local activists, weren’t just spent sharing good news, however. There was also plenty of time for attendees to talk about things that aren’t going well for Minnesotans with mental illness.

“After I presented the history of the mental health movement and NAMI, I also got feedback from people about barriers that still exist in their communities,” Abderholden said. “I heard from people about what more needs to be done in the state’s mental health system. I also met with providers so I could hear directly from them about the issues they are facing.”

Aberholden collected a list of the issues of concern that were raised by audience members on her statewide tour. They include:

“There still is a long list of entirely legitimate issues,” Abderholden said. “And in Greater Minnesota, some of the concerns around isolation and lack of access to mental health providers are particularly acute.” By the end of the tour, Abderholden said, she’d already assembled a new list of legislative priorities, many of which she is preparing to tackle in future legislative sessions.

Having an outspoken advocate like Abderholden at the helm of NAMI-Minnesota is key: The organization’s legislative focus is an important part of its history.

Founded in 1976 by “a small group of mainly women, mothers of children who struggled with mental illness,” Abderholden said, NAMI-Minnesota has always focused on working with lawmakers to change discriminatory laws and direct money to services that directly benefit people with mental illness. 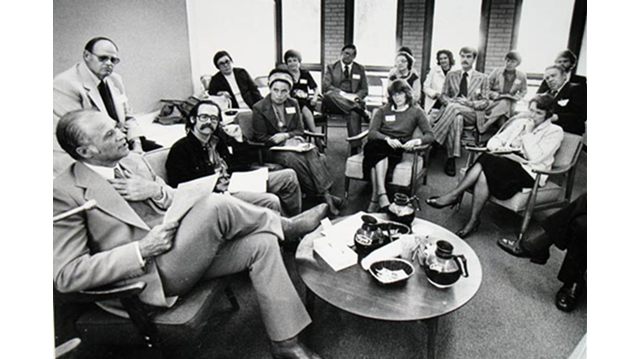 “NAMI’s founders were very upset that the state was going to close Hastings State Hospital without moving the dollars into the community to assist the people this move was going to displace,” Abderholden said. “They worked tirelessly to get legislation passed to make sure that there would be funding for supports for Minnesotans with mental illness.”

These advocates were so determined to get the money to create community mental health services that they barraged legislators with phone calls and personal visits, demanding the transfer of funds. Eventually $1.5 million was set aside for this purpose. It was an early victory for a group that has continued to vigorously advocate for the rights of people with mental illness.

NAMI-Minnesota will continue to mark its 40th anniversary all year in a number of ways, including collecting 40 stories of 40 people who have strong ties to the organization’s history. The taped interviews will be featured on “Mental Health In Minnesota,” a new podcast created by NAMI-Minnesota. The podcast is available on iTunes. 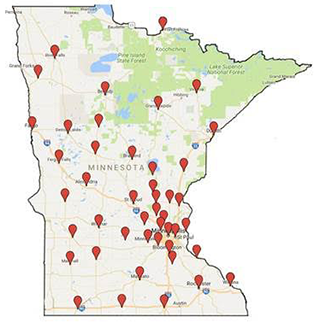 The anniversary celebration will continue at NAMI’s annual Spring Gala on Saturday, May 6, at the Hilton Minneapolis, 1001 Marquette Ave. The theme of the event is “NAMI Superheroes — Celebrating 40 years of Hope!”

“This will be a great event where people involved in supporting NAMI over all these years can all come together and acknowledge our successes,” Abderholden said.

Staff has produced a video they hope to show at the Gala, which focuses on the stories of people who founded the organization and what motivated their activism.

“It’s inspiring to be able to hear from these folks, some of whom are still alive,” Abderholden said. “Their work really unleashed this grass-roots movement to change not only the laws but also public attitudes about mental health. What they created is really just amazing.”