In December 2012, when Tom and Bonnie Gallagher brought home a Labrador retriever for Christmas, it felt like an act of desperation.

For two years, the Gallaghers’ youngest daughter, Carrie, been consumed by crippling depression, anxiety and PTSD after being sexually assaulted by three boys when she was 12 years old. Carrie —who’d previously been, her mother said, “bright and happy” — was prone to anxiety attacks and flashbacks that left her mute and nearly comatose, or tearing out the door of her house or school and away to parts unknown. It seemed there was nothing Carrie’s parents or her older sister, Allison, could do to help her.

“She was a runner,” Bonnie Gallagher said. “When Carrie got flashbacks or severe anxiety attacks, usually she’d just take off. She was oblivious to where she was going. When we’d eventually find her, she’d be curled up in a ball, hoping to die.” As a way to release some of the tension and sadness building in her body, Carrie cut her arms and legs with any sharp object she could find. When there were no sharp objects nearby, Carrie would dig at her skin with her fingernails. “She destroyed her arms with all the cutting,” Bonnie recalled.

As Carrie slipped further and further away from her family, her desperate parents tried everything — including placing her in a range of residential mental health facilities.

“It was constant,” Bonnie said. “We tried every kind of program. Eventually she had stayed in every facility in town that had a mental health unit. Nothing seemed to help.”

Determined to help their daughter heal — and keep her out of hospitals — Bonnie quit her job. “I didn’t want to lock Carrie up for the rest of her life,” she said. “That just wasn’t an option for us. So we all decided I needed to be home so I could manage her care.”

Around this time Tom and Bonnie decided that it might be a good idea to bring a dog into the family. They’d heard about how canine companionship helps some humans cope with trauma, and when Tom’s friend offered to give them a puppy from his prize-winning lab’s latest litter, they decided to take a leap of faith. The family had never wanted a dog before, and it was a stressful time to bring one into their family, but they felt they had nothing to lose.

‘He looked out for her’

The leap of faith was an 8-week-old red lab puppy named Scout. From the start, Bonnie and Tom did everything they could to make sure that Scout and Carrie were on firm footing.

“We wanted the two of them to have a strong bond,” Bonnie explained. “When Scout was a pup, I had Carrie sleep with me with the dog nearby. When Scout got up to pee in the middle of the night, she took him out. She fed him. She picked up his poop. She went to puppy classes with him. She did everything for him, so he naturally gravitated toward her. He was her dog and he looked out for her.”

“At that point it started to seem like everything got a little bit easier for her,” Bonnie said.  “Whether it was her schoolwork, her ability to make new friends, her general confidence: It was amazing. We brought Scout everywhere. With him around, she had more guts to start going back to school on a part-time basis and eventually moving back to full time.”

If Carrie started a flashback or a panic attack, Bonnie said, “Scout would come to us and tell us. Then we would go find her and she’d be just kind of gone. Scout would nudge her and nose her and lick her face and before you’d know it she was out of it and even playing with him on the floor.”

Scout was Carrie’s built-in companion and support staff, her mother said. Back at Blaine High School, she began making friends, passed her driver’s test, started volunteering at the Humane Society and even got a part-time job at TJ Maxx. Things were looking up.

Carrie knew how much Scout had done to help make her life easier, Bonnie said. She told her parents that she wanted to help others who struggled with similar mental health diagnoses experience the joy of having a dog in their lives. When a family friend revealed that she was struggling with anxiety, Carrie encouraged her adopt a rescue dog.

“Scout was so important in Carrie’s life,” Bonnie said. “She knew how much he had helped her. She wanted to help others feel the same way.”

Though Carrie seemed to be getting back on firm footing, her mother and sister always worried that someday the pain of her trauma might be more than she could bear.

“Carrie’s illness was so severe,” Bonnie said. “It was like she was a person with a terminal illness. Alison and I were positive we would lose her eventually. We just didn’t know when.”

Then, on Sept. 7, 2014, nearly two years after Scout came into her life, Carrie died by suicide. Even though they suspected that this might happen someday, her family was still shocked by her death.

The family felt destroyed by the loss. Bonnie slipped into a deep depression, spending her days in bed, buried under the covers. Scout, without Carrie to look out for, began to keep an eye on Bonnie, nudging her several times a day to take him out for a walk.

“I knew I had to get out of bed more than once each day because I had to take Scout out,” Bonnie said. “It forced me to break the cycle of grief. I’d bring him to the dog park, which made me get outside.” She laughed, ruefully, at that simple doglike persistence, the nudge with the wet nose, the soulful eyes that peered at her silently:  “A dog lives in the moment,” she said. “They are loyal, and they somehow know how to help you get what you need.”

Tom, Bonnie and Allison agreed that they wanted to do something significant in Carrie’s memory. They talked about a number of ideas, but they all agreed that that significant thing — whatever it was — needed to help lighten the load for people with depression, anxiety and PTSD. And if the help came in form of a dog, that would be even better.

“Right after Carrie died, Tom and I were going through the memorial cards,” Bonnie said. We decided to set $1,000 aside to give somebody in need a dog in Carrie’s memory. We knew she would’ve really liked that.”

The family purchased an English mastiff puppy for an old friend who lived with anxiety and depression. “Her father and her grandfather had died by suicide,” Bonnie explained. “She struggled with mental illness. After we purchased the dog for her, it felt so right that we realized we wanted to turn this into something bigger.”

So Bonnie, Tom, Allison and Bonnie’s younger sister Kelli O’Neil set up a golf tournament to see if they could raise funds to support their idea. When the tournament was a success, they hired a lawyer, recruited board members and established a nonprofit they dubbed K9s From Carrie. The organization’s goal was simple: To match people with mental illness with dogs that could be trained to provide emotional support.

K9s From Carrie does not advertise its services. So far people have learned about the program through word of mouth, Bonnie said: “We’ll get calls from the recipients themselves or from a family member. A few therapists know who we are, and they have recommended us to their patients.” 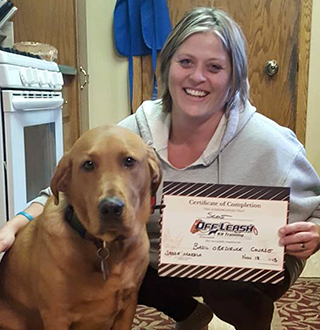 Courtesy of the Gallagher family
Bonnie Gallagher and Scout after Scout completed a K9
training course.

Matching a human in need to a therapy dog is detailed process, Bonnie said. Bonnie meets with with each client to assess his or her needs, and uses the organization’s funds to purchase a dog — either from a breeder or a rescue organization.

Each dog comes with a $200 pet store gift card and a kennel, plus obedience training from Off-Leash K-9 Training. So far 23 dogs and people have been matched and completed the training process. “We are currently working with four more people,” Bonnie said. “And we’ve got 12 on the waiting list.”

The organization runs on a lean budget.

K9s From Carrie recently held a fundraiser in Big Lake called the Doggie Dash. Bonnie said she hopes that the money raised from the event will get “four or five people off the waiting list.”

Running a nonprofit takes a lot of time and commitment, and these days Bonnie has gone back to work. But she, her fellow cofounders and the organization’s board are committed to helping K9s From Carrie grow.

“This year we committed ourselves to trying hard to get out there and raise more money through grant writing, speaking in front of people and just getting our story out,” she said.

All this represents a lot of work, but Bonnie said she knows it’s worth it.

“From what we have seen with others and what we went through in our own personal lives, we know that there is that tactile response of sitting next to a dog and feeling their fur and their wet nose that can bring a person out of their head get them back into the here and now. I’m not telling you that a dog will save your life, but I will guarantee that if you have a dog, you will have some awesome, love-filled days. And the more awesome days you have, the better your life will be. Who doesn’t want that?”