Many people with autism spectrum disorder (ASD) have a hard time figuring out how to get from one place to another. This navigational challenge can be difficult, especially when a person goes somewhere for the first time. And children with ASD often have a great deal of anxiety around the idea of finding their way around a large building like a school. They worry about what they will do if they get separated from parents or teachers and have to find their way alone.

Julie Irish, an interior designer and Ph.D. graduate of the University of Minnesota’s College of Design, took that reality into account when she designed a new building for Ty Gwyn, a school for children with disabilities in Cardiff, Wales. The school, which provides services for children with severe autism, hired Irish and her team to create a space that was accessible for even the most disabled students.

Irish created the school on the principle of universal design, an approach that involves using design techniques to make buildings accessible to all, no matter what their disability. Irish was well trained in universal design — she has a master of science degree in inclusive environment from the University of Reading — but she soon realized that there was little existing research that could help her create a design tailored to a population with ASD.

Part of the basic element of universal design is that everyone should be able to freely enter and use the building. Irish knew she had physical accessibility issues down pat, but she understood that that the goal of the building was to aim to be accessible for people who sometimes struggle to navigate within the space.

“Adults with autism have talked or written about how they have a lot of fear of getting lost,” Irish explained. “They don’t see the world in the same way that other people do. That can make navigation hard. I wanted to create a building that would be clear and easy to navigate, no matter how your brain works.”

Wayfinding to the rescue

Irish decided to incorporate wayfinding navigational techniques in her school design, using colors and shapes to indicate areas of the building and signs with pictures as well as words to show the people inhabiting the building how to get from one place to another.

As she was developing Ty Gwyn’s design, Irish researched expert approaches to navigation for people with ASD. To her surprise, she found nothing — no research on the topic, no scholarly conclusions, no best-practices reports.

“There was absolutely nothing to tell me how to do this,” Irish said. “I was on my own.”

So Irish set out to get advice from ASD experts. She visited other schools and spoke with people who work with children with ASD. “I got lots of ideas about what might help,” she said. She took those ideas and incorporated them into her final Ty Gwyn wayfinding design.

“The particular aids I used were colored signs that included pictures as well as words,” Irish said. “A lot of children with autism learn by pictures rather than by words. I also used colored doors and colored shapes on the floor.”

Students and educators at Ty Gwyn were pleased with Irish’s final design, but she always has lingering feeling that her project was somewhat incomplete — from a scientific perspective, at least.

“I never had the opportunity to test the aids to see if they conclusively worked,” she said. “That left me feeling like there was still research to be done.”

In 2011, Irish moved to Minnesota with her family, and enrolled in the Ph.D. program at the University of Minnesota’s College of Design. It didn’t take long for her to settle on a dissertation focus: wayfinding and accessibility for children with ASD. She wanted to get to the bottom of a project she’d started all those years ago when she designed the Welsh school.

“The aspect I particularly focused on in my research was wayfinding,” Irish said. “I did all the research while I was at the University of Minnesota and did my dissertation based on this project.”

Now settled in Minnesota, Irish set out to find a school district where she could test her wayfinding methods. After several months, she eventually located a Midwestern school that agreed to let her run her test during a summer session for children with ASD. Irish was asked not to reveal the school’s identity. 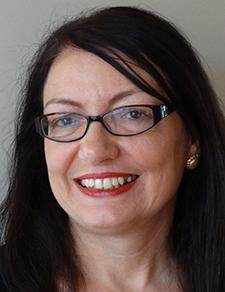 “For my research, I wanted to set up a wayfinding route in a school corridor,” Irish said. “It needed to be an area of the school that the children tested weren’t familiar with.” Though the test route needed to be unfamiliar to the children, it also needed to be part of a building that they felt comfortable in. “You don’t want to take children with autism out of their routine,” Irish said. “So I conducted research in a summer-school program that they had already attended.”

Part of the school was cordoned off for cleaning that summer, so Irish was able to set up test corridors in that part of the building.

She broke the children into two groups: a test group and a control group. Then she began the study.

“I gave each child individual instruction in wayfinding,” Irish said. Because many of the children she took on the route said they were really worried they wouldn’t find their way, Irish explained, “I didn’t let them find their way on their own. I gave them instructions on how the route worked.”

Both groups of children went though the route differently.

When the test was completed, Irish compared results from the two groups, interviewing each child individually about their experience and what they could remember from the test.

“The most interesting thing I found was that a lot of the children didn’t see the environment in the same way that we would,” she said. Rather than relying on her wayfinding aids, many children “looked at little details, and remembered those small details — one child reported that she remembered a scrape on the floor, and she said she knew she was going the right way because she saw the little scrape on the floor as she passed by.”

Irish’s hypothesis was that the group that used the colored wayfinding aids would be able to find their way around the route more quickly than the children who didn’t have the aids.

“It turned out that the test group could remember all the colors in the corridor and the shapes, which made their tasks slightly easier,” she continued. But the children in the other group were able to independently decipher the route.

One heartening lesson that Irish took away from her study was that it seems as if children with ASD are able to achieve greater independence if they have a basic tutorial in how to navigate a space.

“From an educational point of view the most important thing that came out of the research is the finding that children of that high functioning level of autism can be taught wayfinding, whether they have colored aids or existing features in the school,” Irish said. “That gives teaches more educational opportunities.”

Even though Irish’s results differed slightly from her hypothesis, she feels her research will be helpful to future educators and future school designers looking for information on how to best assist children with ASD. She’s helping to establish an area of research that that she found lacking back when she began the Ty Gwyn design project.

“When you go into research you don’t know what you are going to find,” Irish said. “I had an assumption going in, but I knew that I had to be open to what actually happened when I was there because nobody else had done this research. It turned out that my most interesting discovery was finding out more about the innate abilities of children with ASD and the unique way they saw the world rather than just the way they navigated my wayfinding route.”