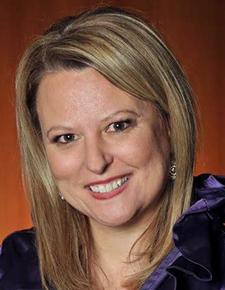 It’s a cliché to describe cancer treatment in warlike terms (“battling” her illness, “fighting” his disease), but most people who’ve faced lengthy treatment regimes or have heard the words, “You have cancer,” understand that there are times when battlefield comparisons feel apt.

A cancer diagnosis, and the months and years of chemotherapy, radiation, surgery and scans that often follow, can leave emotional scars on people who live through the experience, said Kelly Grosklags, a psychotherapist in private practice who specializes in treating individuals undergoing cancer treatment.

Grosklags, who hosts “Conversations With Kelly,” a popular series of public discussions focused on cancer treatment and survival, treats many of her patients for PTSD — and encourages other health care professionals to do the same.

“For the last four or five years I have been saying out loud that having cancer and being treated for cancer is a PTSD experience,” Grosklags said. “When I say that at public events, the audience nods with agreement. It’s a diagnosis that wasn’t acknowledged for years, but more and more people are seeing themselves in this description.”

For much of the last two decades, Judy Erdahl feels she has lived in a state of heightened anxiety.

Since being diagnosed with and treated for the cartilage cancer chondrosarcoma when she was 33, Erdahl understands what it feels like to have part of her sense of well-being taken away. Even though she underwent surgery and successfully pushed the cancer out of her system, a nagging unease lingered.

“Once you’ve had a cancer diagnosis there is always this monkey on your back,” she said.

Then, when Erdahl was 43, she found a lump in her breast that turned out to be stage 1A breast cancer. “It was a very early diagnosis,” she said. “I did a single mastectomy, I had chemo and reconstruction. I figured that was that and I planned to go on with my life. I’m a pretty resilient person.”

At Erdahl’s five-year post-breast-cancer checkup, her doctor ordered a round of routine blood work. Later, Erdahl recalled, “The doctor called me and said, ‘The blood work showed some significant changes.’ It turned out that the breast cancer had spread to my bones.” Even though Erdahl’s cancer was now considered metastatic, there was no obvious sign from the outside. “I was working out, looking healthy feeling great, but it had come back,” she said.

This news threw Erdahl for a loop.

“The way we’re programmed in our society, everything that has to do with breast cancer is pink and pretty,” Erdahl said. “You think you’ll survive five years and everything is going to be OK.”

Once she had joined the ranks of people diagnosed with metastatic breast cancer — something she said eventually happens to some 30 percent of individuals initially diagnosed with breast cancer — Erdahl said her life changed. She learned that the average life expectancy after a diagnosis like hers was 33 months; thanks to ongoing treatment and careful monitoring, she’s lived for 6½ years.

While Erdahl said she’s happy that she’s been able to far outlast predictions of her mortality, she said there are days that her ongoing, lifelong cancer treatment feels like its own unique form of physical and psychological torture.

“People in the metastatic breast cancer community say after we are diagnosed with metastatic, our lives turn into, ‘scan, treat, repeat.”

For Erdahl and others in her situation, the treatments and the constant followup scans create a heightened, almost constant sense of unease.

“In the cancer community, it’s known as ‘scanxiety,” she said. “You have scans every three months. The more of those scans you have, the harder it gets. You know at some point it is going to get worse. You have to deal with the anxiety of having the scans, or waiting for your test result and dealing with whatever the doctor wants you to do as a result of those scans.”

It got to the point that Erdahl started to feel physically ill in anticipation of chemo treatments.

“I would be getting ready to go in for treatment, and before I got there, I’d be feeling nauseated and my heart would start racing,” she said. “I asked the nurse, ‘What is my body doing? I’m going crazy.’ The nurse said, ‘This is a common reaction. Your body anticipates what’s going to happen. You know you are going to feel crappy soon, so your body just starts feeling crappy on its own.’”

One day, Erdahl was at a low point. She’d heard discouraging news from her doctor, and she was feeling jumpy, uneasy and depressed. 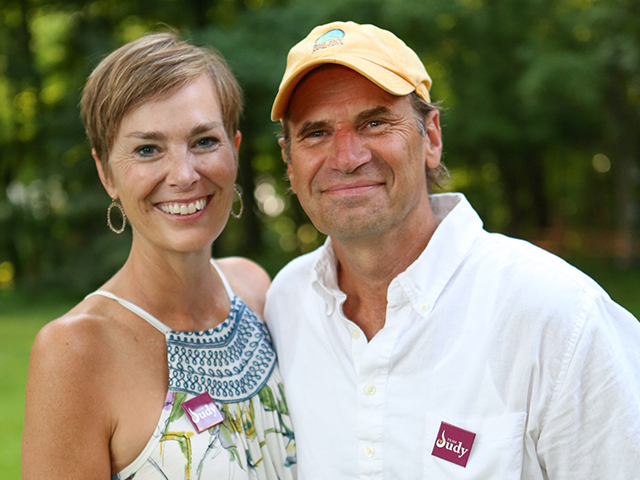 “I remember being in the doctor’s office knowing I had progression on my scan,” Erdahl said. “The nurse practitioner had told me about Kelly before, and at the time I didn’t think I needed it. But then I saw her brochure again, and I thought, ‘It’s time. I need some help.’”

Grosklags, who came to her line of work after surviving the sudden death of her mother when she was just 11 years old, told Erdahl that her reactions were normal. She explained the symptoms of PTSD, and together the two began to develop a course of action to help improve Erdahl’s quality of life.

“Kelly really helped me understand that I wasn’t crazy,” Erdahl said. “What I was going through is a normal response for my body. I thought the idea of PTSD made a lot of sense because it is trauma that you are experiencing over and over and over again. You are always in anxiety.”

Grosklags’ approach to treating PTSD in cancer patients is multipronged. She is not trained in EMDR, a technique that has been shown to be effective in treating PTSD in veterans and others. Instead, her focus is more on talk therapy — with other techniques thrown in.

“I might do clinical hypnosis around introducing techniques of calming, of feeling a little more grounded and in control,” she said. “One of the most powerful things we can do is learning to say out loud what we are experiencing, what we are scared of, and what we are feeling. If we can stop feeling ashamed of what’s going on it is very powerful. People fare better mentally after treatment if they actively address these concerns during treatment.”

And Grosklags is not opposed to using medication to help ease her patients’ psychological symptoms. In those cases, she works with their health care team to prescribe the appropriate drugs.

“Sometimes treating cancer-related PTSD takes a combination of therapies because if anxiety is so prevalent you are not going to be able to focus,” Grosklags said. “You may need medication. It is one of the things that we consider for people.”

When anxiety began to affect Erdahl’s sleep, for instance, Grosklags worked with Erdahl’s health care team to prescribe the anti-anxiety medication Lorazepam. “I take that for anxiety, and it also works for nausea, so sometimes I take it when I’m on chemo,” Erdahl says “I have mild depression, and we’re monitoring that in case it worsens and I need to take something for that.”

“She helps me talk through major decisions,” Erdahl said, “like when I need to write letters to my kids or work on my health care directive. She helped me deal with the anxiety of confronting my own mortality. Because I know she’s had so much experience working with people as they’ve died and helping them live while they are dying, working with Kelly helps me find some peace.”

Grosklags is one of only a small number of providers in Minnesota to specialize in oncology-focused mental health services.

“My main focus is on oncology patients and grief,” Grosklags said. “There are a lot of underserved oncology patients in the mental health area. Not a lot of people want to do this work, and I can only take so many patients. I couldn’t keep up with the referrals.”

Because of this care gap, Grosklags founded Conversations With Kelly.

“It’s a public healing forum where people can come together to talk about these issues. We meet in the Twin Cities four times a year. There are different topics for each one, and they’ve often sold out.” 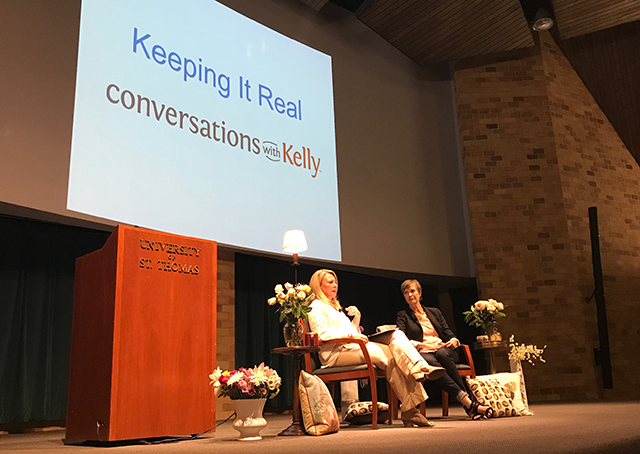 Erdahl has been a presenter at three Conversations With Kelly events. She likes the approach, but wishes there were more providers like Grosklags who could offer individual appointments.

“I joke with her that we should go to the University of Minnesota and recruit the sociology and psychology students,” Erdahl said.

Grosklags believes that if there were more providers willing to focus on the psychological impact of cancer treatment, it could affect long-term outcomes for patients.

“People respond better to their treatments if their mental and emotional health is stabilized,” she said. “Mental health issues can get in the way of people being able to respond well to cancer treatment.”

Since she began working with Grosklags, Erdahl believes that most of the time she is able to put her cancer in its place.

“I like to call myself a ‘realistic optimist,’ ” she said. “This a terminal illness. Unless I get hit by a bus, I know that I am eventually going to die from my cancer. Hopefully that won’t happen for a while. Kelly helps me balance the optimism and the reality. She’s very optimistic. She doesn’t sugar coat things. She also helps me understand that there’s always hope, even if it is just hope for more hope.”

It’s not that Erdahl never lets her cancer or its treatment take over her thoughts.

“The anxiety is real,” she said. “It is very real. I act like I handle it well, and 90 percent of the time I do. But I still wake up at night sometimes having a mini-panic attack.”

But her twice-monthly appointments with Grosklags have helped her find balance, and understanding that the only truly assured time that anyone has is the right now.

“I’ve learned to stay in the present,” Erdahl said. “Looking forward too far is fear and anxiety. Looking too far back is depression and regret. By staying rooted in the present I realize I can handle anything that’s happening right now, even if it is just one breath at a time.”