Most people take at least one kind of medication every day. It’s a part of the fabric of our existence, so much so that we usually take the experience for granted — unless our medications significantly affect our health or alter our behavior.

Paul Ranelli, professor at the University of Minnesota’s College of Pharmacy on the Duluth campus, wants us to take a closer look at the experience of taking medications.

“Medicines are a social object,” he explained. “They are more than what we take to feel better or cure an illness. They are part of our social upbringing. We should pay more attention to what that means.”

For years, Ranelli, who specializes in the field of social pharmacy, had been musing about this nearly universal experience, looking for ways he could encourage others to discuss the meaning of medicines to their lives. An amateur photographer, he had always been interested in telling stories through photos, so he was searching for a way to start this important conversation with images.

“Art is a great way to express your feeling and thoughts,” he said. “I loved the idea of encouraging people to creatively express their experiences and share those creations with others.”

He especially thought it could be helpful to open a conversation between patients and the physicians who prescribe their medications. Too often conversations around medicine are brief and impersonal, he thought. He wanted to encourage frank dialogue on the topic.

“I wanted patients to teach their health professionals about what their medicines mean in their lives,” Ranelli said, “but I wasn’t sure how I could do that.”

It seemed likely that nothing would ever come of Ranelli’s ideas. Then, one day in 2016, he met Jes Reyes, program coordinator at Spectrum ArtWorks, a Minneapolis-based visual arts program that provides studio space and support to artists living with mental illness.

Reyes had brought samples of pieces created by ArtWorks artists to the Minnesota Public Health Association’s annual conference. Ranelli took a look at Reyes’ pop-up show and an idea was born.

“I’d been trying to figure out how to get the visual arts and medicine together,” he said. This seemed like an opportunity. He introduced himself to Reyes. “I said,” Ranelli recalled, “‘I have this great idea and I need a partner.’”

Intrigued, Reyes  asked him for a proposal, and eventually the two settled on the idea of a traveling exhibit titled “To Really See: Exploring the Medication Taking Experience.” Reyes would serve as the exhibit’s curator, and she would open the show up to the public.

Because Ranelli is a photographer, his first idea was that “To Really See” would feature only photovoice works, or photographs depicting the artist’s experience of taking medications. Reyes thought the exhibit should take a more comprehensive approach.

“I encouraged him to think bigger,” she said. “I said that I thought the exhibit should not just be photography. Instead, his idea should be something we could use to frame a full visual-arts exhibition.”

Reyes also wanted to make sure that artwork created by people living with mental illness were included in the exhibition. That was fine with Ranelli.

“I know that mental illness and behavioral meds are a very prominent class of drugs used by people in the United States,” he said. “So it wasn’t a surprise that many of the exhibitors would be people who use medications for emotional or behavioral issues.”

In January 2017, Reyes put out a call for artwork to be included in “To Really See.” She and Ranelli decided that the show should not be juried, so all pieces submitted were included in the final exhibition. 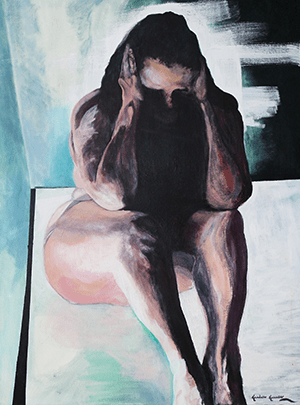 “Me Before Me” by Kandace Krause, acrylic on canvas

“I was very intentional about being inclusive,” Reyes sad. “There is a lot of stigma around medication, and we wanted to make sure that everyone who wanted to take part felt welcome. ”

The pieces that were submitted are a “mixture of fine art and craft,” Reyes said.

“We invited conversation and invited community, and we got that.”

The show will be divided into three sections. “People will be greeted with the photo voice element,” Reyes said. “The middle section is our public component, with works gathered from the call for art. The last portion is work created by Spectrum ArtWorks collective members.”

There are many themes to the exhibit, but one major one, Reyes said, “includes how nuanced the experience of medication taking is. There is a real push and pull. You know that it is important to take your medication, to take good care of yourself.  But there is so much stigma attached to taking medication. The art in this show reflects that.”

Spectrum ArtWorks, which is a program of RESOURCE, has been hosting annual exhibitions since 2004, with the goal of changing attitudes around mental illness. With more than 30 artists participating, “To Really See” is the nonprofit’s largest show ever.

“To Really See” will open in Cargill Hall at Minneapolis Central Library on Aug. 10. There will be an opening reception from 5:30 p.m. to 8 p.m., including a presentation facilitated by NAMI-Minnesota at 6 p.m. held in the David Doty Boardroom on the library’s second floor.

The exhibit will close at the Central Library on Sept. 27 with a panel discussion moderated by Minnesota playwright Syl Jones. Then “To Really See” will travel to St. Luke’s Hospital in Duluth in October, and back to the University of Minnesota in December.

Ranelli will be in Minneapolis on Aug. 10 for the exhibit’s opening festivities. He’s excited to see his dreams become reality.

“The idea is to get health professionals and the people using these medicines to look at them in a different way, other than just talking about them in the office,” he said. “I hope this exhibition will be a way of getting those conversations going.”

Reyes, for her part, is confident that “To Really See” will be the source of many important discussions about what it means to take medication, to pay attention to your mental or physical health, and to be open about the impact that medication has on your life.

“There is a benefit of creating a public narrative around a health experience, especially if there is some shame or fear around it,” Reyes said. “We want to encourage conversations around art. That’s one way that change happens.”