There’s no question that Christi Furnas has a compelling life story. For years, she’s been telling friends and just about anyone else who’s willing to listen about her schizophrenia diagnosis, about her family and friends’ complicated reaction to said diagnosis, her multiple hospitalizations and her long journey to find the right medication to treat her complex symptoms.

It’s a story that many people with severe and persistent mental illness share. But Furnas doesn’t think that enough people talk about the reality of life for people with schizophrenia and other mental illnesses. Because of that, she decided that the time had come for her to share her story with an even larger audience.

“Over and over again,” Furnas said, “I’d tell people these stories about my diagnosis, about things that happened to me. The people I told were always so interested in what I had to say. It felt like each time I told my story it got people talking about the reality of life with mental illness in a positive way. I thought, ‘I’ve got to write this down so more people can hear it.’ But I’m a visual thinker. The most natural way to get this story out there was through imagery.”

An oil painter since she was a teenager, Furnas makes her living as an artist and a peer support specialist at Spectrum ArtWorks (soon to be called Avivo ArtWorks) a Minneapolis-based community support program for professional artists living with mental illness. She decided to use her natural ability to tell stories with pictures and turn her story into a graphic novel.

“I didn’t want to write a boring book about ‘This is how people hear voices,’ ” Furnas said. “I want to connect with people and let them know that they’re not alone. I want to start a real conversation about mental illness. I want to say, ‘This is what’s it is like to have to communicate about your mental illness with friends, family, coworkers and health care providers. This is what my life is like.’ ”

Furnas has always carried a sketchbook wherever she goes, and paging through one a few years back she discovered one character that stuck out.

“One of my little sketches was a fox with little alien spaceships circling in the sky over its head,” Furnas said. “I’d titled it ‘Crazy Like a Fox.’ That’s how I got the title of the book and the character.”

In her book Furnas is Fox. The story is based on her real life, but the characters — all portrayed by comic-book animals — are fictional.

In 2016 Furnas was awarded a Minnesota State Arts Board Artist Initiative Grant to fund the creation her book, which she gave the full title of “Crazy Like a Fox: Adventures in Schizophrenia.” She’s now hard at work on the full-length graphic novel, which already has 17 completed chapters. She’s also produced several “mini-comics” of individual chapters. When the book is completed, Furnas said she will seek publication.

Furnas’ story isn’t typical comic-book fare. It includes her mother’s death when Furnas was 15, her inklings of an emerging mental illness in her later teens, her subsequent ejection from her family home at age 18, moving in with a kindly aunt, time with an abusive boyfriend and a full-on mental breakdown and psychiatric hospitalization in her early 20s. The book starts at the breakdown. Somehow (maybe the characters portrayed as animals? the endearing, “crazy” fox?) Furnas manages to make this harrowing tale readable — and even enjoyable. 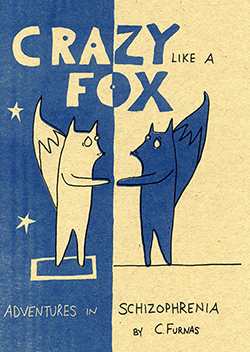 “I want this book to be entertaining, to tell my story, to start conversations, but not in that specific order,” she explained. “Without the ‘entertaining’ and without a story it wouldn’t reach people, it wouldn’t start the conversation. I think those elements are all equal entities. They wouldn’t work without each other.”

That commitment to entertainment means that there were a few parts of Furnas’ real-life story that did not make the cut.

“There are some stories from my life that I couldn’t communicate visually,” she said. “They’re just not funny. I tried, but even in a dark, twisted way, they didn’t seem appropriate in my book.”

Even decades later, Furnas’ toughest life experiences still feel raw. “I couldn’t develop a set of goofy-looking characters who could represent the security guards that fourpointed me at HCMC,” she said.  “There was nothing funny about it. When I was breaking down, they tied me facedown to a cot. A lot of people have gone through this, I know. I want to be able to talk about it, and I do talk about it, but drawing it was too much.”

Furnas works out of a bright, inviting studio space in northeast Minneapolis’ Solar Arts building. Her shared studio is packed full of her colorful oil paintings. One stretch of wall near a drawing table is covered with sketches from “Crazy Like a Fox.”

Part of Furnas’ process of creating the book has been to show her drafts to friends, and to her graphic-novel mentor Tom Kaczynski, publisher of Minneapolis’ Uncivilized Books.  “It’s really exciting working with Tom,” she said. “It’s been wonderful.”

Furnas takes in her readers’ reaction to her drafts and makes changes where it feels important. She wants this to be a book that people actually want to read.

“When people have read through a lot of the chapter drafts they’ll say, ‘That’s intense, I’m really glad you used humor and I’m glad that you have playful characters or it would be too much,’ ” Furnas said.

The mini-comics are another way she’s tested the waters of her mental-health-story-as-graphic-novel format.

“I’ve had such a good response just with the mini-comics,” Furnas said. A good example: “One woman came to my open studio. She was flipping through the mini-comic. She asked, ‘Is this you?’ I said, ‘Yes,’ and she started crying and said, ‘My aunt was diagnosed at a young age. You’re doing really well.’ ”

Doing really well takes a lot of work. Furnas needs to pay close, constant attention to her mental state. She’s happily married and in a good place now, but she knows that she needs the support of her wife, her close friends and her medical team to keep herself psychologically healthy.

“Name a symptom,” Furnas said. “I’ve had it. Most of my hallucinations are auditory. If I am in a bad mood or I’m scared or paranoid the voices become commanding. But for the most part now they’re just chatter. They can still get bad sometimes. I also have feelings like bugs crawling on me. I have really bad depression, which is managed by meds. If it weren’t for finding the right med combination, I would not have my job, I would not be here.”

Furnas is so excited about the power of this new art form to communicate important stories like hers that she recently started teaching a comic class for artists with mental illness at Spectrum ArtWorks.

“It’s a popular class,” she said. “Everyone there wants to tell their story, or a version of their story. I think it’s really exciting. It’s about time that people start talking about their experience with mental illness. Comics are just a way to do it on a lighter note.”

On Sept. 29-30, Furnas will debut some of “Crazy Like a Fox: Adventures in Schizophrenia” at the 13th-annual Twin Cities Zine Fest at Minnesota Center for Book Arts, 1011 Washington Ave. S., Minneapolis. She will do a reading from one of the min-comics on opening night at 7 p.m. on Sept. 29 and host a booth at the festival from 11 a.m. to 5 p.m. on Sept. 30.