When the children and their families showed up for a special preview open house last Saturday, Katie Lindenfelser felt that her dream of creating Crescent Cove, Minnesota’s first freestanding pediatric hospice, was finally coming true.

“It was such a moving experience to see the kids’ wheelchairs lining up outside,” she said, “to see them coming through the door with their siblings, moving around and just checking the place out.”

While Crescent Cove has been offering in-home support and respite care for families of children diagnosed with life-limiting illness since 2009, Lindenfelser’s goal had always been to open and operate a stand-alone facility where families could bring their seriously ill children for overnight respite care, or as a full-service hospice facility for children who are actively dying.

Lindenfelser, Crescent Cove’s founder and executive director, first saw a pediatric hospice home in action when she lived in Australia and worked for Very Special Kids, a full-service pediatric hospice in Victoria. Years later, when she returned to her home state of Minnesota, she was determined to create a similar program for children and families here.

In March 2016, Lindenfelser got one step closer to her goal when Crescent Cove signed a purchase agreement for the former North Memorial hospice home on Twin Lakes in Brooklyn Center. With the agreement signed, she and her team of volunteers and two paid staff set to the task of reading the facility to welcome children and families. The home’s opening date was originally set for October 2017; unforeseen remodeling challenges set the project back a month.

Last weekend’s family event was the kickoff for a week of grand-opening celebrations for the Crescent Cove facility, which will officially welcome its first children in January.

“There are six rooms for children at the home,” Lindenfelser said. “We’ll be opening step by step, in stages. We’ll be staffed with one nurse and one CNA by January. We’ll be able to welcome one to three children at a time on an acuity basis. We will expand over time.”  The goal, Lindenfelser said, is to be fully staffed by the end of 2018, with enough nurses to care for up to six children at one time.

At the open house, children and families toured the home, which has been remodeled to add bedroom space and treatment rooms. A new HVAC system was installed, and the home was fitted with a new electrical system, flooring, countertops and a fresh coat of paint.

Though Crescent Cove staff is still compiling final budget numbers, Lindenfelser reported that the project is projected to come in under budget.

“There was so much generosity from the community,” she said, “We anticipated a certain amount of budget for new flooring, for instance, but then one of the neighbors of the hospice owns a flooring company. They made a major donation. Three different electrician groups came together to donate labor. We had donated appliances and donated lighting and donated construction work.”

While structural improvements are key, the children at the open house were far more interested in the home’s other features, Lindenfelser said.

“We have this amazing art feature on the wall,” she explained. “It is a multisensory work of art with dragonflies in a peaceful place and a crescent moon that lights up. The kids loved it. To see them interact in the space, pulling books off the bookshelves and toys off the shelves and getting their faces painted — it was such a joyful, exciting time.”

Families were also greeted by Twins first baseman Joe Mauer, TC Bear and by a crew of pro wrestlers.

“The kids loved it,” Lindenfelser said. “It was great to see them in the middle, interacting, laughing, smiling. It was so much fun for them.”

Home away from home

Caring for a child with a life-limiting illness is emotionally, physically and financially exhausting. The in-home services offered by Crescent Cove help ease the burden for families by providing staff and volunteers willing to come to the home and give parents a much-needed break.

Lindenfelser said that the freestanding hospice home provides further respite, offering a safe place where high-needs children can stay overnight with or without their parents, and a peaceful, quiet place for families, who, for any number of reasons, prefer that their child not die at home. Crescent Cove nursing staff will be trained in hospice care and in the care of children with complex medical needs.

“Most of the time families will be leaving their child with us so they can get some respite,” Lindenfelser said. “Some of the time they might come just because they want a place to stay where they are taken care of. And some families might specifically come here when their child is actively in the dying process.”

Running such a program is expensive. At first Lindenfelser hoped that Crescent Cove would be able to offer all services free of charge to families with full donor support. Pediatric hospices in Canada operate that way, she said, with the support of National Hockey League teams.

“The need for financial support from donors is immense. The largest expense of the model is paying for the 24-7 nursing care for the kids.”

So far, Lindenfelser reported, Crescent Cove has received generous donations from the Minnesota Twins, the Minnesota Wild and the Timberwolves, but it hasn’t been enough to cover all program expenses.

“We feel so grateful for the donor support we’ve received so far,” she said, “but we do hope there will be more support from sports teams. We are relying first and foremost on the generosity of donors in the community.” 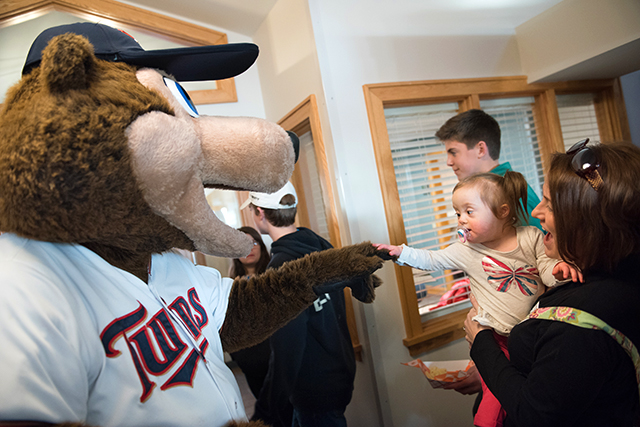 Crescent Cove’s donor-dependent model is still in place, and families will never be charged for services, but Lindenefelser explained that staff is now working with the Minnesota Department of Human Services to establish a funding mechanism for families through Medicaid waivers.

“DHS has sent an amendment to the Centers for Medicare and Medicaid Services with the request that the facility be added to these waivers,” she said. “We have 90 days to hear back. We’re trying to move ahead with the funds from donors while simultaneously building a reimbursement model. We’re trying to work with insurers to figure out how it works. It is hard to create a plan for something that hasn’t existed.”

In the midst of this process, the opening celebrations are moving forward. On Thursday, Nov. 16, at 10 a.m., there will be an official ribbon-cutting ceremony at the hospice home, 4201 58th Ave. N., Brooklyn Center. The event is open to the public. Local politicians will attend, as will multifaith leaders. Singer-songwriter Emily Albert-Stauning will perform “Don’t Worry,” a song she wrote to honor the children and caregivers of Crescent Cove.

“This is such an exciting time for everyone involved,” Lindenfelser said. “Kids in our state who face life-limiting illnesses will now have a place to come for the highest quality of life possible in the time they have, and their families will have a safe place for respite from the heavy demands of caregiving. This couldn’t have happened without the support of hundreds of donors and volunteers. It’s an amazing accomplishment. It’s hard to believe that it’s finally happening.”