Aging can be a depressing and isolating experience — but lately the mood seems to be shifting for a group of residents at senior living provider Ebenezer Minneapolis. They’ve been off on a series of adventures, floating down the Mississippi River, walking in the Northwoods, roaming around Stonehenge and standing center stage at a concert — all without ever leaving their building.

The group took part in a study sponsored by Ebenezer and Minneapolis virtual reality startup Visual where they donned headsets and traveled to places both familiar and exotic. The goal of the study was to measure virtual reality’s impact on the seniors’ emotional well-being. So far the results are encouraging.

“We know that growing old can be a difficult experience,” said Christine Mangold, Ebenezer Minneapolis’ lifelong learning program coordinator. Some of those feelings may be due to seniors’ lack of mobility, she added: “For many people, as they age it gets harder to go places. This can create feelings of depression and isolation.”

Mangold spends her days with Ebenezer residents, and a common conversation theme is a sense of frustration and sadness over their inability to get out and explore the world the way they did when they were younger.

“The residents were studying a poem and they were trying to wrap their heads around the image of a path in the woods,” she said. “So I pulled out an iPad and Googled ‘path in the woods,’ and a picture came up.”

The image was beautiful, but to the residents it felt static — and even a little depressing.

While they enjoyed the image, Mangold said, “They said it was just a picture and they doubted that they’d ever be able to actually walk on a path like that again. All of the sudden I had this goal in mind: to find something that could somehow help them go there again.”

Mangold started researching options and soon decided that virtual reality was one way that Ebenezer residents could experience the world from the comfort and safety of their homes. She talked about her idea with Joel Prevost, Ebenezer Minneapolis campus administrator. Prevost supported it from the start.

“I love technology and gadgets that can be used for solving problems and enhancing life,” he said. “And I’m always looking for ways to use technology to improve seniors’ lives.”

Though Prevost supported the virtual reality idea in concept, the pair felt challenged to come up with a way to make it work. Then Mangold heard about an event that was being held nearby at the American Swedish Institute.

“The Institute was working with a company that was demo-ing their virtual reality content on headsets there,” Prevost recalled. “Chris went to the event, tried it out, and she came back and said, ‘This is exactly what were talking about.’ ”

“It was kind of like it was meant to be,” Mangold said.

The Swedish Institute event partner was Visual, and Ebenezer soon reached out to the company with their idea. Chuck Olsen, Visual cofounder and CEO, said he was excited by the opportunity to try out his company’s wellness platform on a group of seniors itching for adventure. It was perfect timing.

Prevost said his goal for the virtual reality project was to provide an experience that actually improved the quality of his residents’ lives. It needed to be more than a one-time diversion.

“I didn’t want the residents to come away just saying something like, ‘I enjoyed it,’ or ‘It was nice,’” Prevost said.  “I wanted them to feel like the experience was bigger, that it had a positive impact on their lives.”

Olsen explained that he was hoping this partnership could help prove that his company could produce more than games. “Our tagline is, ‘Virtual reality for a better reality,’ ” he said. “We don’t see virtual reality as something passive to veg out to, but rather as something to make your real life better.”

The group agreed that the project should morph into a research study, so they could determine if virtual reality made a real difference for seniors. Ebenezer Foundation donors funded the project.

“The actual pilot study was designed to track feelings of relaxation and reduction of anxiety,” Mangold said. “We wanted to see what we could accomplish for residents’ mental health with virtual reality content.”

Convincing a group of seniors to experiment with new technology wasn’t difficult. With the help of building managers, Mangold and Prevost organized a series of meetings about the project across the Ebenezer Minneapolis campus. At those meetings, they talked about the goals of the study, what virtual reality is and how it works.

“Chris went out and got a View-Master and we used that as our prop,” Prevost explained. “We’d get it out and say, ‘How many of you remember this?’ We explained that virtual reality is like a View-Master on steroids.”

Study participants — 25 residents required to be English-speaking, independent, cognitively intact and visually acute — had to commit to two virtual reality experiences per week. Each experience would last up to 10 minutes, and participants would be surveyed weekly about their experiences. The study lasted four weeks. 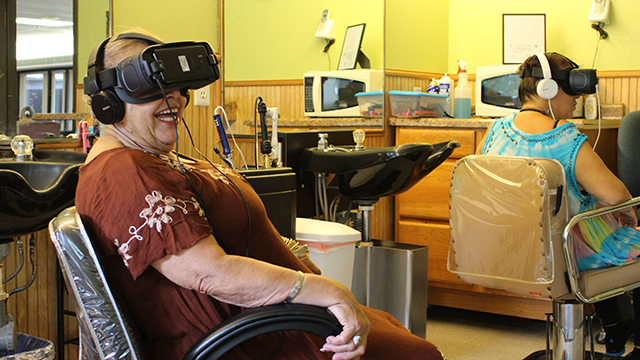 The virtual reality content was designed to be soothing, and not overwhelming, Mangold explained. The idea was to take seniors to places that might be familiar to some, but have a universal feeling of wonder and peace for all participants.

“We started off with a menu of four options, then our partners added more video content each week,” she said. “The first options included Minnehaha Falls in Minneapolis. There was also a boat ride down the Mississippi River, and we had one that was filmed inside the aquarium at Mall of America.”

Participants sat in swivel chairs in the Ebenezer beauty shop for the virtual reality sessions. That way they could swivel 360 degrees to follow what they saw through their headsets without having to stand up.

At the end of the sessions, researchers took note of participants’ reactions to the technology.

“We have an Excel spreadsheet of everything that everybody said,” Mangold said. “For instance, participants often talked about how immersed they were in the experience. One said, ‘I’m at the beach. It’s beautiful. I don’t want to leave.’ ”

The results are in

The pilot study [PDF] found that virtual reality exposure helped participants maintain a high level of positive emotion and relaxation. In post-exposure assessment, participants reported that their experience was overwhelmingly good, with 100 percent saying they enjoyed the experience. The majority reported that virtual reality had a positive impact on their mental health, with 96 percent saying it helped them feel happier, 97 percent felt more relaxed, 98 percent more positive and 94 percent less worried.

“The study found that the virtual reality experience was very calming,” Mangold said. “The word, ‘relaxing’ came from so many of the people who experienced it. They said they felt less stress, like their day was going to be better.”

The positive impact of the virtual experience seemed to be immediate — and lasting, Mangold said. “Residents would leave the room after their 10 minutes, and they’d say things like, ‘That made my day,’ or ‘I’ll feel better all day after doing this.’ They’d all left with a smile on their face. It lessened their anxiety and made them feel more confident.”

Can virtual reality really be a replacement for getting out and exploring the world? That’s not clear, Prevost said, but he does believe that it is a good option for those whose disabilities make it hard to go far. It’s especially a good option for low-income seniors, who tend to have fewer opportunities for real-life adventure.

“We have 600 seniors on this campus,” Prevost said. “They are low-income, highly diverse. Most of this population is very unlikely to get access to this kind of technology and experiences in any other way. In fact, very few people in the country have access to it: This is still new technology. Seniors are not usually the first customers for these kinds of cutting-edge things, so we’re really excited that the opportunity was presented to us.”

Now that the pilot study is completed, virtual reality is available to all Ebenezer Minneapolis residents, Mangold said. Right now the technology isn’t available for multiple participants to experience the same video at once, but organizers have come up with a way to work around that limitation.

For now, Mangold said, the plan is to form “virtual reality clubs. They’ll be kind of like a book club.” First, residents will don headsets and try out the virtual reality videos. Then, she said, “we’ll structure the discussion around people sharing their experiences and talking about what they saw. It will be like a travel club, just a slightly different kind.”