Legend has it that Samson’s hair was the secret to his strength. When Delilah cut it off, he became weak and incapable of fighting his enemies.

Members at Vail Place, a Twin Cities-based clubhouse for people with serious and persistent mental illness (SPMI) are gambling that “Shaving Grace,” a fundraiser they’ve planned to follow their annual show this week at the History Theatre, will have the opposite effect: They hope that by shearing off their beards and long hair, they will gain strength, raising enough money to meet a matching grant from the Wasie Foundation to support the nonprofit’s vital arts programming. The fundraiser’s goal is $5,000.

The idea for “Shaving Grace” grew out of some good-natured teasing.

“I’d been poking at Richard about shaving his beard off,” Bolstrom recalled. “I’d say, ‘I’d be curious to see what your face looks like.’ ”

Whitman fired back at Bolstrom, who’s worn his hair long since 2005, and favors a braided ponytail that reaches down the middle of his back.

“Shaving Grace” “started as a thing between Chad and myself,” Whitman said. “He kept saying, ‘You should shave off your beard.’ I said, ‘Maybe you should cut off your ponytail.’ ”

The debate continued each time Whitman and Bolstrom ran into each other at the clubhouse, which was nearly every day. Other staff and members eventually got into the action.

“Somehow it grew into a shave-off and a cut-off,” Whitman said. “We started talking about it, saying, ‘Maybe we should do it for money.’ Other people said they’d do it, too. I said I’d be OK with that, and it took off from there.”

Once the “cut it off” movement started to gain ground there was no going back.

“The organization got hold of it,” Bolstrom said. “People in the community started rallying around and wanting to make it happen.”

With the support from so many of their long-haired compatriots, and with financial encouragement from friends and family members who’d been hoping to see their loved ones cleaned up for years, the growing group decided that the best time for the mass shearing would be after Vail’s annual performance at the History Theatre.

A clubhouse member with barbering experience — and a handy set of trimming tools — offered to take on the roll of Delilah, taking charge of the mass hair removal.

Suddenly, “Shaving Grace,” while still lighthearted, was starting to feel significant — and cathartic. The people who stepped forward to have their hair removed were doing it to show their support for Vail Place and the people it nurtures. Donors of the monetary variety felt like they were backing something important.

And the long-haired folks? Anything for a good cause.

“I like my beard,” said Whitman, who lives with paranoid schizophrenia and will be performing two original pieces at the History Theatre show. “I can’t think of another charity or group that I would do this for. Vail Place has done so much for me. So I can do this for them.”

Power of the arts

Now in its fourth year, Vail Place’s History Theatre performance features monologues, songs, poetry and dance by clubhouse members, who work for months to fine-tune their pieces and build up the courage needed to present them on stage. The event, and the preparation leading up to it, have become a central focus for many Vail members, an opportunity to help others understand more about the struggles that come from living with SPMI. It’s hard work, but it’s also healing. 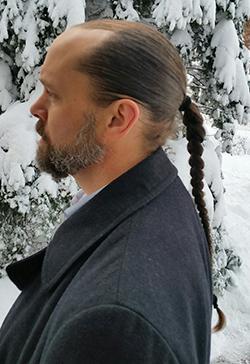 The show’s positive impact on Vail Place members is an example of the power of the arts for treating mental illness, Bolstrom said.

“For a lot of our performers, sharing their stories at the History Theatre is very baring — and very healing,” he said. “They’re opening themselves up in so many ways.”

The self-imposed vulnerability of the members who volunteer to step on stage has parallels with cutting off all that hair, Bolstrom added: “As we started to talk more about tying the shaving and haircutting to the History Theatre performance, it started to seem really appropriate: When we cut off our hair, we are baring ourselves, just like the performers are during the show.”

Even though the metro area offers a number of strong options for arts programming designed for people with SPMI, it still is not enough to reach everyone who could benefit, Bolsturm said. Despite a growing awareness of mental illness and its impact on the community, funding for programs like his remains meager.

“For adults with serious and persistent mental illness, there is a shortage of services and a shortage of communities like ours,” Bolstrom said, adding that 50 percent of their funding comes from individual donations. “Vail is a great community, but the reality is it’s just a drop in the bucket. There are thousands of people with serious and persistent mental illness in the Twin Cities that don’t have access to a clubhouse like ours.”

Many people have formed a strong sentimental attachment to their hair. Cutting off locks that took years to grow can be traumatic, or, in some cases, freeing.

Many of the “Shaving Grace” volunteers are closely associated with their hair. People know them for their mops, so lopping them off has the potential to create an identity crisis.

“I’ve worked in mental health for about 10 years,” Bolstrom said. “At some point I affectionately started to be referred to as, ‘that guy with the ponytail.’ Eventually that became how people identified me.” But “Shaving Grace” has him feeling emboldened: He’s even suggested that for the right price, he’ll have his head shaved bald.

The move feels invigorating in more way than one.

“I have to admit that as we were talking about the timing of this there was a part of me that had a little concern, especially since I just came back from ice fishing, where I was appreciative of having a lot of hair on my head. I think it will feel chilly at first, but we’re all relatively hardy Minnesotans. We’ll figure it out.”

Clubhouse member Kevin Fillips has had a long, red beard for a couple of years.

“It started off as mutton chops,” he explained. “I was doing volunteer work at a historic village. Later I let the chin grow out.”

Fillips, who has bipolar disorder, admitted that he has been thinking about shaving off his beard for several months, but could never decide on the right time. “Shaving Grace” made this big decision easy.

“I would’ve agonized over when to do it had I not had this date coming up,” he said. Now that the big day is close, he said, “I have no regrets. I’ve been ready to get rid of my beard since Christmas.”

While his friends and family members support the beard removal, Fillips predicts that the transformation it may take some getting used to.

“When the beard is gone,” he said, “no one is going to recognize me. I work as substitute in the school district as a paraprofessional. They’ve only known me there as the guy with the big red beard. Suddenly I’ll be the guy with the baby face.”

Sporting a baby face seems a small price to pay to Fillips, who credits Vail Place with turning his life around after his diagnosis.

“I really like that it’s a place I can go to that keeps me busy and I feel like I’m accomplishing something. It’s really easy to talk about your mental illness here without people judging or having any stigma or anything. It’s nice to have a place where I can say, ‘I’m having an episode,’ and not have anyone bat an eyelash.”

Some good could also come out of the donations. Bolstrom said he’s planning on donating his ponytail to a charity that collects hair to make wigs for people who have lost their hair to cancer treatment or other illnesses.

Other clippings will likely be thrown in the trash. “I don’t think there are alternative plans for the beard hair,” Bolstrom said with a laugh.

It doesn’t matter that society deems beard hair as worthless — “Shaving Grace” participants know better. They are looking forward to the experience and excited about the serious group bonding it inspires.

“Nobody’s shedding any tears,” Bolstrom said. “I don’t think this will be a traumatic experience for anyone. We will all step up in our full grandeur, and leave with our heads held high.”