It’s an elegy of sorts — or maybe a eulogy. Or perhaps it’s just one woman’s complicated way of saying goodbye.

For a few years, Alison Bergblom Johnson relied on personals ads in Craigslist as a way to meet men for anonymous sexual hookups. These encounters usually happened when Johnson, a multimedia artist with bipolar I disorder, was in a manic phase.

When she is manic, Johnson experiences hypersexuality, or a dysfunctional preoccupation with sexual fantasy combined with the obsessive pursuit of casual or non-intimate sex. Craigslist was an easy way for her to meet sexual partners.

Johnson’s bipolar symptoms have been quiet for the last few years, thanks to her commitment to taking her medications and monitoring her mental health, so she hasn’t turned to Craigslist for a long time. Still, she always liked the idea that the resource was there, just in case. Then just last month, Congress passed the Fight Online Sex Trafficking Act (FOSTA) and the Stop Enabling Sex Traffickers Act (SESTA). In response, Craigslist shut down its personals pages.

It had been so long since Johnson had been manic that she didn’t hear about the Craigslist change until a friend told her. “That tells you a little bit about where I am mentally now,” she said, laughing. A part of her even believes that the fact that Craigslist personals are dead could have a positive effect on her mental health: “That piece of moving away is a very good thing for me mentally. But I have to admit it isn’t easy for me to say goodbye.”

Because parting with the personals is its own brand of sweet sorrow, Johnson responded the only way she knew how: She made art.

Next month, during the Art-A-Whirl studio crawl in northeast Minneapolis, the public is invited to Johnson’s studio at the A-Mill Artist Lofts to view “A Memorial for Craigslist,” an installation and participatory space she created to memorialize the site’s now-defunct personals, and to discuss connections between mental illness, gender roles and sexuality. The installation will also help Johnson develop material for a new performance piece she is working on for September 2018.

“This is my ode to Craigslist,” Johnson explained. “Memorial” will feature three audio installations, recordings she made of herself telling stories about men she met on Craigslist, as well as pamphlets, artist’s books, and photos.

The stories are intensely personal — and sometimes painful — but Johnson said she felt compelled to tell them.

“These stories lived in my head until they became things I could tell,” she said. “My first impulse was to not tell them. But as an artist, when I hear myself say, ‘I don’t want to talk about this,’ then my impulse is to go, ‘Oh. That must be very loaded and interesting.’ That kind of led me into wanting to talk about it on a larger scale.”

It’s not that Johnson is an asexual being when her bipolar is under control, but when she enters a manic phase, seeking out sexual pleasure suddenly becomes the singular focus of her life. She didn’t always understand this about herself; hypersexual behavior accompanied Johnson’s first full-blown manic episode in her late 20s, but after starting a combination of mood stabilizers, she’d almost forgotten about it. Then, when tapering off a drug she thought was prescribed for anxiety sent her headfirst into full-on mania (and a dizzying round of anonymous sexual encounters), she understood that her sexual behaviors and her mental illness were intertwined.

“I’m a responsible person and I never would’ve started down this path of going off the meds if I had realized that it had that dimension of hypersexuality associated with it,” Johnson said. “It was really hard to get under control once it started.”

Hypersexuality is a common symptom of mania in bipolar disorder, said Kaz Nelson, assistant professor and vice chair for education in the Department of Psychiatry at the University of Minnesota Medical School.

“With bipolar I, the manias are this full mania, where you might have psychotic symptoms, including fixed false beliefs, usually of a grandiose nature,” Nelson said. “You can think things like you are a deity and only you can save the world, or you are going to start the next Google. This state is the opposite of depression. You are drawn to everything that’s related with euphoria or feeling good. One of those things for many people is sex. When you are manic, you may feel more empowered or less inhibited. You may take more risks or experience sex as being more pleasurable than ever before.”

As her mania intensified, Johnson discovered that Craigslist was a perfect place for her to find willing sexual partners. “It’s a textual medium,” said Johnson, who has a day job as an editor and writer, “so being able to write well is a distinct advantage. And you also can see the people who can write well.”

Johnson continued down this road, hooking up with a series of partners, until she felt that her life was spinning out of control. While most of the men she met during this phase felt safe and respectful, she began to fear for her own safety and well-being after being violently assaulted by a man she met on the site.

“That was a turning point,” she recalled. “It was a hard time. I realized I’d gone way too far. In normal day-to-day life, say if a boyfriend had done what he did to me, we would’ve been talking to the police.” But because the assault began as a manic hookup, Johnson felt uneasy about reporting it to authorities. A few days later, when she eventually checked herself into the hospital for psychiatric treatment, Johnson refused a sexual assault exam.

“I feared I was going to be judged really badly and possibly even in ways that were substantive in matter,” she said. “What if someone at the hospital heard my story and said, ‘You aren’t able to stop doing these hookups. Why are you living alone? Why not live in a group home?’” She sighed. It clearly still hurt to talk about the incident. “I thought, ‘This isn’t worth it to risk my freedom,’ but it is something that still haunts me.”

Nelson, who calls bipolar swings “seizures of the brain,” and often compares them to epileptic seizures (psychiatrists even use anti-seizure medication to treat bipolar), explained that what happened to Johnson has happened to many others with the disorder. Mania clouds judgment, and understandable fear of discrimination can mean that people don’t always get the help they need.

“It’s not uncommon for people in a manic state to engage in sexual relationships that after the period of mania subsides may make them feel disgusted, shameful or violated,” Nelson said. “But when you are in that state you don’t always make good decisions and can end up in dangerous situations because your judgment is altered by your brain activity. This is a real risk for people with bipolar, and we don’t talk about it often enough.”

With “Memorial,” Johnson set out to create a piece that takes visitors inside one small corner of her powerful brain. The installation is structured carefully, with, she explained, “little private spaces to listen to audio-recorded stories.”

The recordings are an extension of some pieces that Johnson’s performed around the Twin Cities over the last few years, before the personals were shut down, including “An Open Letter to the Men of Craigslist,” that she presented at Patrick’s Cabaret.

Each story describes a different hookup. “They all have some awkwardness to them,” Johnson said. “It’s all about exploring these gender roles and difficulties. All of the objects in the installation are carefully curated and referenced and play off of details in the stories.” 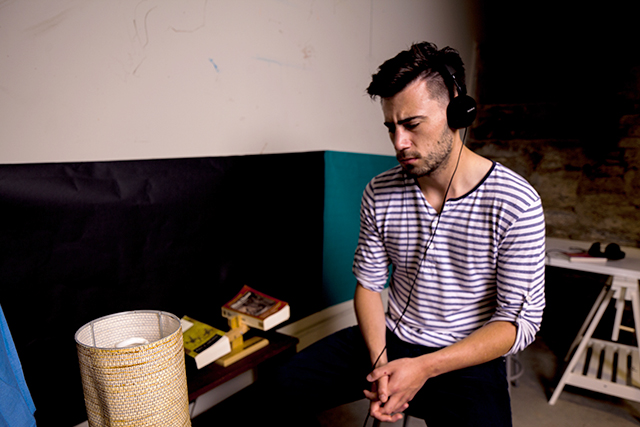 Photo by Brandon Han
A visitor listening to one of the recorded stories that are part of “Memorial.”

Telling these stories is more than exhibitionism, Johnson insisted. It’s also about creating a culture of openness and honesty around mental illness and sexuality, something she thinks is important for the world to see.

The experience of hypersexuality is more common than people would like to admit, Johnson added. She believes that many people get themselves into dangerous situations when mania takes over their lives. When she performs her monologues, she often meets people who want to talk about similar experiences.

“People tend to come to me,” Johnson said. “They say, ‘You do art around this. Let’s talk about the substance. I have a story to tell you.’ It ranges from an audience member saying, ‘I understand my father so much better now that I saw you perform,’ to, ‘I’ve been doing hookups for years and we really need to talk.’ ”

In control and creative

Johnson understands why some people with bipolar disorder — especially artists — resist taking mood-stabilizing medications (“The creative highs are so intense and pleasurable,” she said), but she also accepts the reality that the medications will be part of her life for the rest of her life.

“It’s what I have to do,” she said. “It’s how I stay healthy, but it isn’t always exactly my favorite thing.”

“Particularly for artists or anybody that’s on the way up, mania feels awesome. By its very definition it feels really good. Artists or even businesspeople feel like they can be very productive and dynamic during these periods. The sad truth is they while they might get good work out of their mania for a segment of time, there are also serious consequences associated with those states that are generally regrettable or even life-threatening.”

Johnson understands that perspective, but lately she has been working with her health care team to adjust her medications to see if she can find space for more intense emotion.

“I haven’t had a major manic episode in two years,” Johnson said. “It’s pretty under control — about as under control as I’ve been in the last 10 years. I recently changed a medication under the supervision of my providers. It’s exciting because I can see myself being able to emote more and be in the world in a different way. I don’t resent that I ever went on these medications. I know I had to. But they’re pretty heavy duty and I’m only now realizing how much of me they was tamping down.”

Living a good life with bipolar requires constant monitoring and partnership with a supportive health care team, Nelson said. But it can be done.

“It takes a lot of hard work and trial and error to develop a strategy where you can achieve that goal. These meds are heavy-duty. We don’t want people on them to feel tired and sluggish or to gain weight: We are not satisfied with those outcomes. We want people to achieve healthy living and good health with some healthy mood variation.”

“It’s part of who I am, but it’s not everything I am,” she said. “I have been creating stories for a very long time. People need to hear them, because they are full of important truth.”