Less than a year ago, Paige Banks was locked in the mental health and addiction services unit of a local hospital when she learned that she was pregnant with her second child. The 27-year-old was struggling with a relentless addiction to alcohol and methamphetamines, and she had no idea what she was going to do next: She had no home of her own, seriously strained connections to family and friends, and, in less than 9 months, a new baby would be coming into the world.

To be discharged from the unit, Banks needed to find an inpatient addiction treatment program that would take her, and, eventually, her child. She had lost custody of her oldest son to his paternal grandmother, but Banks wanted to keep this baby — and eventually regain custody of his older brother. So she signed up for Avivo, the only residential addiction treatment program in Minnesota that accepts mothers and their children ages 0-17. This meant that if she successfully completed Avivo’s 90-day residential treatment program, Banks would have a home to call her own — one of the many recovery apartments that the nonprofit operates around the Twin Cites. And when Bank’s baby was born, he’d have a stable place to come home to.

A few days ago, Banks, now just weeks away from her due date and a successful graduate of Avivo’s residential recovery program, moved into her new home — a freshly remodeled one-bedroom apartment in an Avivo-owned 8-plex on Park Avenue in Minneapolis.

Having a home to call her own feels like a big step for Banks, and the apartment, extensively rehabbed by a crew of volunteer remodelers organized by the Builders’ Association of the Twin Cities’ (BATC) Housing First MN Foundation, feels better than anything she could’ve imagined.

“When I saw the apartment,” Banks said, “At first I thought, ‘This is where I get to live if I stay clean and sober? It is so amazing.’ ”

Before they were remodeled, the Park Avenue apartments, which the nonprofit has owned since 2007, were safe and clean, but the interior had seen better days, said Kelly Matter, Avivo president and CEO.

“It’s a 102-year-old building that has good bones, but the apartments were outdated,” she said. “The bathrooms were in bad shape, and the faces of the kitchen cabinets were falling off. There had been a lot of traffic in the building: Forty women and their families live in these apartments every year. It is an old property. We’ve done our best to keep it clean, but we haven’t been able to afford to do the rehab.”

Avivo believes that mothers facing addiction have better recovery rates when they are able to keep their family together. Separation can be a trauma for everyone, Matter said. Keeping a family intact, even when one member is going through an addiction-treatment program, has long-term benefits.

“The family recovers together,” Matter said. Providing a place where families can live while mothers are focusing on overcoming addiction is key: “Most of the women we serve have not had a home to call their own. They’ve experienced unimaginable trauma. They are working really hard to change their lives, to recover and to be really good moms. The ability to do that hard work while living in safe, respectful housing really sets a foundation. It raises the bar for our program participants, and gives them a set of expectations for when they leave us.”

It takes serious effort to get to the outpatient recovery apartments, Matter said. “The women in this program have put in the work to get to this point.” Fresh out of residential treatment, they are at vulnerable place in their recovery, and these apartments — and the support that the program provides — can help them get a foothold in the outside world.

“So many of our clients were homeless when they got our services,” Matter said, explaining that most participants stay in Avivo’s housing program between nine months and a year. “Their ability to recover without safe and affordable housing can be limited. Having a place to call their own builds stability for women and their children. And when their time here is coming to a close, we also assist them in getting long-term housing.”

A matter of respect

When BATC-Housing First approached Avivo with the rehab offer, Matter said that she was overjoyed. While the apartments were in respectable shape, having them spruced up and modernized helps to create a feeling of respect for participants, a concept that Avivo likes to emphasize in their programs.

“These are nice apartments,” Matter said. “They’re not the Taj Mahal, but they are beautiful. The women who live here will get the message that they can and do deserve a nice place to live. Building that feeling of self-worth is an important part of the recovery process.” 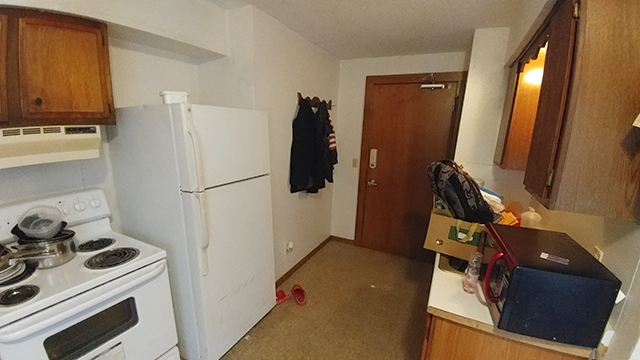 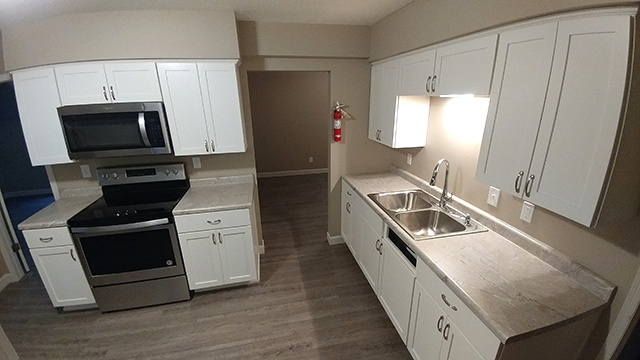 Courtesy of Avivo
Top picture is a “before” shot of the apartment’s kitchen. Below: an “after” shot of the kitchen.

So far, four of the building’s eight apartments have been remodeled. Most of the labor and materials for the rehab, which cost $138,000, was donated by BATC members. Avivo paid just 20 percent of the project’s cost.

“They came out, measured the units, redrew them to be more efficient and identified the cost of the renovation,” Matter said. BATC recruited build partners to fix up these units, including The Kingdom Builders and Crystal Kitchen + Bath. Even the floors were replaced, thanks to a donation by BATC member Richard Berg, owner of Contract Interiors, Inc.  The BATC-Housing First MN Foundation is contacting build partners to take on the building’s second floor. The project should be completed this year.

“Members of BATC were just so generous,” Matter said. “They got so many product donations and did such wonderful work.”

Banks said that the support she’s seen from Avivo has helped her get her life going in a healthier direction.

“I honestly don’t know where I would be if I didn’t have the support I have here,” she said. “I literally don’t have anywhere else to go. So I’m truly grateful for his housing and this program.”

If she had signed up for a traditional recovery program, one that doesn’t factor in the unique needs of mothers and their children, Banks said she thinks she would be back where she was just a few months ago. “I probably would’ve ended up using again and losing the baby or staying in a shelter,” she said.

While was able to quit using drugs early on in her recovery process (“I was locked in a hospital for two weeks,” Banks said, “so the only choice I had was to stop”), Banks admits that Avivo’s residential program has been a struggle.

“I wanted to leave every day,” she said, “Staying clean wasn’t the hard part. The hard part was starting my life over again..”

Banks, who grew up 30 miles outside of St. Cloud in Big Lake, felt challenged by the idea of living in a city. “When I got to Minneapolis I didn’t know my way around. It was a drastic change to cut everyone out of my life and move somewhere new,” she said.  “I didn’t have any support because I lost relationships with my family due to my addiction. I had to learn to trust people in the inpatient program to get to where I am now. I’m happy I did that.”

With her baby’s birth fast approaching, Banks worries about what her future holds, but she thinks that the Avivo program will help her stay on the right track. She’s looking forward to bringing her baby to the parenting-support “family group” that meets three times a week, and she’s hoping that the work she puts in with the program will help her be able to spend more time with her oldest child.

“I’m excited to be a new mom,” Banks said. “A lot of the women I’ve been in the program were able to get full custody of their kids back. Avivo is all about supporting the moms and getting children back in their lives.”

Banks is willing to put in the work to pull her family together. Her own mother, also an Avivo graduate, was addicted to crack when Banks was a child, but she’s been sober now for 18 years.

“Her story makes me feel like I can do it, too,” she said. “This apartment feels like a really good step.” Once she’s settled in with her new baby, and demonstrates that she’s able to keep with her program and clean up her life, Banks hopes that her oldest child will be able to come to see her new home.

“It’s a really nice place,” Banks said. “This move will help his grandma feel comfortable approving an overnight visit. It’s a good place to live, a great home. I think I can raise my family here.”