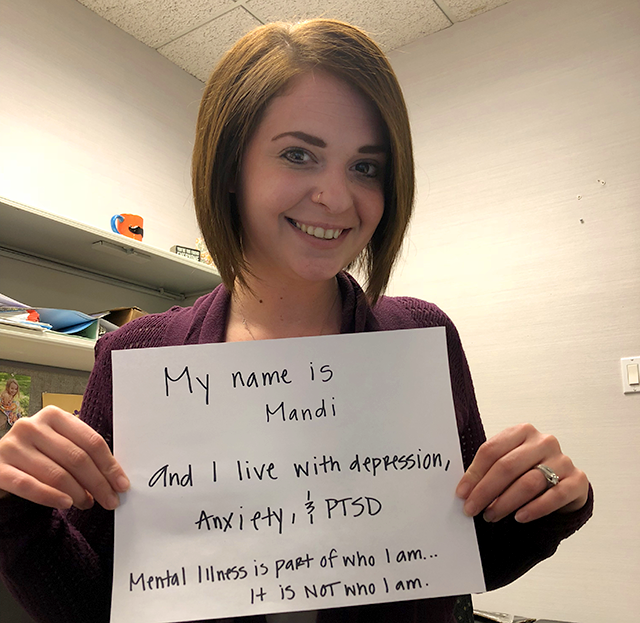 Courtesy of the Science Museum of Minnesota
Mandi Latzke is an “In Our Own Voice” speaker for NAMI Minnesota, and a mentor for young people working to take charge of their mental health.

For two torturous years, Mandi Latzke didn’t tell anyone about the sexual assault she endured at age 12. During those long months of silence, she lived with anxiety, depression and post-traumatic stress disorder (PTSD). When her parents, with the aid of a therapist, finally managed to discover the truth, Latzke was so worn down by her silence and the accompanying mental illness that she spent two months in an intensive residential treatment program.

Though she’d finally opened up to her parents, Latzke still wanted to keep her mental illness a secret.

“The stigma is so real,” she said. “In high school, when I was being treated for my mental illness, I made my parents tell my friends I was out with mono. I didn’t want anyone to know what was going on. I felt so ashamed.”

Today, Latzke has shed the shame. She is an “In Our Own Voice” speaker for NAMI Minnesota, and a mentor for young people working to take charge of their mental health. And this month, an interview with her and her mother, Marie Brace, about their personal experiences with mental illness will be projected on a big screen as a key part of “Mental Health: Mind Matters,” the Science Museum of Minnesota’s new exhibit, which premiered here and will eventually make its way to museums across the United States and Canada.

All of this openness is a big jump for Latzke, 29, but it feels like the right thing to do.

It’s estimated that one in 6 adults in the United States lives with a mental illness. The fact that so many people have been diagnosed with mental illness yet so few feel comfortable talking about it is frustrating for Latzke. She believes that culturally driven silence and shame is part of why she kept her trauma secret for so long.

“We can talk openly about cancer and diabetes and heart issues and brain tumors,” Latzke said, “but for some reason we can’t talk about depression and anxiety and bipolar and all these different mental illnesses that are just as real and just as hard to live with. I hope this exhibit will do something to help change that.”

“Mental Health: Mind Matters” has its origins in Scandinavia, where the exhibit was created in Finland before eventually touring in Paris and Lisbon. Science Museum leadership heard about the award-winning show at an annual science museum conference and felt it would be a perfect match for the museum, with its strong history of creating and supporting traveling exhibits based on topical issues.

Staff strongly supported the idea. “There was a lot of talk about, ‘We did a powerful exhibit about race. We can figure out a compelling exhibit that’s engaging and gets people talking about mental health,’” Dwyer said. Initially, there was talk around the museum about replicating the European exhibit, but, Dwyer added, “that morphed into negotiating an agreement for leasing rights to tour an updated version of ‘Mental Health: Mind Matters’ in North America.”

The decision to go ahead with the “Mental Health: Mind Matters” update was based on success. The museum’s now 10-year-old “Race: Are We So Different?” exhibit is a notably successful example of a topical science museum show that’s still touring nationwide. So far 4 million people in more than 50 museums have visited the exhibit, said Kim Ramsden, Science Museum of Minnesota director of communications.

While the European version of “Mind Matters” was remarkable, it also was starting to show its age, Dwyer said: “In touring exhibits, some stuff holds up, some stuff doesn’t.” With the repairs also came an opportunity to reconfigure the show for a North American audience. 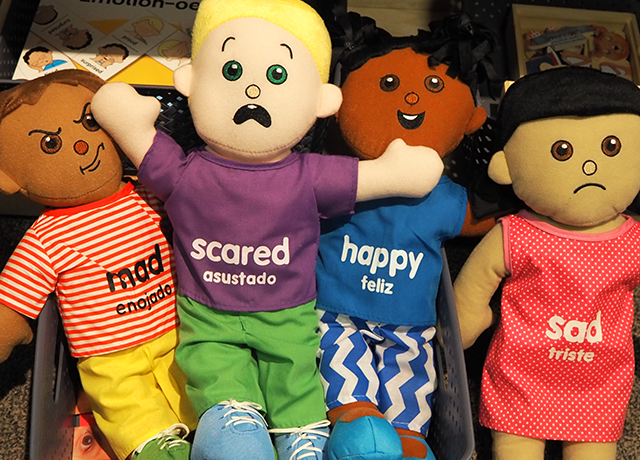 MinnPost photo by Andy Steiner
“Emotion dolls” will be available for kids visiting the exhibit.

“The exhibit was offered in French, English and Spanish when it toured Europe,” Dwyer said. “The English had been too obviously translated. I didn’t quite hit our voice. So we revised the copy, and while we were doing that, we thought, ‘Why don’t we get advice from folks here like NAMI and other providers?’ They agreed to help us, and we asked, ‘While we are revising this, are there things we could include to update the information and add additional context?’ ”

In the “depression theater,” for instance, visitors enter the home of a man with major depression. They hear his voice, and the voices of his family members as they discuss the significant impact his illness has on their lives. Another exhibit element brings visitors inside the brain of a woman with schizophrenia, where they experience what it is like to live with auditory hallucinations.

The person who created this interactive element, Dwyer said, “was diagnosed with schizophrenia as a teenager. She developed the auditory hallucination recordings to help first-responders better understand how to help people who hear voices.”

Dwyer said that during the nearly yearlong development process of the North American version of  “Mental Health: Mind Matters,” Science Museum staff pretested many the exhibit’s interactive elements with members of the public.

Staff also set up a table at a monthly “Social Science” nights, a mixer event aimed at a young-adult audience.

“We brought these big pieces of paper and markers and we asked people at the event if they wanted to make a short statement about raising awareness about mental health,” Dwyer said.  “I was amazed at the reaction. People really wanted to share their stories. Mental illness impacts so many people. Everybody has something to say.”

Enthusiastic public response is to be expected because as a culture we have reached a turning point in our attitudes about mental health, said Thomas Joseph, M.D., chief medical officer for PrairieCare Medical Group, a comprehensive mental-health practice providing inpatient and outpatient services for patients of all ages at nine Minnesota locations. PrairieCare is the “Mental Health: Mind Matters” presenting sponsor.

“When we heard that the Science Museum had involvement in this exhibit, we were eager to be able to partner with them to expand the discussion around psychiatric illness, decreasing stigma and increasing access to treatment,” Joseph said. “By providing a venue at such a trusted institution and being able to allow discussion of this topic, we will hopefully provide education to the community about decreasing stigma against people with psychiatric illness.” 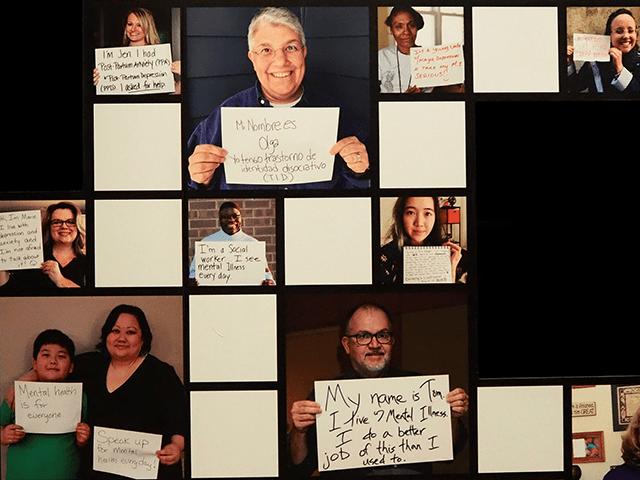 The European version of “Mental Health: Mind Matters” featured interviews with individuals who talked about the experience of living with various forms of mental illness.

“The interviews were compelling,” Dwyer said. “We thought they were important for helping visitors understand more about life with mental illness and how people with these diagnoses can do amazing things. But they were filmed in French or Finnish, so we decided to create our own content, something that would better speak to an American audience.”

Dwyer and her staff reached out to local advocacy organizations, including NAMI Minnesota. With the endorsement of Executive Director Sue Abderholden, NAMI sent word to their members, asking if they would be interested in telling their stories about life with mental illness for a new Science Museum exhibit. That’s how Latzke and Brace got involved.

“When I saw NAMI’s email, I immediately wanted to participate,” Brace said. “But I had one condition. I said, ‘I’d be interested in telling my story if I can do it with my daughter.’”

The importance of being honest

It hasn’t always been easy for Brace and Latzke to tell their stories. Brace, who was diagnosed with depression and anxiety when she was a young mother struggling with mysterious health problems, always unconditionally supported her daughter in her own struggle with mental illness, but kept both of their diagnoses quiet for years in fear that they’d face discrimination.

Though she’s successfully kept her anxiety and depression at bay for years with the help of medication and therapy, Brace worried that other people would judge her if they knew she had been diagnosed with a mental illness. She hid this part of her life from friends and co-workers, keeping a key part of herself from public view. 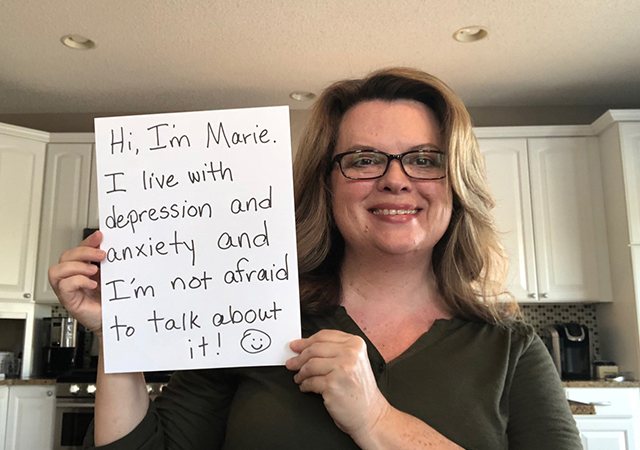 Courtesy of the Science Museum of Minnesota
Marie Brace worried that other people would judge her if they knew she had been diagnosed with a mental illness.

Then, about five years ago, Brace was at a work conference when she heard a talk about “Make It OK,” Health Partners’ public health campaign emphasizing the benefits of open conversation about mental illness.

“It wasn’t until I heard that program about how important it is to tell other people about mental illness that I decided, ‘I can do that. I’m doing great. I have such a great story to tell about how I discovered my mental illness and how I manage it,’” Brace recalled. “I decided that my message would be anti stigma.”

When Brace got home from the conference, she Googled “Make It OK” and learned about NAMI. After some discussion, she and Latzke decided to get involved.

“I became committed to the idea of being open,” Brace said. “Suddenly, I became all about talking about it. Mental illness will never be something you can talk about, unless people are willing to step forward. And if people don’t feel comfortable talking, they’ll have a hard time getting better. It has to start somewhere. It might as well be me.”

Latzke had been quietly mentoring a girl who was struggling with a mental illness diagnosis that felt similar to her own. When her mentee died by suicide, Latzke decided that her silence had to end.

“When she lost her battle with mental illness, I was like, ‘I need to get out of this silence and secrecy,’ ” Latzke said. “I wanted to talk to high school students and tell them that things can get better.” She signed up for the “In Our Own Voices” speakers’ bureau with that goal in mind: “I went through this at a very young age. I can relate more to high school kids and what they are going through.”

Today, Latzke said that, with the help of “medication, a hospital stay and intense therapy,” she has made it to a good place with her mental health. Her commitment to open communication is freeing — and gives her an inner strength and confidence that she hadn’t felt for many years.

“I don’t think I’ll ever be completely recovered,” Latzke said. “There are times where I can go two years and not be on meds and not have to go to therapy, and one day I’ll wake up and realize I have to go to my doctor and get back on my meds. At first that was reality was hard to live with. I didn’t want to admit I needed to go back and get help, but my mom is my on-call therapist. She always says, ‘It’s OK. You’re going to get better.’ Being able to talk about it makes it that much easier.”

“Mental Health: Mind Matters” will be on exhibit at the Science Museum of Minnesota, 120 W. Kellogg Blvd., St. Paul, through Jan. 6, 2019. Admission is included with museum tickets.