Bart still remembers the first time he smoked a cigarette.

“The first pack I bought were Winstons,” he said, with what seemed like a wistful half-smile. “The first cigarette I ever smoked was a Kool Super Menthol. That was back in 1975. It cost 50 cents a pack.”

Today, a pack of cigarettes costs much, much more than that, but Bart, a 10-year member of Mental Health Resources’ Seward Community Support Program (CSP), a drop-in community center providing socialization and services for people with serious and persistent mental illness, still smokes, as much as a pack a day. (Though he agreed to have his photo taken for this story, Bart did not want to use his last name.)

Bart usually spends about three hours a day at Seward CSP; when he’s not busy manning the center’s front desk, doing dishes, serving lunch, using the center’s free computers or playing pool with his friends, he liked to hang out on the program’s front patio facing Minnehaha Avenue, enjoying a cigarette.

No matter the weather, Bart rarely had the patio to himself: A significant percentage of Seward CSP’s more than 385 members are tobacco users, said Ann Henderson, Mental Health Resources vice president of clinical services.

This disproportionate rate of addiction, combined with the fact that tobacco companies historically marketed their products to people with mental illness and their health care providers, has inspired change.

Last November, Mental Health Resources, along with two more of Minnesota’s largest behavioral health organizations — People Incorporated and Avivo — announced that they would be banning tobacco at all of their facilities. The ban — for clients and employees — went into effect July 30 at Avivo and Mental Health Resources.

At Seward CSP, this meant that smoking would no longer be allowed on the patio.

For Bart, the day the tobacco ban went into effect was “no big deal.” He’d known that the plan was in the works for months, and he’d prepared for it, by attending a few of the smoking cessation groups offered at the center, stocking up on the Nicorette gum that was offered free of charge to anyone interested in cutting back and scoping out good “off-campus” spots to smoke. (“I don’t want to quit completely,” Bart said. “But I do want to cut back.”)

Even for a confirmed smoker like Bart, tobacco bans are “a good thing,” he said. “Little by little the counties in Minnesota are all going smoke-free. You can’t smoke in restaurants or most public places. I’m starting to get the hint.” And, as a person who’s naturally suspicious of the motivations of government and big business, he added: “I think about how the cigarette companies are putting dangerous chemicals into our bodies and it makes me angry.”

All this adds up to Bart becoming an unlikely supporter of Seward CSP’s tobacco ban.

“I’m all for it,” he said. “The more people go tobacco-free, the less they are going to smoke.”

Henderson chalks getting people like Bart on board with the tobacco ban to careful planning and strategy. For a few years before they even mentioned the ban to staff and clients, managers from the group of three nonprofits met with representatives from the American Lung Association to design a plan that would increase buy-in and make the tobacco-free transition as seamless as possible.

“Early on, we started our communications by saying, ‘This is where we’re headed. It is going to impact all of us,’” Henderson said. There were some people who were worried and concerned, she added, but organizers explained that it would be a long-term project. “Most of the people we serve said, ‘That makes a lot of sense. I’m surprised you haven’t done this before.’ They’re used to it. They go lots of places where they are not allowed to use tobacco.”

One strategy that organizers employed was gathering resources for staff and clients who were interested in quitting.

“We’ve done a lot of treatment interventions for them, including forming groups to help people learn coping techniques other than using tobacco,” she said. “We’re not saying anyone has to quit tobacco. If you do want to quit, we have provided a lot of different options for you.” 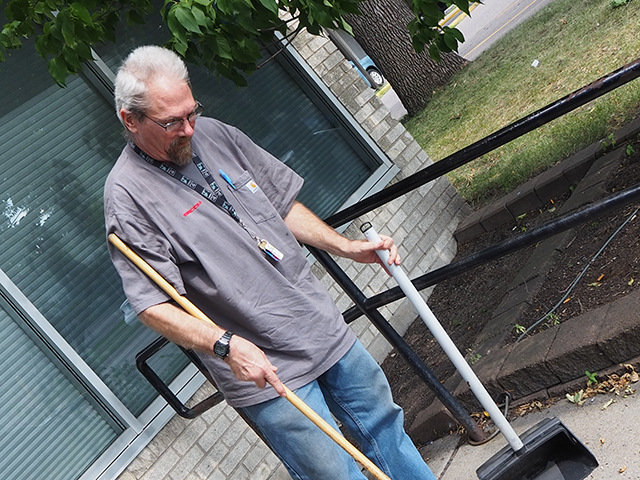 “We also have little things to occupy people, like fiddle sticks and pieces of hard candy that might help them get through cravings.” The support stations were scattered around each of Mental Health Resources’ sites, she explained: “There is no judgment. It is in an open space you don’t have to ask anyone to access it. People are using it. We’ve never asked anyone to identify as a smoker. There is a lot of shame around smoking.”

At Avivo, staff planned ahead for the tobacco-free launch day, said Boyd Brown, vice president of chemical and mental health services. As a way to clarify the ban once it went into effect, he explained: “We printed reminder cards saying, ‘We went tobacco free. If you want assistance with tobacco cessation, this is what you can do.’”

All in this together

Corey Hanson is a 10-year member of Seward CSP. He’s on the program Health Promotions team, working to help members build smoking-cessation strategies and enhance their overall wellness. When he was a child, most of the adults in his life smoked, and he’s been a smoker for decades.

Hanson said that the careful planning and communication leading up to the tobacco ban helped him not feel blindsided by the change, and even made him feel encouraged to participate in the process. He’s an enthusiastic member of Seward CSP’s smoking cessation group, learning tips for cutting cravings and trying out various stress-reduction techniques.

“The other day, they had us doing yoga,” he said. “It felt pretty good.”

After all these years, Hanson doesn’t know if he’ll actually ever quit smoking, but he’s more open to the idea than he’s ever been before.  “I’ve already cut back since we went tobacco-free,” he said late afternoon on the day after the ban went into effect. “Normally I probably would’ve already had five cigarettes by now, but I’ve only had two so far today.”

Even without the tobacco ban, Seward CSP member Patrick Miller said he was already working toward quitting.

“I probably would’ve quit anyway,” he said.  The doctor told me that if I keep smoking I will end up on oxygen with emphysema. And there’s heart disease in my family, so I have to quit for my health.”

Miller, who lives with depression and alcoholism, has been smoking on and off for 41 years.

“I’ve only had one cigarette so far today,” Miller said on Day No. 2 of the tobacco ban. He usually smokes a pack and a half a day, but this day he was vigorously chewing some Nicorette gum provided for free to CSP staff and members. “My goal is to quit smoking,” he added. “I know it’s what I need to do.”

That’s the kind of news Henderson likes to hear. She’s come to believe that the carefully mapped-out, no-judgment approach to smoking cessation that she and other program leaders have adopted may prove to be particularly effective.

“Over the course of the year while we’ve been really working on this plan, we’ve seen a lot of people quit or work toward cutting down. You never know who’s going to be ready or who would do it. Some of the people who’ve been smoking for 30 to 40 years are tired of it. They don’t want to be a smoker anymore, and they’ve taken us up on this opportunity to quit.”

Planning ahead helped smooth any rough edges around the no-tobacco transition, Brown said. 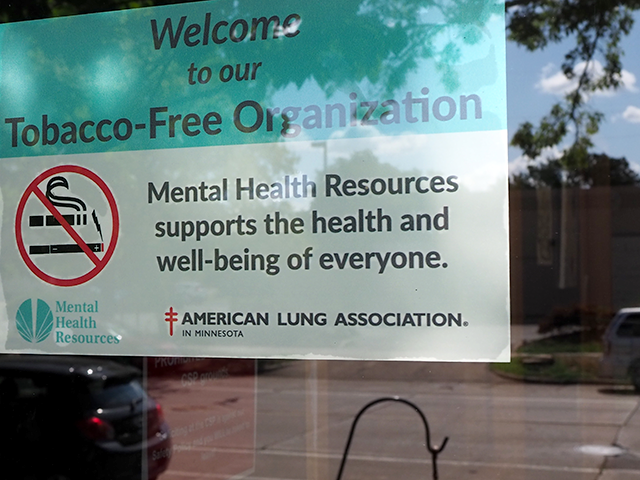 MinnPost photo by Andy Steiner
Last November, Mental Health Resources, along with two more of Minnesota’s largest behavioral health organizations — People Incorporated and Avivo — announced that they would be banning tobacco at all of their facilities.

At all Avivo sites, the response to the first official day of the tobacco ban has been, Brown said, “ho-hum. It has not sparked any backlash. Clients have been extremely supportive. Multiple staff have quit tobacco themselves.”

One Avivo-run CSP went tobacco free last year, Brown said, so they could draw from that experience.

“We learned that if you plan well the day a ban happens should be easy,” he said. “It should be ho-hum, like, ‘Finally we’re here. We’ve been talking about this long enough.’”

In the lead-up to the ban, staff started spending more time talking about the shady history of tobacco advertising and marketing, how in the past tobacco companies actually targeted people with mental illness and their care providers with messages that smoking could help reduce symptoms of mental illnesses like anxiety and depression.

“You wouldn’t see it as much today, but not so long ago, people with mental illness used to get targeted by tobacco companies, too.”

Tobacco companies also aimed their advertizing at therapists, psychiatrists and psychiatric hospitals, she said: “We were all educated to believe that smoking reduced symptoms of mental illness. We now know it exacerbates symptoms. Years ago, you might even dole out cigarettes to people in your care. It was very much a behavior modification thing. It was part of people’s treatment.”

Today, Henderson and her colleagues work to expose the injustice of those campaigns, explaining to clients how they were targeted for addiction by the tobacco industry.

“We talk about that all the time,” Henderson said. “We frame this as a social-justice issue. We talk about how it is completely unfair that people with mental illness as a group were sought out. They want your money. They want certain populations to be a lifetime users of tobacco.”

“Our clients have been targeted by the tobacco industry. We can talk about health until we’re blue in the face, about how smoking negatively impacts your health and how people who use tobacco die years earlier. But it doesn’t seem to impact people as much as a social-justice take on it does. That seems to really rile people up.”

For some of Avivo’s clients, Brown said, quitting tobacco feels “almost like thumbing your nose at big corporations, like, ‘You did this to me. Now I’m making my own decision to walk away.’ ”

“The more educated you are about these issues, the more you start to think, ‘Maybe I’m going to quit,’ ” he said. “Tara does an excellent job of making smoking cessation group fun and interesting.”

Making smoking cessation accessible and entertaining for people like Hanson is a good thing, Henderson believes, because when hard-core smokers are willing to consider cutting back — and don’t balk at restrictions like a tobacco-free patio — the whole CSP environment changes for the better.

Now, she said, “People who want to quit won’t be barraged by triggers every time they walk into our center. It will be much more welcoming place.”

On the day after the ban went into effect, Miller, looking for something to keep his mind off smoking, brought a big broom and a dustpan outside and began sweeping discarded cigarette butts off the center’s patio. Before long he’d filled a medium-sized garbage bag with dried leaves and crushed-out cigarette butts.

“I get a lot of anxiety, and a cigarette sometimes helps calm me down, but I know that it’s not the best way to go,” he said, as he swept stray butts into a pile. “I’m trying other options now. Keeping busy helps a lot to stop my cravings.”