When it happens it’s miraculous. For some reason, life is dragging you down. You’re plodding along, one foot in front of the other, when, suddenly, you hear a song that transports you out of the doldrums and to a lighter, happier place.

Something like that happened for Minneapolis musician Mark Mallman. In the years after his mother’s death he struggled with anxiety attacks that woke him, panicked, in the middle of the night and threatened to slow the insatiable creativity that had inspired a decades-long musical career  — a career that included the release of more than eight solo albums and such memorable feats as the days-long “marathon song cycles” that earned him a mayoral proclamation and national publicity.

This mood turn was sudden — “like flipping on a light,” Mallman said — and, for a time, he was blindsided.

A lifelong lover of a range of musical styles, from alternative rock to punk, disco-glam and metal, Mallman realized that he wasn’t finding joy in some of the music that he’d always loved. It was a frightening discovery.


“I just couldn’t listen to some of my favorite bands,” he said. “Joy Division scared me. It freaked me out.” Mallman doesn’t feel comfortable labeling this experience in psychological terms: “Maybe in the ’70s they would call it a nervous breakdown,” he said. “But it wasn’t that. It definitely took me a long time to get to a place where I could put a name on it. Now I like to say that for a while my life interrupted itself.”

But Mallman, who’s coped successfully with anxiety for most of his life, discovered a treatment that eventually helped him put his life back on course. Realizing that he was actually able to find joy in certain songs, he assembled a collection of them over a few months, and named it “The Happiness Playlist.”

Mallman’s playlist is an eclectic mix of musical styles, but all the songs have one thing in common: a focus on happiness, optimism, bravery and, most important of all, joy. While he worked on coming to terms with his grief and regaining his equilibrium, Mallman roamed around Minneapolis with his many friends, visited his father in Wisconsin, went to the doctor, got a sleep study, went out for meals, texted his ex-girlfriend — and kept “The Happiness Playlist” on constant rotation.

“I used the playlist to cheer myself up and help combat certain bits of anxiety that would go deeper than I felt like I needed them to,” Mallman said. “I realized this wasn’t an existential crisis. It was an amygdala hijack. It was like my body hijacked my amygdala and I went crazy — until I started listening to the playlist and things got better again.”

A naturally sensitive and finely tuned artist, Mallman nonetheless appreciated the practical solution that the playlist represented. To find inner peace, he accepted that he needed to take a step away from being a music creator for a time and allow himself to settle into the more passive role of music consumer.

“I’m pragmatic,” he said. “I like to focus on solutions. Listening to music, not performing it, brought me out of my situation. I had to let go of control for a time. I was consuming music, not producing it, and that was OK. I would sit back, put the playlist on, and go, ‘Ahhh.’ For me, listening to music was a path to joy.”

Mallman felt so inspired by his recovery that he wanted to tell other people about the experience. When he met Adam Wahlberg, founder of Minneapolis-based Think Piece Publishing, through a mutual friend, he told him that he’d like to write a book. [Full disclosure: Think Piece also published this author’s book on resilience.]

Wahlberg, a longtime Mallman fan, was intrigued and excited about this opportunity.

But Wahlberg also knew that Mallman was just coming out of a delicate period, and he realized that writing a book about his experiences could be emotionally draining.

“He was fragile after his mother passed,” Wahlberg said. “His whole persona for the 20 years before that was Mr. Positive, Mr. Upbeat. Then there was this shift, and he wanted to write about that.” 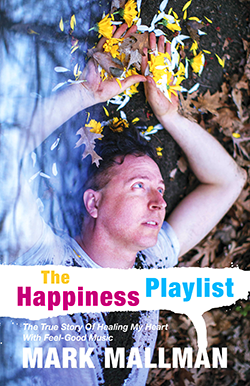 Wahlberg told Mallman that he’d be interested in seeing the book when he had a draft ready. That was all the encouragement Mallman needed: He began to write about his rough months and his recovery.

While he was writing the book, Mallman never let himself sink into the depths of despair — his goal was to write an uplifting, even funny story about grief and anxiety. He wanted to show his readers a path to happiness, and he did that by truthfully narrating his own journey, floating above depression and clinging bravely to joy.

“We have this story of a person who is frivolously going through his life, processing his mother’s death, going through a breakup,” Mallman said. “This isn’t a book about losing your mom. It happens to have it as part of the subject matter, but I feel that there are a lot of other things it the book, too.”

When Mallman understood that his writing might have the power to uplift others, just as the music in his playlist had uplifted him, he was thrilled. “I realized,” he said, “‘I can help people, make a difference, bring them joy just by reading this book.’ It was exciting. There is a guided meditation going through the book. The reader will not brought into darkness. The reader will be laughing instead. “

Mallman has studied screenwriting, and one of the first things Wahlberg noticed when he read a draft was that the book, which is steeped in Mallman’s life in Minneapolis’ music scene, feels almost like a screenplay.

“I thought the book was totally original and fun to read,” Wahlberg said. “It reads like a movie. You can imagine some of the scenes on a screen, the characters, the settings. His dialogue is strong. It’s remarkable.”


Mallman said he has read — or attempted to read — more inspirational self-help books than he can count. He admits to owning a sizable collection: Deepak Chopra is a personal favorite. But he didn’t want his own book to read like self-help.

“My book is about this very simple idea that when you are in a crappy mood, play happy music and watch how it can help,” Mallman said. “Music isn’t a be-all-end-all solution for everyone, but it has been a real solution for me. I built a career on it.”

In the book, Mallman writes openly about the experience of witnessing his mother’s struggle with mental illness.

“I grew up in a family where a member of the household was successfully battling depression,” Mallman said. “I was raised by a person who knew how to handle depression. She was strong and open with her emotions, and I was inspired by her when I wrote this book. If you think about it, 68 years is a long time to live with depression. It gives me a tremendous amount of empathy for what she lived through.”

Wahlberg said he was most impressed by Mallman’s goal of presenting his readers with a practical tool to lift their spirits and find their way to a happier place.

“Mark doesn’t want to write about the triggering events of his grief,” Wahlberg said. “What he’s really doing with ‘The Happiness Playlist’ is writing a cognitive behavioral therapy (CBT) book about tools that you can use to stay balanced. I’ve never read anything like it. Mark is writing what CBT people teach, spelling out skills you can use when you start to feel the pain.”

“Adam talked about how this book is really going to help people,” he said. “In the midst of rewriting my first draft I saw a post online about someone who had taken their life. They had left some sad posts and that spurred me to think that it would be neat to have something out there that manifests joy instead. I wrote ‘The Happiness Playlist’ so that other people can have one more tool in their arsenal, a tool that moves away from sorrow and brings joy.”

The two got to know each other in the mid-1990s, when Lazerbeak was still in high school and performing in the band The Plastic Constellations. Mallman, a Constellations fan, supported the young musicians, inviting them to participate in one of his marathon song cycles.

“He was this generous elder statesman,” Lazerbeak said. “He was already established here. He was really kind. He helped us get on our feet in the music scene.”

Lazerbeak and Mallman lost touch for several years, but began hanging out again last year when they ran into each other at a mutual friend’s wedding. The two met for lunch, and learned that they had a lot in common.

“Our minds were aligned,” Lazerbeak said. “I had gone through my own battles with anxiety and depression. I’ve had struggles, too. I worked on re-centering myself and got into meditation.”

Mallman told Lazerbeak about his book project, and Lazerbeak talked about his recently released solo album, “Luther,” an instrumental work he calls a musical “meditation.” He appreciated Mallman’s playlist idea. “Sad music doesn’t help me when I’m really sad,” he said. “I need to go listen to my favorite artists of all time. I can totally relate to the idea of listening to happy music to feel happy.”

They also collaborated on a song, titled “Peace on Earth.”

‘The triumph is the process’

“We have been on similar paths,” Lazerbeak said. “Both of us focus on the good and the positive. The struggle is good. The triumph is the process. When you talk about mental health it is easy to go down into the darkness. Mark doesn’t go there.”

People would have been shocked if Mallman had taken a different approach in his book, Wahlberg said. “Anyone who is familiar with Mark would say he is exuberant, super-sensitive, up and positive. In a lot of ways that’s what makes the reading experience of this book fascinating.”

When “The Happiness Playlist” book was finally finished, Mallman sent his friend a copy. After reading the book, Lazerbeak fired off a text. “I told him it made me really emotional,” he said. ”I was slowly crying for the last 30 pages. Not in a sad way, but in this cathartic way. His voice just struck a chord for me. It is a gift to be able to walk through a journey with someone who is so willing to be vulnerable. I know that he really wants to reach the people who are in the dark. That’s his mission, and he achieved it.”

“The Happiness Playlist: The True Story of Healing My Heart With Feel-Good Music,” goes on sale March 19. Readings are scheduled in St. Paul, Rochester and Duluth. On March 22, there will be a release party at 7th St Entry. It will be a celebration of life — and of and hard work, Mallman said.

“I’ll bring the band. I’ll read a little bit from the book. And we’ll be playing some songs from ‘The Happiness Playlist.’ You won’t want to miss it. It’s going to be great.”