Ron Stewart and his wife had already been considering adoption when they first heard the heartbreaking tale of Galya from a couple at their Roseville church.

As the story goes, Galya was abandoned by her birth parents in the Ukraine and then handed over to a guardian who locked her in a shed.

“Animals chewed on her, leaving scars all over her body and little hair on her head,” said Stewart, an IT project manager who lives in Coon Rapids.

So like thousands of other American families, Stewart and his wife of 15-years, Shannon, began the arduous process of adopting a young child from a foreign country, which has now included three trips to the Ukraine.

To document the experience, Stewart started a blog, Galya’s Tale for his friends, family and the world to read. 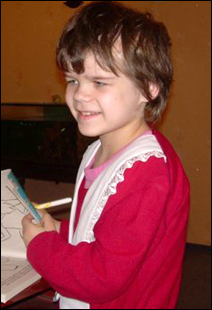 Courtesy of the Stewart family
Galya was abandoned by her birth parents in the Ukraine.

“I could have kept everyone up to date through email, but that doesn’t leave the record that a blog does,” he explained. “I like blogging as a medium due to the combination of informality and broad distribution of thoughts.”

He faced several challenges blogging from the Ukraine, including power outages, lack of Internet access in Kiev and the added complexity of figuring out what day it was for his audience back in the United States.

Stewart’s blogs go into extensive detail at points, documenting the emotional and physical toll the process can take on a person.

But the exhaustion paid off. Last Friday he returned to the United States with a new 6-year-old addition to his family. He’s well aware of the rough road ahead for Galya, given the trauma she’s experienced. He thinks that he will eventually share the blog with her.

“Integrating the family, teaching Galya about a new culture and language…it’s all very exciting and challenging at once,” he said.

Other blogosphere highlights and lowlights

• Dave and Cheryl Williams recently moved from Minneapolis to Hawaii and are making sure that we know what it’s like there by writing about the differences in two states on their family blog Lakes To Aloha. I wonder if they are jealous of our “White Christmas?”

• St. Paul blogger Colin gives a visual tour of the process required before going outside during our recent cold snap.

• A blogger in Arona, Italy, writes that a Twin Cities photographer is one of his favorite photo bloggers.

• There’s a new church coming to the Grand Avenue area of St. Paul, but it’s missing something important: a name. The blog Between Two Cities has a nice write up on the unique challenges of naming a church.

• Greg at Minneapolis Metblogs snaps a few photos of localized security signs at the Louisville airport and wonders what those signs could look like at Minneapolis-St. Paul International.

• St. Paul Real Estate uses a paper towel to describe absorption rates in the real estate market and how the Twin Cities is doing in 2008 compared to 2007. It works.

• Mac Noland rips into Bloomingdales at the Mall of America for their fees associated with gift wrapping.

• The Eden Prairie-based ‘Activist Next Door’ chides the new Eden Prairie schools superintendent for having 23 days of sick leave in her new contract.

Worth bookmarking
After being diagnosed with cancer two years ago, Emilie Lemmons began blogging about her experience. The St. Paul mother of two moved into a hospice last week and wrote what she called “the next…and probably last…chapter” of her life.

Lemmons’ blog is gaining attention around the world, including an emotional write up from a mother in Australia. Hundreds of comments are being left on each of her posts.