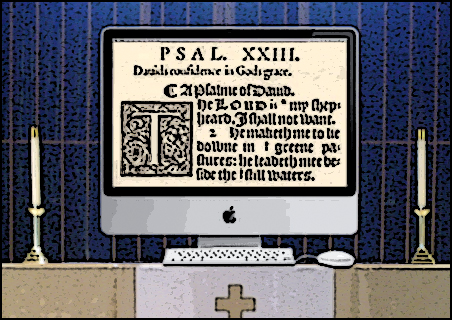 As the gap widened between him and his fundamental Baptist church, Bob Hayton found himself with more and more questions about his faith.

The St. Paul father of four began writing out his questions on a blog to help make sense of his thoughts, particularly the more controversial points.

Hayton eventually left his church, and those thoughts evolved into the creation of his popular blog Fundamentally Reformed.

“I’ve seen people change as a result of interacting with my blog, and I’ve been able to challenge non-Christians with the truth as well,” he explained.

Hayton is one of hundreds of Minnesotans who have taken to writing about their faith in blog form. The high number of Minnesotans expressing their spirituality online shouldn’t come as a surprise: 84 percent of us find religion “at least somewhat important,” according to a 2008 Pew Research poll of the state.

Yet each day, we say nary a word  about our beliefs. We — myself included — avoid the topic of faith with co-workers and acquaintances.

“To the extent that religion is sometimes a taboo topic in certain social spaces, religious blogging may help individuals express and share their faith in a supportive and encouraging environment,” said Pauline Cheong, associate professor of communication at Arizona State University and the author of “E-vangelism: Thou Shall Not Covet Thy Neighbors Blog Ranking.” “The partial anonymity provided by the Internet and deliberate connections of religious sites encourage religious expression.”

Transmission of values
In Cheong’s studies of human communication and religion, she’s found that there are several reasons people blog about religion, including entertainment and interaction. But, more than anything, she said, people take their faith online to transfer their own personal values onto others.

In other words, many religious bloggers believe they’ve been called to pass on a message.

“I hope that people read my blog and appreciate that they have learned something that has made them a better person and a better Catholic,” said Ray Marshall, author of the widely read Stella Borealis blog, when asked about the most rewarding part of blogging.

Susan Stabile, a law professor at the University of St. Thomas, writes posts and creates podcasts for her Creo En Dios blog to complement her work as a spiritual-retreat director. She said the best part about religious blogging is the ability to connect with people who she normally wouldn’t interact.

“An attorney in the U.K. A young Catholic woman in Asia. A law student in New York. A couple in California … I get e-mails from people in far-off locales telling me that something I wrote touched them, made a difference in their lives,” she said.

Faithful voices underrepresented
As I interviewed more than a half-dozen people about this subject, one theme emerged from Christians to Muslims, left to right. People of faith say they are underrepresented in the public eye, especially the mainstream media.

The Engage Minnesota blog aims to include Muslims in the broader public discussion by giving them a larger voice in local media. The founders of the site say that since 9/11, the portrayal of Muslims in the media has been overwhelmingly negative.

Fedwa Wazwaz is one of the site’s most thoughtful contributors and sees her writing as necessary, given Americans’ current view of Islam.

“I am an introvert, so speaking or writing drains me,” she said. “It is not something I like to do, as much as is it is something I feel needs to be done. If faith remains solely in the private sphere, then it cannot be challenged and the one-eyed kings will hijack the blind.”

Edina blogger and theologian Tony Jones said that blogs have allowed those with a religious message to “even the playing field” after years of being shut out by traditional media.

“I think we desperately need more media outlets — StarTribune, MinnPost, CityPages, whatever — to employ thoughtful, progressive religious columnists,” Jones said. “Please, God, can Katherine Kersten not be the only religion voice in the Minnesota media?”

More on local religious blogs
After poring over Minnesota’s religious blogs, I’ve realized that the makeup of the faithful blogosphere roughly mirrors what the Pew poll found to be our religious demographic. There are few Jewish or Muslim blogs, a couple of atheist bloggers, a good chunk of mainline and evangelical Protestants blogs and lots of Catholic bloggers.

In addition to the blogs linked above, here’s a list of the more thoughtful, regularly updated blogs from Minnesota about faith:

Do you know some others? Leave them in the comments field below.

Religion taboo topic? Not in blogosphere