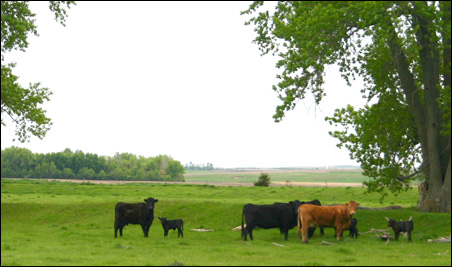 Photo by Emily Brisse
Just standing there under the wide sky, skinny-legged and unsure.

The other weekend I took a road trip to visit my grandma in Pipestone, Minnesota. First I drove straight west on Highway 7 for two hours, then southwest for another two. I hadn’t made this particular trip by myself maybe ever, and for a while I lost myself in my college CDs, the open windows, the sunshine highlighting the tops of hills and the bellies of little crooked streams. We’d had days and days of rain, so the land was lush.

It didn’t take long, though, maybe an hour west of Minneapolis, before I was struck by the ubiquitous presence of farms. Grain, dairy, turkey–they spread out on each side of the highway, patchwork squares extending into the horizon. Flyover Country.

I did not grow up on a farm. My grandmother did, in Iowa. Two of my cousins did, in Pipestone. A few of my high school friends did: Elisha, Robyn, Mary Jo.

But, no. What many easterners and westerners might think about the heartland–everyone tied somehow to a barn and a silo–isn’t true, at least not true for most of us, not anymore. My family bought milk from the store. We didn’t have a cellar. There were no fences to mend or cows that got out or dinner bells to ring. Waking up for chores at five a.m. was something I only heard about, like a war story, and on those below-zero winter mornings, I thanked the Lord that I was a businessman’s daughter.

Still, I am a child of this region, and though the intricacies of farms and farmers are unfamiliar to me, I’ve watched the fields every season of my life, always aware of the height of the corn.

So that morning it felt like a betrayal, a jibe against something I should have admired, when I found myself admitting that the acres of farms I was passing were not beautiful. What was aesthetic about a square of soil? About box-shaped homes? About yards filled with implements and old tractors and ramshackle sheds? There was not landscaping; there was function. An elbow of sturdy oak woods left to stand as a windbreak on the northwest side of the house. Lilac bushes, tall and wrangly, along the highway for some semblance of privacy. Worn tractor tires turned over next to doorsteps and filled with dirt, sprigs of basil and chives growing inside. A mousing cat waiting at the end of a gravel driveway with no ears. 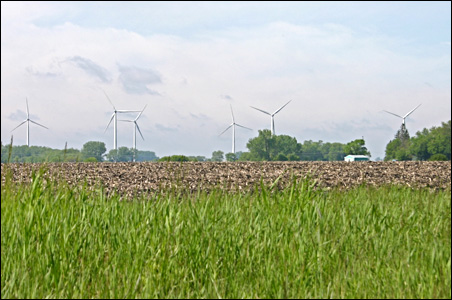 Photo by Emily Brisse
Clouds were rolling in, tinting the land.

Surely it’s because of such images that some leave for mountains, for vast oceans, for cosmopolitan high-rises that do not, for all their height, overlook one plot of uncultivated land. I can understand that. We live in a time where we have every right and ability to choose the view from our windows. To follow our hearts.

I, for one, have always chased beauty. My desire to travel, to experience every faraway corner of the world is so strong, that it often drives my husband crazy and leaves me anxious for all I have not seen, for all I might never see, as time does not stop, as I keep getting older, as the rains keep falling and the sea levels keep rising and the islands keep sinking into places beyond my reach. There are moments when I am hyper-aware of all that I’m missing.

But then in the midst of those thoughts, in the midst of a morning drive west through farmland, I crested the smallest possible hill on the quietest stretch of highway in the most unassuming part of the Midwest, and a black calf was in the middle of the road one hundred yards ahead, just standing there under the wide sky, skinny-legged and unsure, glancing toward the fence he’d squeezed through.

I stopped the car. I got out. I walked a few steps toward him, a corn field on my left, a corn field on my right. Clouds were rolling in, tinting the land. I kneeled on the pavement. The grasses swished in the ditches. Birds called from fence posts. And we looked at each other, he and I, for a long time. This post was writteny by Emily Brisse and originally published on Landing on Cloudy Water.