Welcome to this week in the Minnesota Blog Cabin.

Below, you will find a selection of pictures posted this week by the Blog Cabin community. Click on the pictures to be linked to the stories. The work from Minnesota’s bloggers has been exceptional this week. Please let MinnPost know if you have — or know of — a blog that you think should be featured on the site. Email JHansen[at]MinnPost.com, or find him on Twitter @MNBlogCabin.

Is Jesus Your “Political Hero”? from Theoblogy by Tony Jones

So, Pawlenty is pulling out ‘The Miracle on Ice’ and Jesus. I’m not sure if a miracle or resurrection will be enough to get him Iowa, but it’s better than what he’s been going with so far.

Adult Supervision from Barataria – The work of Erik Hare

“Moody’s, for example, could live up to its name and just cut our credit rating without any warning while proclaiming, ‘We just got fed up with your crap!  We’ve been taking it for years and years and all you congresscirtters ever do is squabble and we can’t take it any more!  You need to grow up and …” Ideally, they’d go on like this for about half an hour until everyone in Congress is staring at the floor in shame.”

“When I headed out into the backyard to brave feeding the fish in the pond on Sunday afternoon, it was downright tropical outside.  Felt tropical and oddly enough, smelled tropical, smelled like I was in Hawai’I only without the wiffs of plumeria that say ‘You’re in Hawai’I.’ This here it was more the kind of tropical that says ‘your shirt is rotting on your back’… Added misery, we big fat gentlemen of certain vintage tend to perspire in this weather, a lot.”

What is that I smell? Hints of oak, honey and gangrenous death? That was a good year.

The Zen Of Home Electicity from Thoughtful Bastards by Paul Udstrand

“And old electricians saying is always work with one hand in your pocket, that way you can’t complete a circuit with your body. It’s funny but you can grab a live household wire with one hand, just don’t grab a conductor of any kind with the other hand… not that I recommend grabbing live wires in any event.”

I recommend working at any job with one hand in your pocket. It just looks cool. People like that.

“The other gentleman was dressed to the nines with a spiffy, expensive summer suit, a very expensive looking leather brief case, a gaudy gold watch and a ring to match and shoes that were of the latest fashion and shined perfectly. He sported a smile that communicates I am god’s gift to the world and you might want to get on the ground and worship me.”

I thought Tom Petters and Denny Hecker were in the clink? I guess they are stuck riding the LRT now.

“One time I was at this woeful cocktail party at a private college in Iowa. By that, I mean it was a VIP gathering for college donors, in which students like me were to intermingle harmlessly as a sort of living reminder of why guests paid too much to drink white wine punch mixed in front of them.”

That’s just plain hilarious. I rarely add anything with my ‘pithy’ comments anyways, but this is just too good.

“After a couple stops we’d used more rope, bungee and ratchet straps on the canoe than you would have thought was possible. Overkill? You bet. Peace of mind, not perfect, but better, and after after a few dozen miles I let it go. Good news is, we arrived intact.”

I have always liked Sank. Mainly because I think I might turn into him in a few years. (see below) 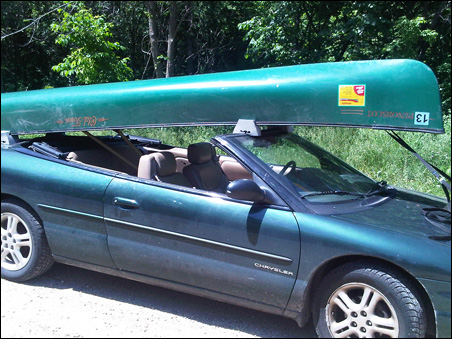 MinnPost photo by Jordan Hansen
What may — or may not — be the apparatus that a certain assistant web editor rigged up to transport his canoe.

The weekend roundup tends to focus on the amusing and humorous bloggers in our midst, but there has been some solid coverage of local and national events from the Minnesota blogging community this week. Here are a few selections:

“Back in 1999 when the women’s team won the World Cup final in another stunning game, I was a mother of a soccer playing 13-year-old girl, and I ruminated about that win and what it meant to me, a competitive pre-Title IX athlete in the 70s, in my own commentary.”

“Bachmann may or may not be a good candidate for president. She seems to deal with her headaches just fine, though, including the one the Daily Caller tried to administer.”

The sound and the fury over Range taconite revenue from MinnesotaBrown by Aaron J. Brown

“While this is right and fair, the whole escapade is very frustrating. That local money should never have been under consideration as a state budget fix.”

“The special session has come and gone and now the Minnesota state government is slowly grinding back into operation. The potential legislation authorizing a new Vikings stadium got nowhere, which isn’t particularly surprising. And thus begins the game of chicken.”

The future of real news? from Shawn Otto Neorenaissance by Shawn Lawrence Otto

Shelter Report: Does Private Wealth Make Compassion Possible? from Across the Great Divide by charlieq

“As a regular volunteer working in child care, I was not surprised by their compassion. But I wondered how people like Williams would be regarded through the prism of libertarian economics.”