Welcome to this week in the Minnesota Blog Cabin.

Above, you will find a selection of pictures posted this week by the Blog Cabin community. Click on the pictures to be linked to the stories. A special thanks to all of the bloggers for sharing their work with us. Please let MinnPost know if you have — or know of — a blog that you think should be featured on the site. Email JHansen[at]MinnPost.com, or find him on Twitter @MNBlogCabin.

CharlieQ of Across the Great Divide shares this from his Shelter Report, “Today, my work focused on avoiding bloodshed, quieting tears without caving into tantrums, and encouraging sharing among kids who didn’t see why they should give up anything.”

It took me some time to realize that this post was not related to the shutdown. CharlieQ to be drafted into service when the next one comes in two years.

From Mr. D at Mr. Dilettante’s Neighborhood on beer and the shutdown: ” Would they come into every point of sale with guns blazing and confiscate all the MillerCoors products? Would they waylay beverage trucks on the highways, forcing them to stand and deliver? Would they set up checkpoints on the border?”

Getting between a Minnesotan and beer is generally not a good idea. I’d put ten on the drinkers if it came to that.

Patrick Milan’s take on personal branding: “If I see one more presentation on ‘how to build your personal brand’ I’m going to have to storm the stage and stop the madness. If you have a personal brand, you might be a narcissist.” From tunheimmilan’s posterous

At this point in our history, is narcissist a bad word? Honestly, I’m not even sure.

Andrew Miller, from The Miller Times, Before PEDs, There Was LSD: The Dock Ellis Story: “It was one of the greatest individual performances in Major League Baseball history. On June 12, 1970, Pittsburgh Pirates pitcher Dock Ellis threw a no-hitter while under the influence of LSD.”

Dock was under the impression that he was throwing electric balls of light into the mouth of a dragon, but he’ll take it. 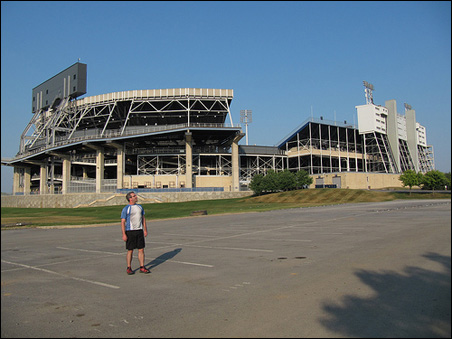 Courtesy of The Deets
Ed Kohler: The man, the legend…

From Ed Kohler’s The Deets: “This is my attempt to recreate the magic that is Tim Pawlenty’s campaign photo from a parking lot outside a stadium in Omaha. Penn State’s Beaver Stadium was my backdrop. I think this shot alone has boosted my poll numbers to somewhere between Bachmann and Pawlenty in Happy Valley.”

Kohler follows this up with some digging into Minneapolis Public Schools’ contracting procedures. He says of some videos made by an outside contractor: “Personally, I think these videos are HORRIBLE. On the plus side, hardly anyone has seen these videos.”

Shawn Otto of Neorenaissance brings us Gimme That Old Heartland Religion sharing his take on the state of science and politics: “Last week I wrote about how the Heartland Institute is indoctrinating untrained state legislators and GOP activists by taking a religious, proselytizing approach in spreading their pseudoscience, and listing speakers as “scientists” who are not…There is also a scientific consensus about the theory of gravity and the theory of evolution.  In the case of climate change, the consensus is the vast majority of climate scientists.”

From Minnesota Prairie Roots by Audrey Kletscher Helbling: “I’ve often wondered why Faribault Senior High School, the school my children attended (and one still does) offers so few advanced placement classes… Now, compare that to neighboring Northfield and Owatonna, each about a 15-mile drive away. Northfield Senior High School students can choose from 14 AP classes. In Owatonna, the number is even higher at 20 courses.”

Timing from Barataria – The work of Erik Hare by Erik Hare: “What’s more important than how it will change comedy is how it might change how we talk about current events.  One central element of comedy is timing, and a sense of timing is working its way into the patter of political talk.  But how do you render that in writing?”

Dayton winning the compromise argument from MinnesotaBrown by Aaron J. Brown: “The choppy, awkward first couple minutes shows why I’ve always wondered what’s up with Gov. Mark Dayton. The strong last minute shows why I respect him and ended up voting for him.”

How can I help, Millennials and Generationals? from Nonprofit Spark radio show: “It is perhaps a betrayal, but I don’t hold out a lot of hope for Baby Boomer peers to deal well with the current tectonic plate change in how nonprofits will be funded. They don’t really see it – they still think it’s about Republicans versus Democrats.” 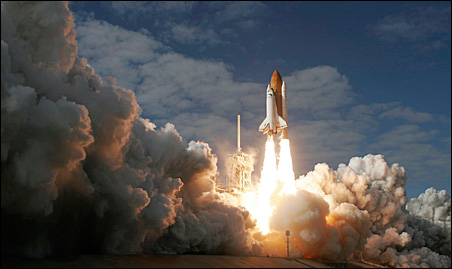 REUTERS/Pierre Ducharme
Girl meets geek: “What happened to the United States Space Program is simple: We sold it.”

To The Moon… Where Did Our Dreams Go? from girl meets geek by thegirl: “When I was a pre-teen, my parents took me to Kennedy Space Center. I was convinced at that moment what I wanted more than anything else was to be a Systems Analyst for NASA.”

‘Iron in the Sky’ air show slated July 22-23 at Range airport from MinnesotaBrown by Aaron J. Brown: “This two-day, patriotic celebration will recognize our armed service men, women and veterans with static displays and aerial demonstrations of aircraft from all generations.”

How Much Government Do We Really Need? from Duets Blog by Guest Blogger: “Seems to me the only people upset, angry, and distraught are reporters who are trying to make something out of this, and those who have temporarily lost their jobs, while the public goes about their business, raising their eyebrows at the media coverage with that increasingly common expression, ‘There they go again.’ In fact, my guess is sooner or later we’re going to begin wondering the reverse: Why do we have so much government? Why all the time, and what does it really accomplish?”

On Being a (Not Quite Good Enough) GLBT Ally from Theoblogy by Tony Jones: “Nor, of course, do I consider it an insult to imply that some conservative evangelical leaders may be harboring various sexual predilections.  In fact, I, like Dan Savage, would encourage them to honestly confront those.”

Budget solution means our revenues still don’t match up with our priorities from Minnesota Budget Bites by Christina Wessel: “Lawmakers agreed to approximately $2.2 billion in cuts to services that will impact our quality of life and our current and future economy.”