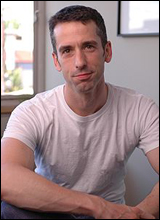 In fact, it seems that Savage may be America’s premier sex ethicist as well.

Savage has been writing his column since the early 1990s, but he has recently risen to a new level of prominence, based particularly on his It Gets Better Project, which went viral last year.

Savage was reared Catholic, and he’s now an agnostic, or atheist.  In any case, he is an outspoken opponent of religion.  However, unlike other atheists I follow on Twitter and elsewhere — Penn Gillette and Bill Maher, to name a couple — I find Savage far more interesting, far more compelling, and far more important for me, as a Christian theologian, to take seriously.

Recently, Savage was profiled at length in the New York Times by Mark Oppenheimer.  In, “Infidelity Will Keep Us Together,” Oppenheimer writes,

Savage believes monogamy is right for many couples. But he believes that our discourse about it, and about sexuality more generally, is dishonest. Some people need more than one partner, he writes, just as some people need flirting, others need to be whipped, others need lovers of both sexes. We can’t help our urges, and we should not lie to our partners about them. In some marriages, talking honestly about our needs will forestall or obviate affairs; in other marriages, the conversation may lead to an affair, but with permission. In both cases, honesty is the best policy.

This, of course, will immediately irk most Christians.  Christianity has traditionally — although not unequivocally — held to a strict standard of monogamy.  At least in theory.  In practice, Christian men have, over the last two millennia, had the opportunity for sexual dalliances through mistresses, concubines, and prostitutes.  Of course, there were puritanical moments in history, but the American moment was a particularly puritanical.  And now we’ve got Chris Hansen prowling our suburban neighborhoods, attempting To Catch a Predator.

Savage would never endorse pedophilia.  He would, instead, say that pedophilia is the result that of a sexually repressed culture, one that lacks honesty.  The ethic of honesty is what Savage calls for in his column, week after week telling his readers that if they’ve got a kink or a fetish, they should tell their partner about it.  And, if you’ve picked smartly, your partner should be GGG: good, giving, and game.

Savage’s sexual ethic is primarily one of realism: human beings are animals who, until very recently, procreated like animals.  It is evolutionarily dishonest to demand monogamy of a species predisposed against it.  It’s not impossible to be monogamous, he says, but it is super difficult, and you’ll be more likely to succeed if your partner is GGG.

I don’t know if Savage’s ethic jibes with a biblical, Christian view of sexuality.  But I do know a few things: 1) he’s a helluva lot more realistic about sex than most Christians I’ve talked to about sex; 2) based on my experience on this blog and at the Wild Goose Festival, a lot of Christians really want to talk about sexuality; and 3) many Christians are ready for our conversations about sexuality to expand beyond “what to do with the gays,” and instead have a more fully-orbed dialogue about sexuality and human identity.  I also know that, for the first time in my life I’ve met Christians who are in “open” marriages or are practicing polyamory — and I’m committed that my theological/ethical response to them be both Christian and pragmatic/realistic.

What say you?  Do you read Savage Love?  Does Dan Savage make you think, make you squirm, or both?

As a Christian, what do you do with Dan Savage?