CAN YOU IMAGINE how impressed I would be if ever I viewed the Saint Paul Winter Carnival snow and ice sculptures?

Up until Sunday, the only ice sculptures familiar to me clung to milkhouse and house rooflines or clumped like frozen waterfalls along bluffs in the Mississippi RiverValley.

In the winters of my youth, when winter truly was winter with mountains of snow from which to build forts and an abundance of icicles from which to grab swords, I welcomed the season.

The clash of icicle against icicle in a swordfight with my brothers and sisters entertained me between rounds of shoving manure into gutters and feeding cows and bedding straw and carrying pails of steaming milk replacer to calves huddled in the calf barn.

That and memories of boot-skating across patches of frozen water in the farmyard and along the edges of the cornfield encompassed my general experiences with ice.

For the first time, I viewed ice as anything but Nature’s art or a source of youthful entertainment or a peril to be avoided. 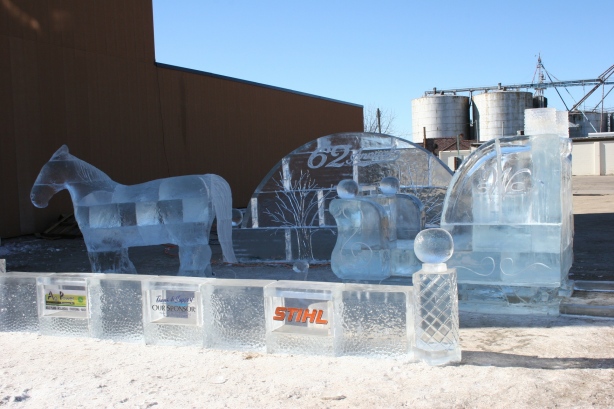 Just south of the Waseca County Courthouse, partially in the shadow of a downtown building and along busy State Street/Minnesota Highway 13, artists Adam Scholljegerdes and Joe Christenson, with assistance from their families, crafted a horse and sleigh from ice blocks in celebration of Waseca’s 62nd annual Sleigh and Cutter Festival. 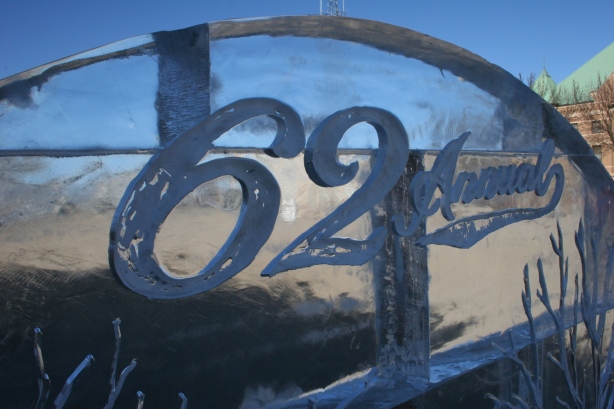 Photo by Audrey Kletscher Helbling For the first time ever in 62 years, ice sculpting was added to Sleigh and Cutter festivities. The event typically involves ice harvesting from Clear Lake, something which did not happen this year due to warm weather and open water. The ice sculpture is just south of the Waseca County Courthouse, a snippet seen here to the right.

Of course, I have nothing with which to compare this work of art. But suffice to say that the pair’s rendition of a horse pulling a sleigh impressed me, my husband and plenty of others who stopped to photograph the ice sculpture, even sit on the sleigh and pet the horse. 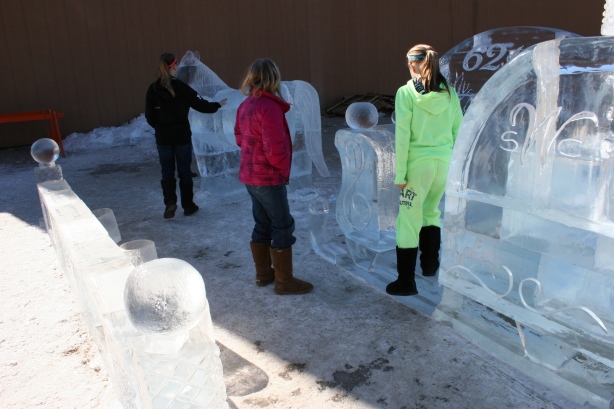 This ice sculpture is a new addition to the annual winter festival which spans several weeks and weekends in February. This year’s fest, which included events like snowmobile races, card tournaments, ice fishing and a parade, runs through February 19. One final event, a Children’s Dream Catcher fundraiser for terminally-ill children in the Waseca area, is set for March 24.

For now, the ice sculpture serves as a visual focal point for the Sleigh and Cutter Festival.

Make haste, I say, if you want to view this temporary work of art in rural southern Minnesota. 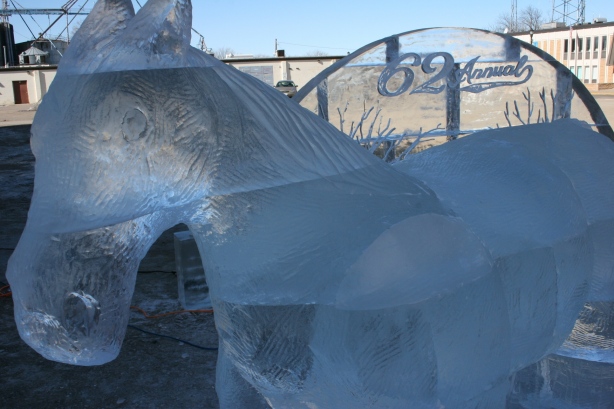 Photo by Audrey Kletscher HelblingThis close-up image shows the blocks of ice that comprise the horse. Artists labored nearly 3 1/2 days transforming 50 blocks of ice into this work of art. Sculptor Adam Scholljegerdes worked on a team that recently won first place in the amateur division ice sculpting competition at the Saint Paul Winter Carnival. He is an artist at Brushwork Signs in Faribault, where I live. Joe Christenson has competed at the Saint Paul Winter Carnival since 1986.