It’s well above freezing in St Paul and what little snow there was has melted away.  The High School Boys’ Hockey Tournament is starting today, so by tradition there should be one last gasp of Winter left.  But we have a change of seasons, and that’s a good time to catch up on a few of the topics that we have covered in Barataria that are always still developing.

Jobs:  The ADP Employment Report came out this morning, showing a very solid gain of 216k jobs in February.  This isn’t the official report, which comes out next week, but the two have been running close lately.  Manufacturing added its usual 10% of the take, 21k jobs.  One more month like this and we will be talking about net job creation during the Obama administration.

The turnaround is stunning because by most accounts job growth is leading general economic growth.  That is unheard of in a postwar recovery after a recession, but as we all know this is a very different economic event.  Part of the issue has to be pent-up demand for employees caused by a lack of hiring during the last decade.  There also appears to be solid restructuring, as the biggest net gains were in small and medium sized companies.

Republican Screwups:  Rush Limbaugh’s attack on Sandra Fluke shows that the bloodletting will only continue for the Republicans.  This is a story that will not end because it has become an emblem of so many problems for the party, inside and out.

Many commentators have noted how the disgusting remarks laid bare that the issue at hand was indeed about contraception, not religious freedom as it was carefully pitched before that.  The spin was totally blown, and that is a problem.  But the reaction, coming as it did after the Komen Foundation flap last month, has been even more galvanizing.

In both cases, the initial stories were quite blunt in nearly all news accounts that women’s reproductive choices were the main issue at hand.  What followed was a social media firestorm that kept on for days.  In both cases, this eruption caused major change – Komen reversed themselves and the controversial VP quit, and Limbaugh’s advertisers are leaving in droves.  There are three lessons being taught:  there are dark forces that really are out to challenge your reproductive rights, you are far from alone in your outrage, and activism gets results.

Take these together and you have two object lessons bound to fire women up like they have not been in a long time.  This will have an affect on the election.

Debt:  Twitter friend @sumnums took the chart showing our crushing debt as just one data point – the ability to service the debt seemed at least as important to him.  So he created this chart from Bureau of Economic Analysis data showing debt service as a share of the economy (by GDP): 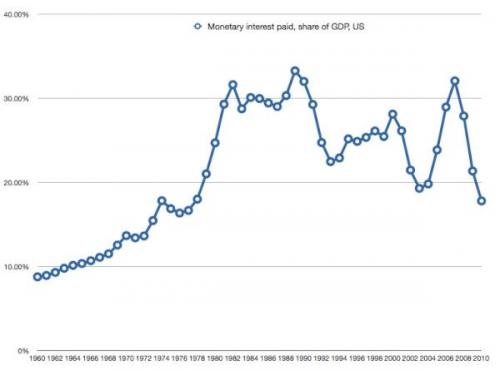 There are some striking features.  Note that debt service has not been below 18% of GDP since 1980, once again a year that seems to show a big inflection.  Also note that the spikes on this chart clearly show each recession since 1960, meaning that debt service has likely been the main cause of economic slowdowns – which explains the tremendous attention the Federal Reserve has had in this time.  But what is especially interesting is that despite the large amount of debt currently owed, service costs are at a post-1980 minimum because interest rates are very low.  This is a topic worth digging into more heavily.

Speaking of 1980’s inflection point, Reagan’s famous budget director David Stockman had a thoughtful interview in the Burlington Free Press.  He also talked about private debt as a crushing problem, and declares that significant growth is impossible under these conditions.  More to the point, when it crashes he says “The carnage will be unimaginable.”  One figure he points to is that since 2000 non-residential capital investment has grown by only 0.8% – meaning that we stopped investing in our economy about when this Depression started.

I think we can see how history will describe the era we live in now – a financial bubble from 1980 on which deflated in 2000 into a Depression that all the king’s horses and all the king’s men did their level best to contain but were still unable to entirely prevent.  What this will mean socially and politically for the generation coming of age right now should be interesting.

Greece:  There is a lot of news out of Greece, and yet there is nothing new at all.  It’s been two years of solid crisis at this point and yet … it just will not fully resolve.   Faith in the EU has to be grinding down to nothing by now.