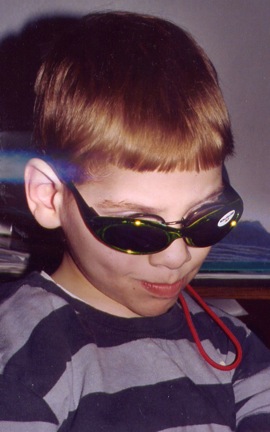 Justin, Passover 2003: looking cool while
experiencing the plague of darkness

This time of year, as we start to clean out the Chametz, pull out the Seder plate and get the timbrel down off its shelf – as I ready my home and heart for my favorite holiday – there is also a tinge of sadness to our preparations. Justin’s name, which comes up not infrequently all year, will be mentioned more in the weeks to come – by me, by my wife Tina, by our son. As we unpack the Passover boxes, I know there will be items in there that I will find myself just holding, as I stare in wistful silence. And I will shed more than a few tears preparing for another Passover without him.

What does the wise child say? “I would like to know everything about Passover and its observance.” Since this child is very motivated to learn you should explain the story and all the laws of Passover in great detail.

Justin came into our lives just as Tina and I were finding that our separate lives were merging into one. He was a student of hers originally, but she – and me by extension – became close with him and his parents after her professional role in his life had ended. As Tina and I set up our first home together and planned our first Seder together, we knew we wanted to include them. And I remember saying that we were meant to make this particular Seder.

You see, Justin, who was a preschooler at the time, had severe multiple disabilities. He was non-verbal, used a wheelchair (although later he would learn to walk, just not usually in the direction anyone might ask him to), and had a lot of self-injurious behaviors. A seizure disorder and severe brain damage had left this little boy with some awfully big challenges.

But here we were, a couple of teachers – a Jewish Early Childhood Educator and an Early Childhood Special Educator. We seemed a partnership uniquely suited for this task. It wasn’t just about having Justin present at our Seder, but for us it was about true inclusion – making it a meaningful experience for him.

So Tina and I sat down, Haggadah and notepaper in hand and talked it through. This task was challenging for several reasons, not least of which was that Justin’s health required a very strict diet in order to help prevent seizures. Of course Passover, and the Seder in particular, are very centered on specific foods. But, there were very few things Justin could eat, and Matzah was not one of them!

What does the rebellious child say? “Why do you bother with Passover?” This child says the laws of Passover are for you and wishes not be a part of the rest of us, the Jewish people. You should say: It is because of what G-d did for me when I went out of Egypt” For me and not for this child who would not have been saved.

As with most of Judaism, a Seder is a series of actions. Judaism is a religion of doing as much or more so than belief. Through the actions we perform, whether it is building a Sukkah, pounding our chest during Al Chet, or eating Matzah, we affirm our belief in G-d and our participation in our community. So, true to form, a Seder is a list of actions we perform to remember the Exodus. To a Jew, remembering is as much a physical action as a mental one.

The challenge before us was to adapt these actions to something that Justin could experience. For each step we talked about what was the essence of the step – what it is an adult learns and remembers and experiences while performing that step – and how it is that Justin could get that same essence.

What does the simple child say? “What is this?” To this child you must carefully and gently explain: “The reason we celebrate Passover is because God rescued our ancestors from slavery in Egypt.”

For some steps it was easy. For the cleansing experience of Urchatz and Rachtzah, the two times we wash our hands, Justin could splash in a bowl of water. For Yachatz, Justin could be helped to break a piece of Matzah in half. For other steps his dietary restrictions posed a considerable challenge. Tina fortunately thought of using organza, a fabric that when wrapped around a food would allow Justin to get the taste without ingesting the food and risking a seizure. To experience the Maggid, the telling of the story, we used a long series of props from blocks for the bricks we used as slaves, to plastic bugs during the plagues, to a timbrel to shake as we talk of the crossing of the Red Sea. For Matzah, we let Justin chew on a toy matzah made of plastic – and joked about how little difference in taste there would be.

But, in the end, what we all taste at the Seder is the transformation from slavery to freedom, and never have I felt more appreciative of that freedom than when sharing it with our dear friend Justin.

That first Seder was the beginning of many years of celebrating Passover together with Justin and his family. I would lead the overall Seder for everyone and Tina would facilitate Justin’s Seder, helping him through the 14 adapted steps Tina and I had chosen. And Justin was always a big presence at our Seder. He never said a word, but he sure knew how to vocalize and he belted out nice loud sounds with all of us. He would bang on the table with enthusiasm and would take to heart the tradition of leaning and being comfortable at the Seder by always find a way to get at least one foot up on the table.

Then, in 2007, after a decade of Seders together with us, Justin died very suddenly.

He had just been at our house for Rosh Hashanah about a week before. Long released from his previous restrictive diet, Justin had been allowed to eat whatever he wanted. He loved eating with exactly the enthusiasm you would expect from someone who had spent so long having measured portions of a limited list of food. I had commented that night that I took it as the ultimate compliment to my cooking when he began stealing extra helpings off the plates of those sitting near him. After dinner he had lingered on our couch, his long teenage body cuddling in with Tina. I can picture them there as if it was yesterday.

Through sharing Seders with Justin, I gained a new appreciation and understanding of my favorite ritual of the year. As we examined each step and broke them down for him to experience, I felt, I remembered and I appreciated their essence more than ever before, and for that I will always be grateful to him. Who would have guessed I could learn so much about this holiday I love from someone who never spoke a single word?

Justin was our child who does not know how to ask. And by requiring us to begin for him, he brought new light to old traditions for me – something for which I will always be grateful. Thanks, Justin. I’ll bang the table extra hard this year during Dayenu, just for you.

And for the child who does not know how to ask a question: You must explain without being asked. We celebrate Passover because G-d did miracles for us when we went out of Egypt.

Sharon Rosenberg-Scholl has been a Twin Cities Early Childhood Jewish Educator for 17 years and lives with her wife and son in St. Paul. She cries when she votes, spent years designing an accessible, traditional, egalitarian, kid-friendly Passover Seder and makes better potato latkes than you do (Just saying).

The child who does not know