Friday afternoon, the text of the bill detailing the proposal for the new Minnesota Vikings stadium was released.  The bill fits the outlines of the deal announced by Governor Mark Dayton, Minneapolis Mayor R.T. Rybak and Vikings owner Zygi Wilf on March 1.

Construction costs of the new facility, which would be built just to the east of the Metrodome, total $975 million dollars.  The Vikings and other private sources would put up $427 million, the state would contribute $398 million, and the city of Minneapolis would chip in the remaining $150 million.

Minneapolis’s contribution would be paid for by redirecting the revenue from existing taxes in place to support the Minneapolis Convention Center (a 0.5% sales tax, downtown restaurant and liquor taxes, and a lodging tax).  The Vikings share would include stadium naming rights as well as expected assistance from the National Football League.

The state’s portion is where things get tricky.  Gov. Dayton has promised “no general fund dollars” will go to the stadium (more on this below).  The entire $398 million is projected to be paid for by appropriation bonds backed by revenues from electronic charitable gaming, primarily electronic pulltabs and bingo.  In order to support the $398 million principle and interest over the next 30 years, the state would need to make annual payments of about $40 million.

Last year, charitable gaming (which is 90% paper pulltabs, with the rest split among bingo, paddlewheels, tipboards and raffles) generated about $38 million in revenue for the state.  The state Revenue Department projects that the electronic gaming will generate about $62 million per year, leaving a $22 million cushion.  No problems, right?

Maybe not.  Critics have pointed out several potential problems that may need to be addressed.

Problem #1:  No state currently uses electronic pulltabs to the extent being proposed here in Minnesota, so there’s no history anywhere to pull from.  Idaho and Florida have limited use of such games, which limits the ability to extrapolate from their results.  Virginia is planning to rollout electronic pulltabs and bingo later this year, but that too will be on a more limited basis than what is proposed here.

Problem #2:  Existing forms of charitable gambling are in the midst of a serious decade-long drop in revenues.  In fact, gross revenues have dropped 31% over that time and tax revenue to the state has dropped 34%. 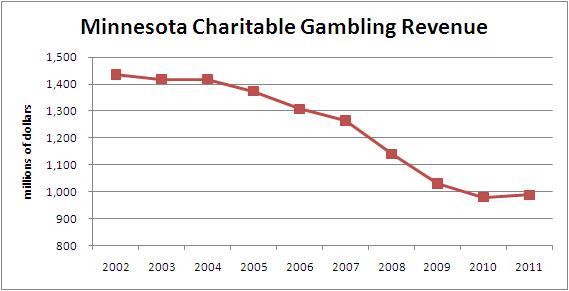 Problem #3:  charitable gaming advocates say Revenue Department projections are widely out of line.  Because of the issue in Problem #1, some feel that the assumptions used by the Revenue Department are not accurate.  For instance, here’s an example cited by King Wilson, Executive Director of Allied Charities of Minnesota, in MinnPost:

Take Apple Valley American Legion Post 1776. It has only one site, its clubhouse, and previous legislative proposals have limited each site to a maximum of 12 pull-tab and bingo machines.  Revenue from pull-tabs has been estimated to produce $225 a day, bingo $90.

“If you multiply each of those by 12 machines and 365 days a year, you get $1.4 million,” says Wilson. The Department of Revenue, however, says that Apple Valley’s revenues will rise by nearly $6 million.

Charities currently pay about 1.2 cents per paper pulltab in expenses, but they would be on the hook for leasing costs of $100-125 per month per machine with the electronic systems (the equivalent of about 10,000 paper pulltabs).  Increased costs for charities may translate into lower payouts for gamblers.  Lower payouts for gamblers translates into fewer gamblers, which lowers revenues — starting a vicious cycle that makes gaming unprofitable for the charity and reduces tax revenues available to the state to pay for the new stadium.

So where does all of this leave us?

The whole process has been distasteful, to say the least.  And, owners of professional sports franchises are not the most sympathetic group of characters in the world.  Certainly, one can fairly argue that as a state, we shouldn’t even be in the business of building stadiums and we should thank the Vikings for the memories and let them move along to their next destination.

Personally, I don’t fall into that camp.  I believe that professional sports are part of the fabric of life in a metropolitan area like the Twin Cities and that these facilities are part of the infrastructure of an area with over 3 million people.  It’s important to structure the deal in a way that protects the public investment and doesn’t unduly subsidize wealthy team owners.  We’ve done this before with Xcel Energy Center and Target Field.  We can do it again here. 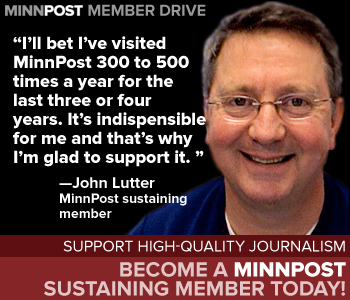 Well, if that’s the case then I think the Legislature has some work to do here to firm up the revenue source that backs the state’s investment in such a facility.  At the very least, the bill should contain a fallback measure that is triggered if gaming revenue falls short of the level required to cover the state’s contribution — my thought would be a ticket tax levied on events in the new stadium until the shortfall is recovered.  Perhaps even better would be a broader expansion of gambling to racinos at Canterbury Park and Running Aces or a Block E casino.

This state can’t afford to have critical investments in education, health care, public safety and transportation jeopardized by uncertainty about electronic pulltab revenues.  The Legislature needs to provide additional certainty around how the state portion of the stadium’s construction tab will be paid before voting to approve it.

Let’s hope that our legislative delegation steps up to the plate and makes constructive changes to the bill.  Rep. Joe Hoppe is the chair of the Commerce Committee in the House, which will almost certainly hold hearings on the bill.  Hoppe has also spent time as part of the legislative working group on this issue, so he should be well-positioned to steer this bill in the right direction.