Chinese astrophysicist Fang Lizhi died unexpetedly on April 6, 2012, at the young age of 76.  I first learned of it via an unusual source: The New York Review of Books.

That a Chinese astrophysicist’s passing is noted in a prestigious American literary journal is a testament to how Fang crossed boundaries between the two cultures of humanities and science, and was much admired, even loved, in both.  Fang was a frequent contributor to the Review, which also says quite a lot about the man.  That he was still thought of as young by me and others was a testament to the vitality of his ideas.

Most of my readers will not know who he was, but they will resonate with those ideas.  They are important ideas.  You see, Fang wrote about science as a force for human rights.

Anyone who has read Fool Me Twice: Fighting the Assault on Science in America, will be familiar with the argument that science is never partisan, but it is always political, and that recent attacks on science are a sign of a slide into authoritarianism.

Like democracy, science is inherently antiauthoritarian, a top-wing activity.   It opposes authoritarianism because it takes nothing on faith.  It says “show me the evidence, and I will judge for myself.”  This tends to be politically inconvenient for kings, popes and ideologues, who want to assert their views without having to provide evidence.  They prefer to simply provide loudly voiced and compellingly argued opinions. 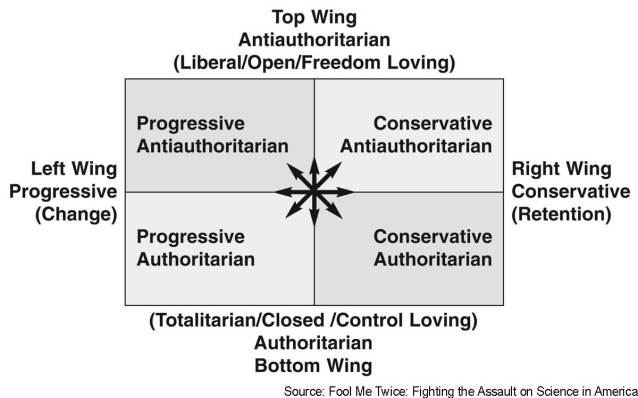 One of the things the book covers is how scientists were jailed and even executed in many countries when their ideas were viewed as politically inconvenient.  Science is always political, because it creates new knowledge, and new knowledge always challenges vested interests, whether they are church interests or those of business or government.

That happened a lot in China during Mao’s Cultural Revolution in the late 1960s.  Chairman Mao liked to celebrate his peasant roots, much like some Tea Party types and people like Rush Limbaugh loudly celebrate their anti-intellectualism today.  Limbaugh calls academics “effette, arrogant intellectuals.”

Like Limbaugh, Mao was suspicious of scientists and academics, and viewed them as “dangerous antirevolutionaries.”  They were “struggled against,” banished to work camps to be reeducated, or they were jailed or shot.  Mao closed the universities to all but a select few – for a decade.  He ignored the advice of scientists in making national policy and as a result, he brought on the worst famine in human history, in which more than forty million Chinese died.

Fang Lizhi was one of those scientists that Mao and his minions didn’t like very much.  Like my friend Fan Shen, who has written the most compelling book on the Cultural Revolution I’ve ever read, Fang Lizhi was persecuted and confined to a brutal reeducation camp to learn Mao Zedong Thought and the ways of peasants.  His was at a coal mine in southern Anhui province.

Lacking any scientific equipment, Fang decided his only hope of staying intellectaully alive was to specialize in theoretical astrophysics which, he told his friend the sinologist Perry Link, was “the only field of physics I could pursue without equipment.”

After Mao died in 1976, sanity and some limited forms of intellectual tolerance began to slowly return to China.  The universities were slowly re-opened, and Fang became vice-president of China’s prestigious University of Science and Technology in Anhui.

Fang said the same sort of thing I do about science, tolerance and freedom, but he said it far more eloquently.  In a 1996 essay he co-wrote with Link about a book by sinologist Lyman Miller, he was perhaps at his best.  The words could be applied to antiscience authoritarians in America today, including postmodernist false balance journalists, cell phones cause brain cancer activists, anti-vaccine activists, biblical literalist evangelicals in their war against reproductive control and evolution, and climate change deniers.

1. “Science begins with doubt,” whereas in Mao’s China students were taught to begin with fixed beliefs.

2. Science stresses independence of judgment, not conformity to the judgment of others.

3. “Science is egalitarian”; no one’s subjective view starts ahead of anyone else’s in the pursuit of objective truth.

4. Science needs a free flow of information, and cannot thrive in a system that restricts access to information.

5. Scientific truths, like human rights principles, are universal; they do not change when one crosses a political border.

Fang stood up against authoritarians in the Deng Xiaoping government that followed, and like Jon Stewart, he used satire to mock them in his physics classes. His students loved it, but the authoritarians in the Communist Party didn’t.  They fired him from his job and blacklisted him in universities across China, but it only made him more popular with students everywhere.  Fang became one of the central figures behind the 1989 student uprising that culminated in the Tiananmen Square demonstrations.

After the massacre, Fang and his wife, the equally courageous physicist Li Shuxian, became public enemies number one and two in China.  They took refuge in the US Embassy, where they became trapped by the Chinese government as house prisoners for more than a year until the Japanese government negotiated their release.  When Fang died earlier this month, it was as a physics professor at the University of Arizona in Tucson.

Science is a humanitarian force.  Fang Lizhi lived it.  By living it he became great.  His clarion voice will be missed.