I COULD HAVE LISTENED to Dean Urdahl for hours. Not Urdahl the Minnesota State Representative from District 18B. But Urdahl the historian, the retired American history teacher, the storyteller, the writer. 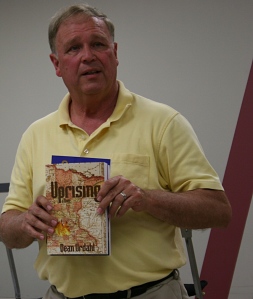 Photo by Audrey Kletscher HelblingDean Urdahl has written the trilogy of Uprising,
Retribution and Pursuit.

The southern Minnesota politician, who co-chairs the Minnesota Civil War Commemoration Task Force, was in Faribault Thursday evening to talk about the U.S.-Dakota War of 1862 and to promote his trilogy of historical fiction novels about that conflict.

Urdahl’s interest in the U.S.-Dakota War is rooted deep in family history, in the soil of Meeker County where his Norwegian immigrant ancestors settled in 1856 and where, on August 17, 1862, five settlers were killed by a small group of Dakota. That attack in Acton Township, only 1 ½ miles from Urdahl’s current home, marked the beginning of the war.

Urdahl’s great-great-grandfather helped bury those five victims in the cemetery of Ness Lutheran Church, a country church southwest of Litchfield. A monument there honors the five who were slain. The Representative grew up attending Ness Lutheran, listening to his mother tell stories about his ancestors and the area’s history. That sparked his interest in history and specifically a strong interest in the U.S.-Dakota War of 1862.

“What happened in 1862 (in Minnesota) is largely ignored by historians,” Urdahl said, adding that the U.S.-Dakota War “gets scant attention and deserves more.”

In 1862, a divided nation was more focused on the conflict between North and South than on the clash between cultures in Minnesota, Urdahl explained.

This historian, however, certainly drew attention to the war between the white settlers/soldiers and the Dakota during his presentation, “The Dakota War, a clash of cultures,” at the monthly Cannon Valley Civil War Roundtable meeting in Faribault in this, the 150th anniversary year of the War.

Cultures collided, Urdahl said, as immigrants settled in the native home of the Dakota and the government adopted a policy “to turn them (the Dakota) into farmers.”

Conflict also existed among the Dakota—between “the blankets,” those sticking to traditional ways, and “cut-hairs,” those turning into farmers, he said.

Speaking without notes and with the skill of a master storyteller passionate about his subject, Urdahl mesmerized his audience, sharing information and a story-style time-line of how the U.S.-Dakota War unfolded. 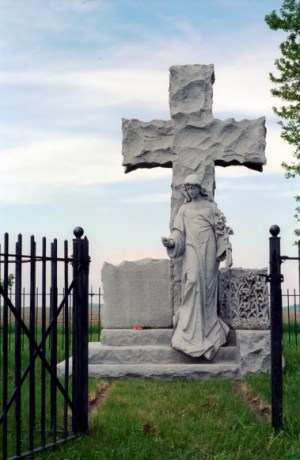 Photo by Audrey Kletscher HelblingThe Milford State Monument along Brown County Road
29 west of New Ulm commemorates the deaths of 52
settlers who were killed in the area. Located along the
eastern edge of the Lower Sioux Reservation, Milford
had the highest war death rate of any single township.

Urdahl’s talk was a refresher course for me, a native of Redwood County located at the geographical center of the War. I’ve always been interested in the conflict and even penned a term paper on “The Sioux Uprising of 1862,” as it was labeled when I was a high school student. My maternal ancestors lived in the New Ulm area in 1862 and were warned by friendly Indians to leave; the families fled to the safety of nearby St. Peter.

“We find throughout the war, friendly Indians warning people to leave,” Urdahl said.

That, and much of what this historian said, I already knew. You’ll find it written in books. But some of what Urdahl shared I had forgotten or never heard such as… 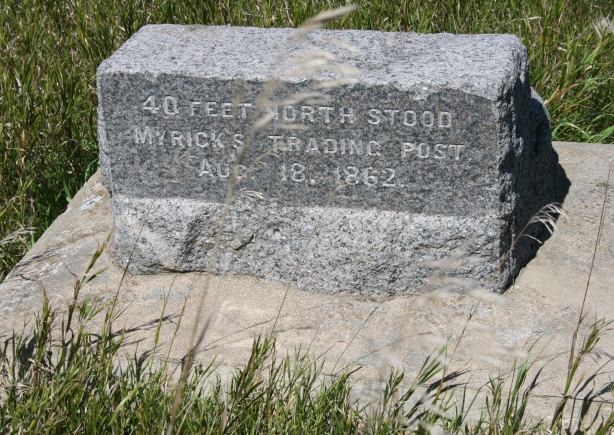 Photo by Audrey Kletscher HelblingTrader Andrew Myrick refused to grant the Dakota credit, remarking, “Let them eat grass.” After an attack on the Lower Agency, Myrick was found dead, his mouth stuffed with grass.

As I listened to Urdahl’s presentation, I wondered how Native Americans would react to the information he shared. What perspective would they offer? Would they disagree with him, challenge his facts, voice their opinions? How would they feel? 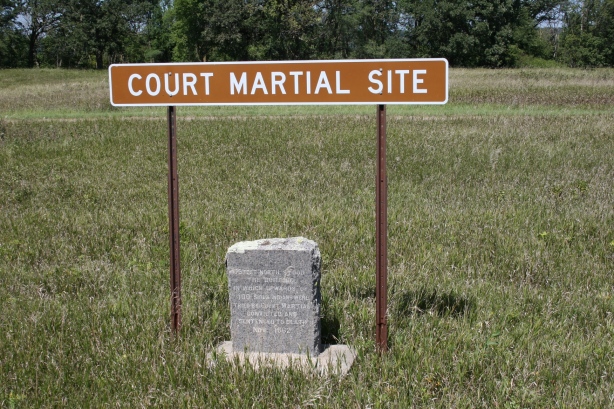 Photo by Audrey Kletscher HelblingThe message on a marker near the Lower Sioux Agency reads: 75 feet north stood the building in which upwards of 100 Sioux Indians were tried by court martial, convicted and sentenced to death Nov. 1862.

“There are still very hard feelings on both sides,” this descendant of Norwegian immigrants told his audience. He occasionally gets e-mails from angry descendants of settlers killed during the U.S.-Dakota War.

Growing up in Redwood County decades ago, I was well aware of the animosity between whites and the Dakota passed down through the generations. I know the bad feelings still linger on both sides.

But perhaps in this 150th anniversary year, we can all (white and Dakota) strive to overcome, to understand and to, finally, forgive. 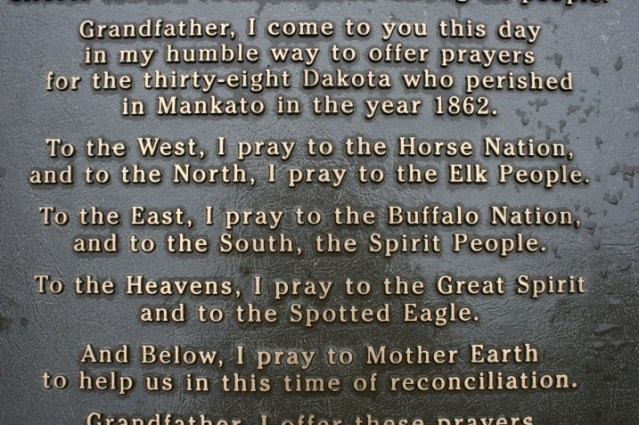 Photo by Audrey Kletscher HelblingWords on a marker in Reconciliation Park in Mankato where 38 Dakota were hung on December 26, 1862. This stands as the largest mass execution in American history. Initially, 303 were sentenced to death. President Abraham Lincoln approved the deaths of 39 and granted a last-minute reprieve to one other.

FYI: All of the above monument images were photographed within the past several years.

A Minnesota politician and writer shares his insights on ‘The Dakota War, a Clash of Cultures’